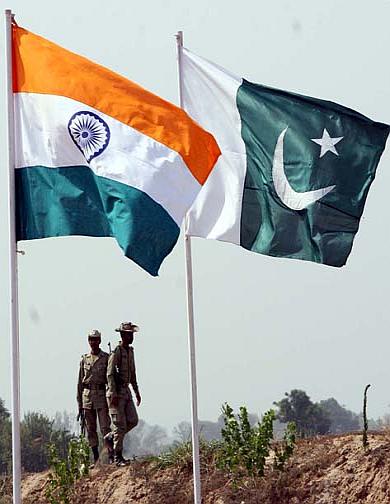 Like Dwight David Eisenhower, I had always thought that both the people of Pakistan and India have wanted peace and that both governments (read establishments) had better get out of their way and let them have it. This thought remained embedded in my mind until I went outside the usual circle of peaceniks on both sides of the border and met people from the ‘other’ side of the ideological divide thanks to the social networking media.

Almost a week before the recent talks between the two foreign ministers, S M Krishna and S M Qureshi, there was a huge cry on the internet from the Indian side against the discussions. These people, as I understand, might not be pro-war but still do not support the dialogue unless Pakistan takes concrete actions against the 26/11 accused who are roaming scot-free in Pakistan. Amid a strong opposition from the domestic front, Mr Krishna came to Pakistan and in his first pre-negotiations statement, reiterated India’s desire for an open dialogue for the sake of long-term peace.

Many analyses have been heard about the course of discussions, the post-discussions scenario, the body language of the two ministers and the ensuing diplomatic spat that ended the episode on a rather bitter note. While the media was not very hopeful regarding the outcome, the stiff stance maintained by S M Qureshi and an equal display of terseness by S M Krishna was far from the expectations of many.

The press conference started with a comparatively lukewarm opening by Qureshi, but gradually showed signs of unprecedented bluntness and marked an unpleasant departure from diplomatic finesse. Towards the end of the event, Krishna had established himself as the mature diplomat, avoiding indulging in personal criticisms. It is important to note that Qureshi continuously used the word ‘engagement’, while Krishna adopted ‘concern’. This difference in the substance of the discourse — a willingness to engage as opposed to the element of distrust as the primary matter of concern — resulted in a poorly written soap opera.

My Twitter account was flooded with taunts by a host of Indians from different walks of life — from media and film celebrities, youngsters from universities to marketing and sales persons — all directed against the Pakistani foreign minister. It seems that generally, Indians were following the Indo-Pak talks with more interest and anxiety as opposed to a strange indifference in Pakistan. Upon my deliberate provocative statements (the usual way to get response from Pakistanis on social media because they seem to be there for fun, not intellectual discourse), some of the responses were of a reactive nature rather than antagonistic to the peace process. Indians, on the other hand, were lambasting their government for making the ‘wrong’ decision to engage in talks with Pakistan. Hawks on both sides were smiling with a “See, didn’t we say earlier?” kind of arrogance.

Things were different a day before Krishna arrived. What went wrong then? It is intriguing to note that Krishna was to meet the prime minister (PM) at 3 :30 pm and see President Zardari exactly two hours later. Around 3:00 pm, he was notified of the change in schedule and that he would call on the president prior to the PM. While he was meeting the president, the PM was giving an audience to the army chief (who had already met the president earlier in the day). Reportedly, both the meetings involving General Kayani were regarding the security situation and the army’s operational matters. When the talks between the two foreign ministers resumed, the atmosphere, according to a fly on wall, had totally changed.

Considering the establishment’s numerous attempts in the past to disgrace the civilian leadership both domestically and internationally, it is particularly disturbing to see the latter not trying to understand the hazards involved if it keeps on kneeling before the former. Whatever truth may be behind the Kargil misadventure, it was the civilian administration that had to take the brunt of embarrassment internationally.

Likewise, in the wake of this badly handled ministerial engagement, it is the political leadership that has made itself a target of international humiliation by appearing unreasonable even in a media briefing.

Analysts have been heard advising those in power not to touch an organised and dreadful militant outfit such as the Lashkar-e-Tayyaba (LeT) and its leader Hafiz Saeed, the alleged mastermind of the Mumbai attacks. The view is that since LeT is not bothering Pakistan as much, it would be better not to divert the military’s attention from the Taliban on the northern front.

If we even have some sense of learning left in our poisoned minds, it might not be very difficult to ascertain that giving militancy, even if it is dormant, a free hand is going to be fatal for Pakistan itself. The moment ( which has probably come) when these ‘dormant’ militant organisations gel with their ideological brethren in the north, turmoil, destruction and blood will be the only things Pakistanis would witness.

Pushing the Pakistani Taliban to the corner, while safeguarding their Afghan parents and potential allies at home would only make them join hands rather swiftly because those fighting against the Pakistan Army need hard cash, logistics and supplies. Who better than the establishment would know that among the entities in the settled plains, which one can provide these services to the warring Taliban? Instead of making dormant militant groups a future asset against regional rivals, we need to deal with them firmly in order to save our country.

The faulty paradigm of strategic depth has to be replaced immediately with an alternative foreign policy free of the establishment’s influence that relies on pulling regional powers with the economic magnet rather than winning their support through planted troublemakers. The current strategy has been tested time and again, and has miserably failed over the past three decades, bringing not only humiliation and shame to Pakistan, but also harm to the people and the economy.

A quick way would be to completely halt all the covert operations in the region, give the political government a free hand to deal with international and regional actors, and allow the economy to be viewed through a lens that sees manufacturing and industrial development as key to progress.

Absence of terrorists and terrorism is going to bring long lost foreign investment to our courtyard. We all are to benefit from this progress, not the civilian leadership alone. The establishment must understand, and accept this.

The writer is a freelance columnist and independent blogger. She can be reached at marvi@marvisirmed. com