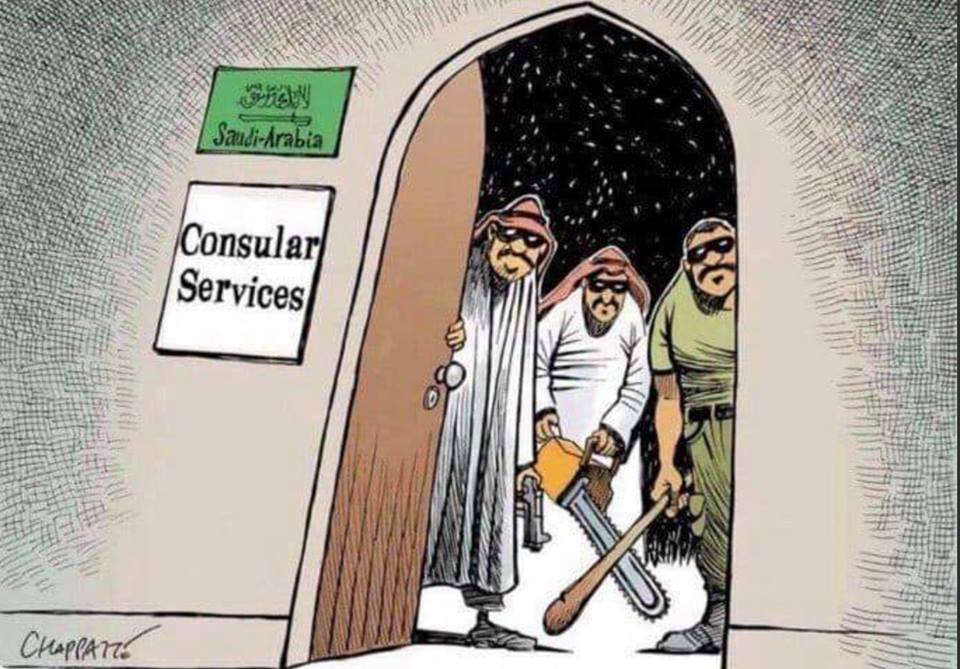 Thank you, Saudi Arabia for exposing the utter hypocrisy and moral bankruptcy of British and American gangsta press and equally gangsta establishment.

You’ve been at it for a very long time. And it seems that finally you’ve got it right.

When you chopped the heads of your own dissidents or women raped by your spoiled brats, the western media and its politicians said they respect your traditions.

When you treated your own women like shit, forcing them to be dressed as Halloween ghosts during the hottest days of summer, the west said that it is our moral duty to accept diverse cultures.

When you decimated civilians in Yemen, the west looked another way and sold you more arms to decimate more people in Yemen.

When you sponsored all kinds of violent thugs all over Balkans, Middle East, Europe and Africa, and encouraged them to take over giant patches of land, the west looked the other way, as long as the oil was flowing.

Finally, some of your sexually repressed thugs flew the plane into American buildings and killed a lot of people in the hope of getting some heavenly virgins. Still, the west decided to attack Afghanistan and Iraq, but not you, in response.

I understand that you began to feel more and more desperate. You sided with Israel against Iran and Syria, and the rest of the world said that it is a moral thing to do and put you on the UN human rights board.

Well, finally, you hit the right cord. Killing innocent people and abusing your moneyed power by buying newspapers, hotels, city districts or think tanks, was not enough to produce an outrage in the west, but when you whacked another cynical morally corrupt journalist that proved too much for the cynical and morally corrupt western press. They decided to stand up for one of their own.

Now you are going to witness a lot of chest beating and finger pointing. But don’t worry. Morally corrupt press would never demand sanctions, let alone military actions against you. You are not a threat to western establishment, and your petty rapes and equally petty murders would never make it act. But you surely deserve a Nobel Prize for exposing hypocrisy. Provided hypocritical Swedes or Norwegians finally establish one, which they should, unless Brits will beat them to it.

Of course, you probably don’t need their millions. But you can always give them to some sort of charity, like White Helmets, for example… Which, of course, will bring you another Nobel Prize. The world does owe you big, and will continue to reward you in the years to come.