Home  »  Newspaper Articles   »   Annihilating Raqqa while allowing thousands of IS terrorists to escape – who was the US trying to kill? 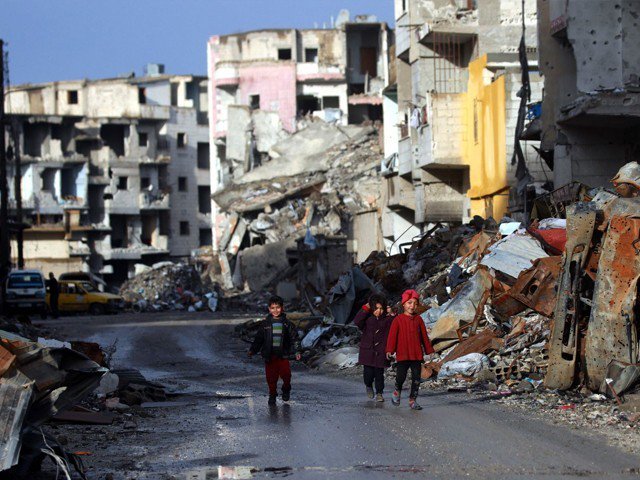 Amnesty International released an explosive report last week, which described the US-led coalition’s disproportionate and indiscriminate war in Raqqa as the US-led “war of annihilation”. The report confirmed what some people have suspected for a while but few have dared to even talk about. Namely, that the United States and its allies have completely destroyed a Syrian city, and left almost nothing but death and destruction in their wake.

In coming to its conclusion, Amnesty researchers visited 42 coalition air strike sites across the city and interviewed 112 civilian residents who had survived the ordeal. The results of their investigation shouldn’t be a surprise to anyone who has been paying attention, as approximately a year ago, Reuters described the plight of one resident in Raqqa who found several of his neighbours lying dead on the street, with cats eating the corpses.

The report even details four cases of civilian families who, between them, lost 90 relatives and neighbours. One family lost 39 in total, all of them allegedly killed by coalition air strikes. This would also not be a surprise to anyone who cared enough to follow this story closely, particularly with the Intercept’s shocking article last year titled, ‘Entire families are being killed by US airstrikes in Raqqa, Syria’.

To be fair, US President Donald Trump did once say he would “take out” the families of Islamic State (IS) fighters. He also once asked the CIA why they delayed an air strike on a terrorist target so as to avoid hitting the house with his family inside it. In other words, the Commander-in-Chief of the world’s military superpower doesn’t have a clue how international humanitarian law works.

“When so many civilians are killed in attack after attack, something is clearly wrong, and to make this tragedy worse, so many months later the incidents have not been investigated. The victims deserve justice. The Coalition’s claims that its precision air campaign allowed it to bomb IS out of Raqqa while causing very few civilian casualties do not stand up to scrutiny. On the ground in Raqqa, we witnessed a level of destruction comparable to anything we’ve seen in decades of covering the impact of wars,” said Donatella Rovera, Senior Crisis Response Adviser at Amnesty International.

Most credible estimates of the assessment of the damage done to Raqqa are that a whopping 80% of Raqqa was uninhabitable after the US had supposedly “liberated” its population. This isn’t something the American media even took on with a conscience, or even felt the need to apologise for; this was something they actively bragged about.

“Looking at photographs of the ruined, desolate streets of what was once the Islamic State’s capital of Raqqa is a reminder of the overwhelming, pitilessly effective military power of the United States,” bragged the Washington Post’s David Ignatius in an op-ed last year. “The heaps of rubble in Raqqa that once housed terrorists and torturers convey a bedrock lesson, as valid now as in 1945: It’s a mistake to provoke the United States. It may take the country a while to respond to a threat, but once the machine of US power is engaged, it’s relentless – so long as the political will exists to sustain it,” Ignatius continued.

For all of Bashar al Assad’s flaws, and despite all of the mounting allegations of war crimes against him, after Russia and Syria retook the city of Aleppo in 2016, hundreds of thousands of refugees returned back to live in the city. An Aleppo cathedral even reopened last year with a classical concert (the US-backed rebels occupying Aleppo previously were not big on religious diversity). I don’t know about you, but I haven’t heard of any concerts taking place in Raqqa thus far.

But here is where things get even more disturbing. On November 13, 2017, the BBC dropped a bombshell report exposing how the US cut a secret deal with “hundreds” of IS fighters and their families to leave the Syrian city of Raqqa under the “gaze of the US and British-led coalition and Kurdish-led forces who control the city”. The US even allegedly allowed the escape of some of IS’ “most notorious” members, as well as its foreign fighters and tonnes of weapons and ammunition.

Almost a month later, Reuters took the story even further and reported that a high-level defector from the Kurdish-led forces in Syria had revealed that the number of IS fighters given safe passage was actually in the thousands, not hundreds. This account was then seconded by a security official in Turkey.

So, on the one hand, you have the US exacting all of its military might and power to completely raze Raqqa to the ground, while on the other, they were doing all of this while allowing their alleged targets to escape safely. This ultimately begs the question: who were they trying to kill that entire time? What crime did the residents of Raqqa commit that they had to suffer and endure this criminal behaviour?

It also cannot be overlooked that the US did all of this without any discernible legal basis. For those of you who need this spelt out: the US does not have any legal mandate to conduct military operations in Syria. This is not some secret or mere mistake or accident, the US government’s own lawyers have been advising them of this, even under the Obama administration.

But don’t take my word for it. Speaking to Syrian opposition members at a meeting that took place at the Dutch mission to the United Nations (UN), then Secretary of State John Kerry stated,

“The problem is that the Russians don’t care about international law, but we do. And we don’t have the basis – our lawyers tell us – unless we have the UN Security Council Resolution, which the Russians can veto, and the Chinese, or unless we are under attack from the folks there, or unless we are invited in. Russia is invited in by the legitimate regime – well it’s illegitimate in our mind – but by the regime. And so they were invited in and we are not invited in.

Despite having this knowledge, it didn’t stop the US from doing what it does best – accounting for at least 90% of the strikes on Raqqa. Ignatius is wrong: it is not a mistake to provoke the United States. Raqqa never provoked anyone. Just like Vietnam, Libya, Korea, Iraq and everywhere else before it, it joins a long list of territories forced to pay the highest price for reasons that cannot and will not ever be justified, let alone investigated by the United States.