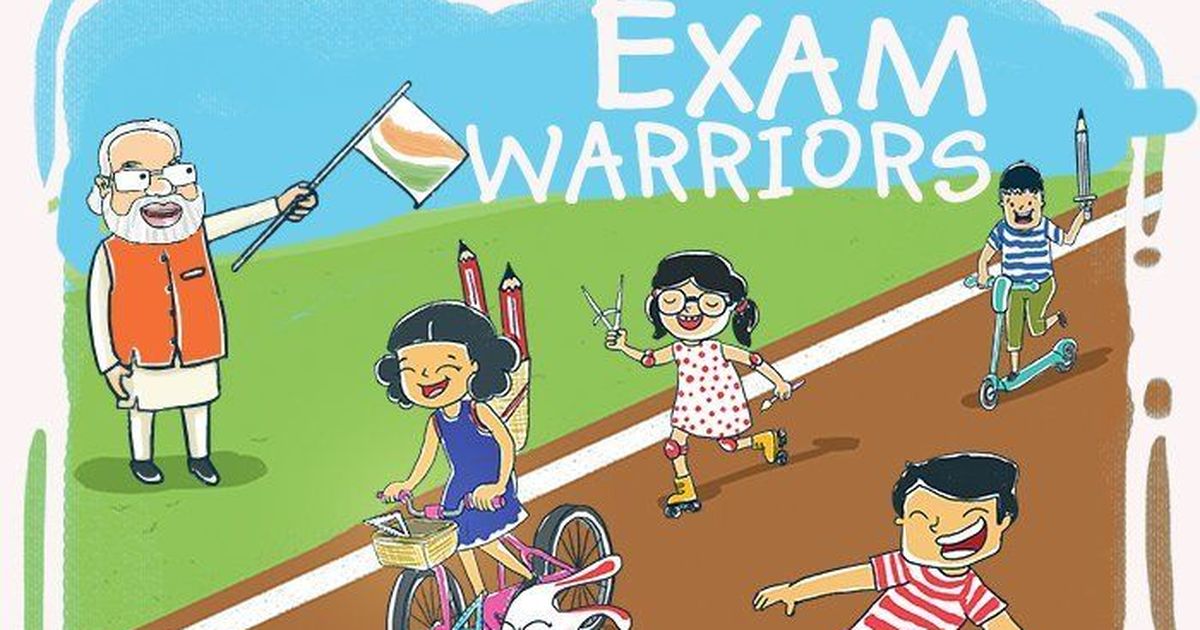 Catch them young. This has always been the credo of the Rashtriya Swayamsevak Sangh, of which Prime Minister Narendra Modi was once a pracharak or fulltime worker. The RSS admits children to its morning shakhas and drills its belief system into them. So it is not surprising that Modi has written a book for high school children, particularly those nervous about taking their Class 10 and Class 12 examinations.

Modi’s Exam Warriors has high production qualities, boasts fetching illustrations and is priced at just Rs 100. It is a handbook that lists 25 “mantras” to help students overcome their fear of examinations to score good grades. It has tips on how they should allocate time for work, sleep and play; cultivate a warrior’s attitude to tests; understand the value of revising lessons; and lists some techniques of memorising key points, among which is Modi’s suggestion that they should coin acronyms, a talent he most certainly has.

He encourages them to do yoga to calm their mind and enhance their powers of concentration. For this, he has chosen specific asanas, illustrated with instructions. He wants students to have fun while taking their school-leaving examinations, perhaps as much as he has while campaigning for elections. Modi has written separate letters to parents and teachers, filled with the sort of advice that is dished out by newspaper supplements every Feb-March exam season.

It is very unlikely that students will find anything new in any of Modi’s 25 mantras, except perhaps for the one on yoga. The other 24 mantras are routine tips that they have already received ad nauseam from their parents and teachers.

Many will wonder why Modi chose to write Exam Warriors. It is, after all, nowhere as sophisticated as Letters from a Father to His Daughter, the collection of 30 letters Jawaharlal Nehru wrote from prison in 1928 to Indira Gandhi when she was 10 years old. Nehru’s letters to Indira covered a variety of profound themes, such as the importance of dialogue and ideas of race and colour. By contrast, Exam Warriors has one defining goal – how to crack India’s notorious examination system.

Modi’s motive is revealed in A Note from the Author. “Being a firm believer in the power of technology, I have integrated this book with the Narendra Modi Mobile App,” he writes. The book has “my Mantra” pages on which students can spin their own mantras and share them on the Modi App. Children will also have an Exam Warrior Community Page on the internet where they can share their achievements with others.

Effectively then, a community of exam warriors will be built around Modi as a totem pole, so to speak. A substantial percentage of these warriors will vote for the first time in the 2019 Lok Sabha elections. If they believe that Modi is in direct touch with them, there’s a fair chance they will vote for him.

Given that most of them were 13 or 14 years old in 2014, it is unlikely they would be aware of Modi’s agenda for which people voted for him overwhelmingly. This absence of memory means that they will not have any grievances about unfulfilled promises or feel disappointed at his performance. Their voting decisions will be anchored in their illusion of having a personal bond with the Prime Minister. Exam Warriors is a technique to implement the RSS’ mantra of catching them young.

Yet the book should leave us perturbed. It is, after all, a manual to mastering the examination system. It is not about pursuing knowledge for the joy of it, for discovering the physical and social world in which we live. There are allusions to it, no doubt. For instance, there is a chapter asking students, Knowledge is Permanent – Pursue it. “The journey of acquiring knowledge is itself a rewarding experience,” he writes. “It leads you to joy and does not burden you with pressure.” But as the book makes it clear, the quest for knowledge is to be valued only because it will help students pass their examination with great grades.

This is the operating principle for most coaching institutes. Kota in Rajasthan abounds with teaching shops that have excellent reputations for being able to help students master the techniques of taking competitive examinations for engineering and medical institutes. Modi has made a significant contribution to the culture that is obsessed with cracking examinations. This approach explains why India’s centres of educational excellence are in decline. The Prime Minister’s attitude to education does not offer us hope that such centres can be rejuvenated.

Exam Warriors claims to delve into the reasons why students fear the examination system but Modi has either not understood their fears or he has chosen not to tell them the truth: India has so few good colleges, gaining admission into them requires a student to score above 95% in Class 12. If that isn’t enough to make an 18-year-old shiver with fright, what else can?