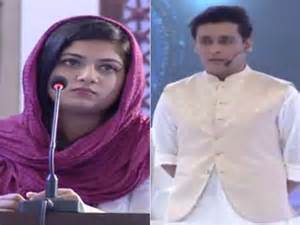 Sahir Lodhi viciously disrupting a young Pakistan woman presenter on his show is a disgraceful spectacle of misogyny, boorishness and poor intellect. There were some areas where many of us may disagree with the young woman but this was no way for a host to conduct a TV show.

For instance, I disagreed with the inclusion of Aafia Siddiqui as a victim but I would still applaud this young lady for condemning acid attacks and underage marriage along with misogyny in general.

The point on which Sahir Lodhi interrupted this lady was not even complete and she was utilising a contemporary style to juxtapose deluded notions of nationalism with ground realities. There was no insult intended for Mr Jinnah. That is not the main point. Even if the young presenter insulted Jinnah, Lodhi’s shambolic attack on her was completely unwarranted. Common courtesy and media ethics demanded that he would have let her finish her presentation. He could have then applauded her for a thought provoking presentation and politely presented a succinct counter argument to those points that merited it.

Instead he proceeded to crush her spirit with a pathetic display of showboating and tangential gibberish that did not even address her arguments. Sahir has always harboured pretensions of being a Shahrukh Khan clone but Shahrukh would never stoop so low to showboat his dramatic range. Foaming at the mouth, Sahir berated his audience for applauding the young lady’s presentation. As the camera panned on to her, she appeared crushed – as any young man or woman would be when confronted by a megalomaniac with a mike and a TV host pulpit.

Sahir needs to visit a shrink and should not be allowed to conduct a TV show. Pakistani media is bad but we have still not plumbed the depths of Al Jazeera or CNN.