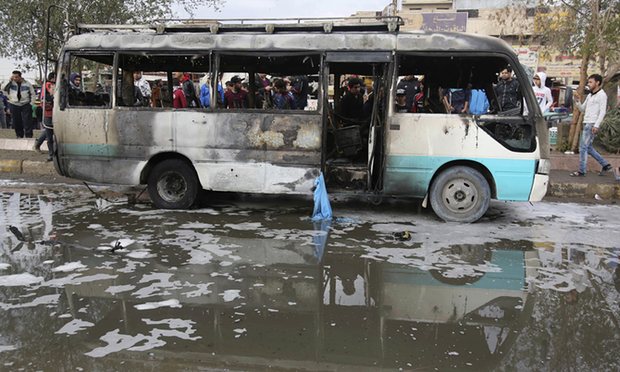 The carnage in Iraq continues. Yet another terrorist attack took place today in Baghdad, the latest in a series of such atrocities that have hit the capital and other parts of the country over the past week. Isis is undergoing a losing battle in Mosul, its last remaining stronghold in Iraq, and it is expected to lose control of the city in the coming months. However, it still has a deadly capacity to carry out terrorist acts. Even without its so-called caliphate, Isis will continue to undermine stability in the country.

The bombings over the past week have barely registered in the international media and the conscience of the international community. The problem is in part a result of war becoming the new normal in Iraq, which has been embroiled in terrorism for more than a decade; but also largely because conflict continues to be framed as political by the international community and media, which attribute the emergence of Isis, suicide attacks and conflict more generally to the lack of good governance and a series of disastrous policies adopted both during and after the US occupation.

This simplification and reduction of terrorist attacks in Iraq to a matter of politics, however, has not been without its consequences. Iraq fell off the radar because of western fatigue and reluctance to continue engaging with, and investing in, Iraq’s dysfunctional political process. Sectarian divisions and endemic corruption have also forced governments to shift their resources and energy away from Iraq’s institutions, which in the longer run will widen the space in which militant groups thrive. The incoming Trump administration, for example, has already indicated that it will no longer commit US resources to the rebuilding of the Iraqi state and others in the region.

Yet there is a failure to realise that Iraq is suffering from more than just political violence and instability. This is a campaign against the country’s array of religious and ethnic groups. Terrorist attacks in Iraq constitute a sustained attack against groups that reject Isis’s warped ideology and interpretation of Islam.

Jihadi groups such as Isis view Kurds, Yazidis, Christians and other minorities as heretics, but it is their attacks on Iraq’s Shias (who represent Iraq’s majority) that would amount to what the United Nations and other international institutions have described as the factors that collectively constitute a genocide: namely, “the deliberate and systematic destruction, in whole or in part, of an ethnic, racial, religious or national group”.

The targets, scale and frequency of the bombings directed at Iraq’s predominantly Shia neighbourhoods, and the intent behind them, readily fall within these parameters. Humanitarian organisations often highlight the death toll in Iraq, which almost always numbers hundreds of fatalities a month and the wounding of many more. Yet these statistics largely reflect attacks on Shia neighbourhoods, shrines, holy cities and pilgrimages.

In addition to weekly strikes on Shia communities, there have been even more deadly coordinated strikes. In July 2016 Isis hit a Shia district of Baghdad and killed more than 300 people. When Isis took control of northern Iraq in 2014, Shias were the victims of its deadliest attack in recent years: more than a thousand Shia army recruits and air cadets were separated from their colleagues, tortured and killed in cold blood in what has since become known as the Camp Speicher massacre.

Isis’s effectiveness also lies in its ability to frame its genocidal campaign against the Shias as a medium through which other grievances can be addressed by broader sections of the Arab Sunni population, who may have issues that go beyond religion – be they political, economic or otherwise.

Generally, the problem for policymakers and politicians is that once the term genocide is deployed, it increases the pressure for action. For example, Iraq’s Yazidis have been targeted incessantly over the past decade. In a single coordinated attack in 2007, al-Qaida in Iraq – the forerunner to Isis – killed more than 700 Yazidis. Yet it was only after Isis seized control of Sinjar, in northern Iraq, in June 2014 and the US-led campaign to defeat the jihadis was launched that crimes against the Yazidi community were recognised as genocide by a number of governments and international institutions.

The campaign against Isis will only ever be half completed if international resources end with the military effort. Acknowledging the continuing attacks on Iraq’s Shias as a genocide is not just a moral imperative: it will also help enable the legal and political mechanisms through which such atrocities are better confronted. Only then can popular opinion be mobilised in favour of the good governance and stabilisation efforts in the country that will ultimately remedy humanitarian crises in the region – and prevent groups like Isis from re-emerging in the future.