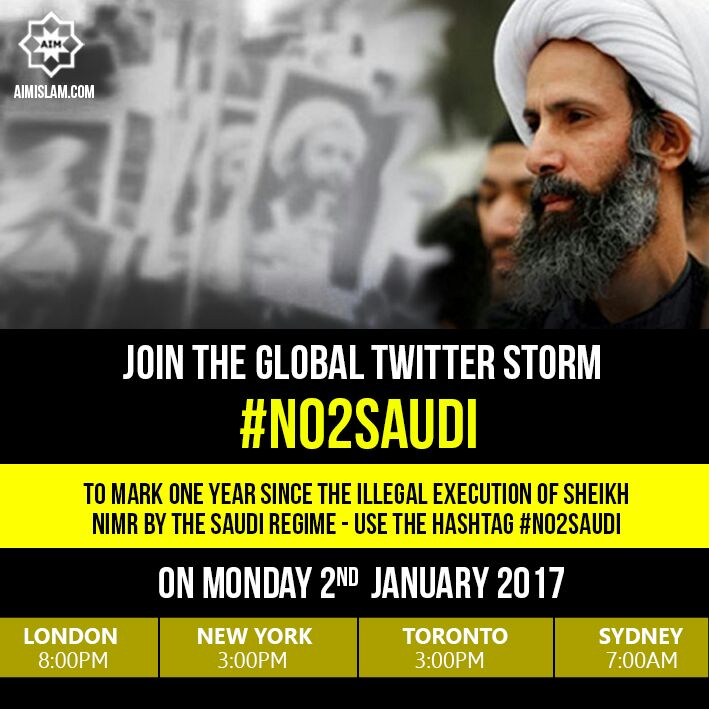 Coming this January 2sd, 2017 a people will remember the martyrdom of one of Shia Islam’s most defining figures: Sheikh Nimr al-Nimr by the brutal regime of al-Saud.

Together a cleric, a teacher, and a pro-democracy activist, Sheikh al-Nimr was a true son of Qatif – patient, resolute, unbending … a servant of AhlulBayt in the purest sense of the word. His life, like his death, echoed of a devotion Riyadh feared above all since it spoke of liberation and truth.

It is truth we ought to remember,  the grand Wahhabist Kingdom of Saudi Arabia dreads most of all … truth and the banner which carries it.

The very premise of al-Saud’s power is anchored in absolutism and enslavement, exclusion and exceptionalism, nepotism and tyranny, fear and bloodshed. Sheikh al-Nimr spoke of another allegiance altogether. He spoke those words that once upon a time under the sky of the Hejaz reached to the Heavens and melted hearts in submission.

It is such Truth, the likes of which cannot be denied the kingdom would like to disappear and forever silence!

But for every fallen martyr, for every swing of the sword, martyrdom came to anchor resistance deeper still. For those who follow, Resistance is no longer a choice, but a way to be – the only declaration of faith worth uttering.

It was Sheikh al-Nimr who said: “Either we live on this land as free men, or die and be buried as pious men. We have no other choice.”

Indeed … when a people is denied the very air it breathes on account its loyalty is to al-Muhammad (the progeny of the Prophet Muhammad) and not the despots of our days, there can never be any other way but through.

And through is what Qatif has done regardless of the great many crimes the Saudi regime continue to rain on the innocent. See not unjust rebellion in Qatif, but rather a call for liberation, an acknowledgement that Freedom is not a prize to be bartered with for the sake of a few silver coins.

As millions will come together this January 2sd to commemorate the passing of another martyr, it is not his death we will mourn since our dead are in fact alive … it is justice we will cry for, it is our chest we will continue to beat in remembrance until such time when Justice is restored.

How irritating it has been for the kingdom to witness the awakening of the very movement it sought died long ago in that bloodied plain of Karbala … how terrifying the roar let out from our Imam’s chest 14 centuries ago, when millions echo today his stand and to his banner hold an unbroken alliance.

Martyrdom I was told come a powerful rallying cry, and a grand cleanse for those still on the fence. Sheikh al-Nimr’s legacy lives through the hope he ignited and the light he let out against absolutism.

And so we remember …

A year ago I wrote the following words: “A prominent Shia cleric, a man of letter and a fervent pro-democracy advocate, Sheikh al-Nimr was above all a man of peace and tolerance. A voice for the oppressed, a teacher for his community and a bridge for all religious minorities, Sheikh al-Nimr came to symbolize resistance against tyranny across not just Saudi Arabia, but the world.

There is such figure in history which command attention for their voices, and their fight is service of humanity. Sheikh al-Nimr was such a man. Beyond his absolute devotion to Shia Islam, and the principles it enounces, it is his love for Justice and Freedom he will be remembered for.

Contrary to the vile propaganda spewed by Riyadh, Sheikh al-Nimr never once called up for violence, or armed retribution against the regime. What he preached, what he, himself demonstrated was peaceful resistance.

In keeping with Islam’s Imams, in keeping with the teachings of the holy Prophet Muhammad, Sheikh al-Nimr devoted himself to the Truth – offering his counsel, and his reproach when officials strayed from the path.”

I stand by them and raise you one promise: Tyranny carries within the very seed of its destruction.

As we welcome 2017 I will ask you this: break the internet for your Sheikh for he spoke for all of us. His courage was not just for Qatif or against the Saudi regime. His words were that of our Imams, his persecution was that which befell our Imams … will you not remember the hooves that trampled over Hussain and the sword which in abomination defiled?