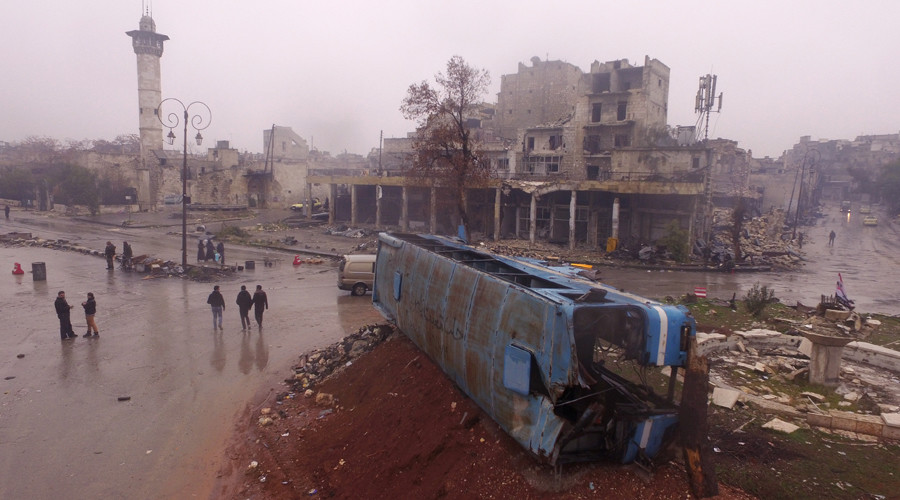 Western media and propaganda have supported the incarceration, torture, abuse and horror that these civilians had had to go through says journalist Vanessa Beeley. Columnist Brent Budowsky and Daniel McAdams of the Ron Paul Institute join the debate.

After liberating eastern Aleppo, government troops are making advances against terrorists that still control several districts of the Syrian city.

In response, the militants have again been targeting civilian areas of western Aleppo.
Meanwhile, the mainstream media continue to blame President Assad and Russia for the civilian suffering.

The grim picture of Aleppo’s liberation painted in the mainstream media has prompted crowds to protesters on the streets of European cities. People gathered in the German city of Hamburg as well as Paris calling to stop the slaughter of people in Aleppo.

Also, the lights of the Eiffel Tower have been turned off in solidarity with the civilians of Aleppo.

RT spoke to independent researcher and journalist Vanessa Beeley, the executive director of the Ron Paul Institute Daniel McAdams and columnist for ‘The Hill’ Brent Budowsky and heard some very different opinions on the Syrian conflict.

RT: Why so much hysteria in the media? Why is no one talking about defeating terrorists – who are Al-Nusra, the Al-Qaeda affiliate in Syria?

Brent Budowsky, columnist for the Hill: Nobody wants to kill and defeat the terrorists more than I do and more than the US, but what is happening in Aleppo is a moral crime against humanity. I agree with what Secretary of State John Kerry said that the Russian government should do everything to stop it, to end it, to support a ceasefire, to end the carnage, the killing and the bombing of innocent civilians. The UN is concerned about it. And I agree with their investigation into possible war crimes. I agree with what the pictures tell us. The bombing of civilians and the massacre of the innocents must stop. My strong advice to President Putin would be to follow John Kerry’s advice and end that carnage and killing right now. So should Assad, so should the Syrian army. It is a joke to treat them as liberators; they are mass-murdering civilians…

RT: Vanessa, what is your reaction to this political view of the events? As a journalist, how do you feel about that?

Vanessa Beeley, journalist: I’ve just returned from three days in East Aleppo, and I would like to 100 percent correct the lies that are being disseminated by the media, think tanks, governments across the West. Particularly your guest who has just uttered complete lies. I’ve spent basically three days in all the various liberated areas of East Aleppo… Many of the testimonies that we received from the civilians that this gentleman has just accused Russia and Syria of bombing, actually told us that they had been incarcerated for the last four years by the various US-backed terrorist militant groups such as Al-Nusra Front, Ahrar al-Sham, Harakat Nour al-Din al-Zenki whom we know beheaded the 12-year old Palestinian child. We were told stories about civilians who were trying to leave this imprisonment when the Russian and Syrian governments opened the humanitarian corridors. I interviewed one lady, I have her on film, where she tells me that one woman, who had been kept in a condition of starvation and malnutrition by these militant factions – who were stockpiling any humanitarian aid that came in and either selling it at extortionate prices. When this lady went on her knees to beg for food, she was shot in the mouth by the militant factions that have been imprisoning these civilians for the last four and a half years. Your [American] media and propaganda have supported that incarceration, torture, abuse and absolute horror that these civilians had had to go through.

RT: The spokesperson of the US State Department said he hasn’t seen the videos of people celebrating on Aleppo’s streets. He’s in a senior position; he must know what he’s talking about, doesn’t he?

Brent Budowsky: We can witness day by day dead babies by dead babies. You can watch the CNN, the BBC, any other television station. The point is – the killing, the bombings of civilians must stop. The dead children and babies is a moral outrage against humanity.

Vanessa Beeley: Can I ask one question? Where are these sources being able to transmit this information from? Because in East Aleppo there is no 3G, there is no wi-fi, there is no electricity. So I’d like to know how these sources are able to get this information via Skype connection to organizations – I’ll use that term loosely – like CNN, BBC, Channel 4. I would very much like to know how they achieve it and how there’re able to do that in East Aleppo. Unlike the corporate mainstream media, I have been in East Aleppo for the last three days, therefore, I’m giving you eyewitness testimony unlike your mainstream media that has not been there and relies upon spurious activists – like the White Helmets, who are funded by every single nation that has a vested and declared interest in regime change in Syria. That is your reliable source. Or perhaps the ‘Aleppo Media Center’ – French Foreign Office funded…

Daniel McAdams, executive director at Ron Paul Institute: This is a good example of what is wrong with the mainstream media. You have a mainstream media source like this Brent Budowsky who goes on television telling us: “You’ve got to believe the US government.” This is the same media that lie through its teeth about Iraq; that lied through its teeth about Benghazi, about the slaughters that were not happening there. There are no foreign media sources in East Aleppo right now. They are not on the ground. They are all using information that they are getting through rebel sources. That is the truth. So, Budowsky, what you are doing right now is you are putting out fake news. And you know it because there are no sources on the ground. You’re saying, ‘Just believe the US government.’ You’re supposed to be in the media! You’re supposed to be doing independent work…

Go back to 2005 in a document from the US Embassy in Damascus was sent back to Washington outlining exactly how to destabilize and overthrow the Syria government, which is exactly the roadmap they took. Who was really responsible for the carnage in Syria? It is the interventionists in the West and their enablers in the mainstream media that push a regime change policy that destroys countries like Iraq, like Syria, like Libya, like Afghanistan, and so on. They are the real perpetrators of this crime.