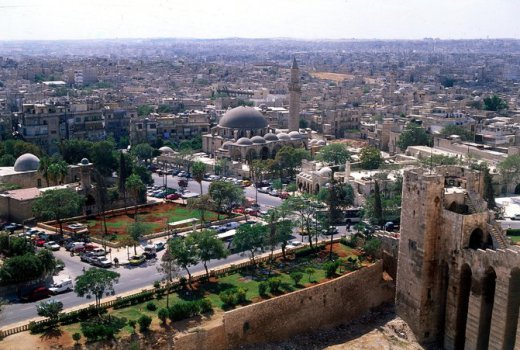 When liberal section of Western Press deals with Syria, It Quits at once its liberal stance, distorts facts and ground realities and insists us to accept religious fanatics ( Salafi-Deobandi Takfirist Terrorist groups)as moderate liberal, progressive forces in Syria. Recently Case of siege of Aleppo city of Syria by forces of Asad and its allies forces is best example of western liberal press’s distortion of facts and reality.

An article appeared in American newspaper daily ‘The  New York Times’ by   OLIVER BULLOUGH titled with ‘Putin in Syria: Chechnya All Over Again’. In that article author totally obfuscated facts and realities about Aleppo and tried to demonize Russia and Putin fully. He was mourning on successful operation made by Russian forces against Takfiri Salafi Terrorists in Chechnya and they had control of Grozny, capital of Chechnya. Oliver Bullough hided that it was Saudi Arabia, Pakistani Generals and even CIA which funded, trained dozens of Chechens during Afghan War and many young Chechens went in Salafi and Deobandi Seminaries of Pakistan and Saudi Arabia where they were taught Wahhabi ideology and that ideology converted them a mass killing machine which destroyed Sufi Sunni dominated culture of Chechnya in 80s and 90s. This was not suppression of Russian forces which played main role in chaos in Chechnya and Grozny but main role played by Saudi funding , training given by CIA and ISI and Wahhabi Ideology. Chechnya saved and could not become another so called Islamic State-IS or Wahhabistan ( Saudi Arabia) due to Putin’s strategy and action. This was Putin who rejected billions of petro-Dollars offered by Saudi Arabia for Russian’s support for Jihad Project in Syria or so called Regime Change Policy of Americans and its allies.

Question is that why American Liberal section of Press is demonizing Russia and Putin on Question of Aleppo in Syria?

Salam Shaheen an  Tadmor, Hims, Syria based journalist and analyst helped us to know real story behind the cry of such western liberal section on Aleppo. He first raises a question on recently demands for more sanctions on Russia, No-fly zones in Syria ,Particularly Aleppo as No-fly zone by US and other western powers. He writes, “  Can you imagine Syria or any of its allies having a “parliamentary debate” about Birmingham, for instance??!! As a Syrian, I feel outraged that a SYRIAN city like Aleppo, is being “discussed” by a NON-Syrian Parliament!!. If this is not imperialism, I don’t know what is!.”

He reveals that Jabhat alNusra and Ahrar alSham are the largest terror groups that control East of Aleppo today.. In October 2013, they were BOTH named by the Western funded HRW as the main terror groups responsible for the horrific MASSACRE of 190 civilians in Lattakia country side, in August 2013- during the so called “Operation to Liberate the Coast”. The “civilised” West wants the Syrian government and its allies to leave these savages alone so 2.5 million civilians in the city of Aleppo can live in “peace”!!!

“These groups, unlike others who participated, were also clearly engaged in the operation from the outset, and their fighters were present during August 4 when the evidence suggests the vast majority of the abuses took place. These groups are:

– Islamic State of Iraq and Sham

“Human Rights Watch has collected the names of 190 civilians who were killed by opposition forces in their offensive on the villages, including 57 women and at least 18 children and 14 elderly men (see Annex 1 for list of victims). The evidence collected strongly suggests they were killed on the first day of the operation, August 4. We identified these individuals as civilians through interviews, video and photographic evidence, or a review of hospital records. Given that many residents remain missing, and opposition fighters buried many bodies in mass graves, the total number of dead is likely higher.”

“According to opposition sources, they are still holding over 200 civilian hostages at this writing. Several residents from Latakia countryside told Human Rights Watch that they saw their relatives in the background of a video published on YouTube on September 7 in which civilians from the area being held hostage by Abu Suhaib, the Libyan local leader of Jaish al-Muhajireen wal-Ansar, are shown.”

So according to established facts about Aleppo 5 groups are controlling eastern Aleppo and all those five are Salafi-Deobandi Takfirist terrorists groups funded by Saudi Arabia, Qatar,Turkey and even Americans also. These groups are being falsely posed as moderate Syrian Opposition. Aleppo has been already another Grozny or Chechnya  not by Russia or Putin but by Wahhabi Takfirist groups controlling Eastern Aleppo.

Aleppo : Who destroyed This City? Russia or Imperialist Block!