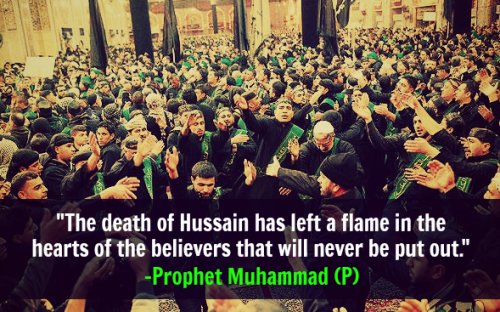 An arrow through the eyes. Three spears in the center of an infant’s chest. Women in chains. A final, lone solider beheaded for his stand against injustice.

History books will never teach you of a man named Hussein or a land named Karbala. You have never learned of the day 72 stood against an army of 30,000 and won. No one has ever told you the story that the great British historian Edward Gibbons said will “awaken the sympathy of the coldest reader.”

You have never truly heard of Hussein, Karbala, or Ashura, and you probably didn’t need to. No, this time in Islamic and global history never meant anything, until now.

More than 1300 years ago, Hussein (as), the grandson of the Prophet Muhammad (as), rode with his family and army to Kufa, Iraq after the people of the city pleaded with him to save them from the oppression of their caliph, Yazid I. During the journey, his caravan was intercepted and diverted to Karbala, Iraq. There, he and his family were denied access to water (in the scorching hot desert) for three days. After a long stalemate, orders from Yazid arrived to kill Hussein and his people. Yazid’s army did just that, murdering 72 of them and taking the women and children they hadn’t killed as prisoners.

No, this isn’t a history lesson, a parable, or a cruel bedtime story. Yes, there have been battles throughout all of history that have been just as evil and dark. No, none of them have been as overlooked and ignored, as this battle.

Currently, in 2016, the story of Karbala means more to Islam and the world than anyone can imagine.

1) Oppression In The Name of Islam

If you think ISIS has only been around for the past couple of years, it’s because you were never taught about the story of Karbala. Hussein was fighting the same ideology almost 1400 years ago. He refused to pledge allegiance to Yazid and his father, who murdered, tortured, raped, and oppressed people in the name of Islam. In reality, they didn’t follow any of the pillars of Islam, nor did they care about the fundamental institutions of society that held people together no matter their culture, race, or religion. Sound familiar?

Was it not for Hussein’s stand, Islam would have been a dead religion long ago (sorry, bigots and Islamophobes). For a long time, this stand against injustice kept Muslims safe and well. Unfortunately, ISIS, AL-Qaeda, Saudi Arabia, whatever you want to call them, had enough and decided to tarnish that image.

Their first victims? The followers of Hussein – Shia Muslims. In Yemen, Iraq, Bahrain, Kuwait, and other countries with Shia populations, the followers of Yazid’s ideologies launched full on attacks. They eventually upgraded to not only Shias, but Sunnis, Druze, Ahmadies, Christians, and any person who stands in their way of tyrannical rule and widespread oppression.

This week alone, Saudi Arabia massacred hundreds of innocent Yemenis at a funeral, for no apparent reason but power and money. Is that not what Hussein died fighting?

Karbala and the day of Ashura (the day the massacre occurred) can teach us a lot about unity. This story is not about Good Islam versus Bad Islam. It’s not about Hussein versus Yazid. It’s not even about Right versus Wrong.

There is the story of a man named Hur (Arabic word for ‘free man’), who was the leader of the army of Yazid, and who decided to break free from his army and fight alongside Hussein when he realized the corrupt ways of Yazid. He was the first to be martyred.

There was John bin Huwai, an Ethiopian Christian who fought alongside Hussein in the name of good and not evil. Despite being an old man, and Hussein urging him to stay away from the battlefield, John gave his life for the stand against oppression.

Hussein, his family, and friends, all of different races, cultures, and religions, stood hand in hand against an army of cruelty. If we, today, in 2016, can put aside our differences and hunger for power and domination, we can easily defeat anyone who stands in the way of keeping humanity safe and inherently good.

To continue carrying Hussein’s message of unity, many of his followers use Ashura and his story to bring all kinds of people together for charity, tolerance, and goodwill.

Perhaps, the most important of lessons we can learn from Hussein and his army is that of resistance and sacrifice. Mahamat Ghandi once said, “If I had an army like the 72 soldiers of Hussein, I would have won freedom for India in 24 hours.”

Each and every story of the martyrs of Karbala can bring tears to your eyes.

The sacrifices range from grown men, to the 6-month old son of Hussein who did not know of good versus evil but only of thirst and hunger. When Hussein held him up and begged that they be allowed access to water, Yazid’s army shot three spears into his heart.

But, the saddest of sacrifices comes from Hussein’s brother, Abbas, who crossed the battle field to the Euphrates River to bring water back to the infants and children. There, he filled a water skin in hopes of quenching their thirst. The soldiers fired an arrow through his eye and cut off his arms, but that did not halt him. He carried the skin of water in his mouth, crawling towards the tents filled with children, until the army approached him and finally killed him.

Eventually, drenched in Abbas’s blood, the blood of his martyred teenage son, companions, and infant child, Hussein stood alone on the battlefield, with women, children, and the ill waiting in tents. He bid them farewell and shouted to an empty desert behind him “Is there anyone to help me?”, When silence was the only response, he marched to fight the army of Yazid, where he was beheaded (much like ISIS does today), stomped on, and his head attached to a pole. The army then tied up the women and children, and marched them from city to city behind the severed head of Hussein, all the way back to their commander, Yazid.

All over the world, people today are resisting to injustice, and they use Hussein as an example.

Once you truly understand the stories of Karbala, listening to each one in specific detail, you will understand why millions of Shia every year mourn during Muharram. It’s why they cry and wear black and why Christians and Sunnis alike join them in paying respects to Hussein and his brother Abbas at their shrines in Karbala, Iraq. Not because it’s merely a sad story, but because sacrifices like this didn’t just keep true Islam alive, but kept good alive throughout the Eastern world.

Your history books never taught you that. Your history books will never teach you of the powerful women, like Zainab, the sister of Hussein, who embodied true feminism and stood up to the tyrant Yazid in his castle, even as they were handcuffed and promised to be raped and sold.

Your books never taught you about the high regard with which so many great men and women (authors, historians, presidents, Nobel Prize winners, artists, etc) held Hussein.

Although victor in resistance and the stand against in justice, Hussein did not live to speak of his victory. The survivors did, the people who witnessed his head being marched through their cities did, and the families of those martyred did.

Still, your children will probably never read a famous history book about Islam that included the Battle of Karbala. It won’t be a story you think of when you remember the greatest battles of mankind. You won’t remember it when you read about ISIS or watch a new CNN documentary about Islam in 2016.

However, you should know it, our children need to learn about it. It teaches us more than how to combat ISIS and stand up to any injustice. We can learn from it feminism, ethics, morality, and unity. Even if we don’t want to teach our kids and our students about Islam and Hussein, we can remove the religious factor of the equation and what remains is a story that has brought people to tears for centuries.

The Lebanese writer Antoine Bara once wrote, “No battle in the modern and past history of mankind has earned more sympathy and admiration as well as provided more lessons than the martyrdom of Hussein in the battle of Karbala.”

Hussein and Karbala are not just a story for Shia Muslims, they are a story for humanity.

Ask yourself, if the Battle of Karbala can teach us so much about standing against the image of Islam that the world and media hold today, then why don’t we ever learn about it?