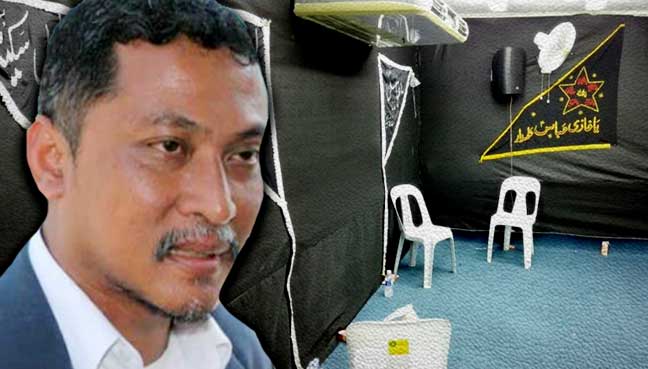 In Afghanistan, the Deobandi Takfiris have killed over a dozen Shia Muslims mourning the death of Imam Hussain (AS). There is nothing new or unusual about it. In the Saudi Arabian financed Salafist assault on humanity in general, and the Shias in particular, the surprise will be there only when or if Shia blood is not spilled.In Pakistan killing of Shia is an accepted norm especially for the Shia Hazara’s whose continued Genocide is considered the norm, there is not a hint of outrage.

The Shias have been paying a price for following their imams with their lives for over a thousand years. They will continue to pay the price in future. So, when a Takfiri Deobandi or Salafi kills a Shia, it is business as usual for the Salafi ideology of hate.

In Nigeria, a government beholden to Saudi Arabia and the terrorism of Boko Haram. Here too, the Shias were the target: They were not allowed to mourn the martyrs of Karbala. But the issue for everyone’s consideration is Southeast Asia where the so-called ‘soft’ Islam prevails. Malaysia, Brunei, and Indonesia are Muslim majority countries in Southeast Asia.

In southern Philippines and southern Thailand , Muslims are in majority. There are some common features amongst Muslim population in those countries: First, they all speak the Malay language. Language variations are there, but when they meet, they have no problem communicating. The written script is the same. Second, they are Malay in terms of race. Third, they all belong to the Shafi school of Islam. And, fourth, democratic traditions are weak there. In Indonesia and Malay, democracy is majoritarian rule. Brunei is an absolute monarchy.

In southern Philippines and Thailand, Muslims have been waging insurgency for independence. These Southeast Asian countries claim to practice the ‘peaceful’ side of Islam. They claim to the world that their version, has no place for terrorism.

Interestingly, Southeast Asia’s Muslim ruling elites trace their origins to Imam Hasan, the second Shia imam. The facts, however, are mind-boggling. Hidden to the world, Shia practices are banned all over Southeast Asia. Shia Muslims are completely ostracized there. They are not allowed to work with the government.

They are regularly arrested if they mourn their imams even when they do so secretly. This is what happened this Muharram. Malaysian police arrested 60 Shia Muslims, most of them Pakistani expatriates, who were secretly mourning the martyrdom of Imam Hussain (AH). The Shias of Southeast Asia have never been arrested for law-breaking, but they are considered criminals because they practice the Shia faith. It appears that the Pakistani Shias will be deported, but what about the local Malay Shias? They will continue to live a life of misery in Southeast Asia. The world should take note of state terrorism against the Shias of Southeast Asia. Their persecution is intense and continuous. They have no hope of respite, let alone seeing an end to their misery.