Home  »  Original Articles   »   Chronology of Events on the Day of Ashura 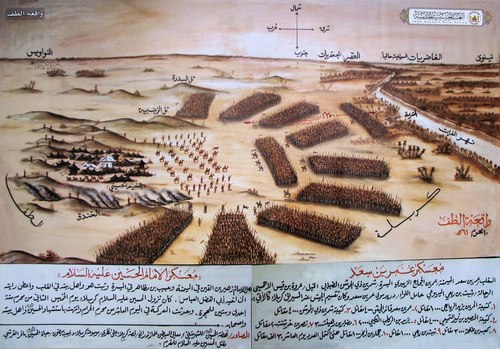 In accordance with the interview held with the deceased Doctor Ahmad Birshak in Gashimari-ye Irani, the event of Karbala falls on the Solar calendar on the 21st of Mehr, year 59 (10th October 680)

The Solar calendar is not like the Lunar calendar in the sense that it changes. The position of the Earth in relation to the Sun is fixated, and it is thus possible to calculate the timings of the city of Karbala on this date and allocate the words of the individuals who have written the Maqtal to the appropriate hours and minutes.

Imam Husayn (as) gives a sermon for his companions after the morning prayers. He invites them towards patience and struggle and then recites the prayer: اللهم انت ثِقَتی فی کل کَرب [O Allah! You are my trust in all calamities]. The Kufans also prayed on their side behind ‘Umar ibn al-Sa’ad and after the morning prayers, became busy in preparing the army and gathering their strength together.

Imam Husayn (as) orders for a trench to be dug around the tents, and asked it to be filled with thorny shrubs so that they could later set it on fire and make them an obstacle for the enemies to attack from behind.

A short time after sunrise, Imam sat on a camel so that he could be seen better. Then he went towards the army of Kufa and with a loud voice, gave a sermon for them. He reminded them of the attributes and merits of himself, his brother, and his brother. He also reminded them that the Kufans had written letters to the Imam (as), and directly conversed with some soldiers in the army of Kufa, and asked Hijar bin Abjar and Shabth Rab’i whether they had not invited him (with their letters)? They rejected any such invitation, and thus the Imam threw their letters towards them and thanked Allah [swt] for establishing his proof upon them.

The sermon of the Imam was approximately thirty-minutes long.

After the speech of the Imam (as), some of his companions such as Burayr – who was known as Sayyid al-Qurra’ (The master of the Qur’an reciters) of Kufa – and according another narration, Zuhayr, gave similar sermons. After the sermon of Zuhayr and Burayr, the Imam asked: “Is there anyone to help me?” A few soldiers become unsure of what to do, particularly Hurr. Another individual by the name of Abu al-Sha’tha and two brothers who were previously from the Khawarij, came towards the army of the Imam. It is not far-fetched that others who felt that the army of Kufa is serious about fighting Husayn, also ended up coming towards the army of the Imam.

It was at this time that the accursed Shimr asked Umar ibn al-Sa’ad as to why he is delaying the battle. Eventually Umar determined that it is appropriate to start the battle, and shot the first arrow towards the army of Imam Husayn (as). He says to his army: “Testify in front of Ubaydallah that I shot the first arrow.” After that, the bowmen of the Kufan army, all together began shooting arrows.

The Imam said to his companions: “Become prepared for death.” A few individuals from the army of Imam Husayn (as) were martyred in this initial attack. Some reports mention that those who were killed in the initial shower of arrows from the army of the Imam was close to fifty people.

After the initial shower of arrows, Yasar the slave of Ziyad bin Abih, and Salim the slave of Ibn Ziyad came out from the army of Kufa to continue the battle in duels. Abdullah bin Umayr requested permission to fight from Imam Husayn (as). The Imam gave him permission and he killed both of them – however the fingers of his left hand were cut.

After this duel, the Kufan army began attacking collectively. Hijar attacked the right flank of the army of Imam Husayn (as), but Habib and his companions stood their ground firmly. At the same time, Shimr was attacking the left flank of the army, where he faced Zuhayr and his companions. Shimr himself was slightly injured in this attack. After pushing back the two sets of soldiers of the Kufan army, Umar ibn al-Sa’ad ordered 500 bowmen to shoot arrows at the army of the Imam. A number of companions of the Imam were killed in this attack. Some reports have mentioned that 50 people were martyred, Ibn Shahr Ashub mentions that 38 were martyred. The first to become martyred in this attack was Abu al-Sha’tha – who was a bowman himself, and shot 8 arrows, killing 5 people. The Imam supplicated for him.

A group of men from the army of Shimr asked to attack the Imam from behind, where the Imam had dug a trench and set fire in it. Zuhayr and 10 other companions attacked them.

After these attacks, the Imam asked his companions to go out individually. The companions of the Imam agreed amongst themselves to not let anyone from Bani Hashim go towards the battlefield until they are alive. The companions were very eager to taste martyrdom. Some become martyred in the sight of the Imam. One of the first individuals to be martyred was the old and ascetic Burayr and after him Muslim bin ‘Awsajah. Habib went towards Muslim and said that he wished he would have been able to execute his last-will. Muslim pointed towards the Imam and said “That is my last-will (i.e. protect him)”. At one point, 7 companions of the Imam were surrounded by the army of the enemy, and ‘Abbas came and saved them.

Habib ibn Mazahir was martyred at the time of Zuhr. It has been recorded that the Imam said to his companions that one of them goes and asks Umar ibn al-Sa’ad to pause the battle for the time of prayers. One of the soldiers from the Kufan army said: “Your prayers are not accepted”. Habib replied to him: “O Donkey! You think that your prayers are accepted, and that the prayers of the son of the Prophet is not accepted?” He went out to fight him, but the soldiers of the Kufan army came to help and Habib was thus martyred. Imam (as) was extremely saddened by Habib’s martyrdom and for the first time he (as) cried on the day of ‘Ashura.

Imam (as) prayed Qasr and in accordance to the rules of Salat al-Khawf. Some companions followed the Imam in congregation, while others continued fighting. Zuhar and Saeed bin Abdullah Hanafi were guarding the Imam. It has been recorded that Saeed bin Abdullah took 13 arrows to the body and was martyred.

30 companions of the Imam were martyred by the end of the prayers, including Zuhayr and Hurr. After the companions had been martyred, the Bani Hashim began to come out to fight. The first person to fight was Ali Akbar, the son of Imam Husayn (as). Other reports mention Abdullah bin Muslim bin Aqeel being the first to go out and fight from the Bani Hashim.

Eventually, only Imam Husayn (as) and ‘Abbas remained. Abbas requested permission to go the battlefield, but the Imam instead asked him to go get water. The enemy was able to split the two brothers, and while ‘Abbas was on his quest to get water for the women and children, both of his arms were cut off. One of the enemies attacked his head with a pole and he fell on the ground. It has been reported that this was the second time the Imam (as) cried and said: “Now my back has been broken”.

The Imam returned back towards the tents and began to bid farewell. He started tearing parts of his shirt and wore it so that when the enemies begin their looting, they do not rob his shirt. While bidding farewell, he took his 6-month old Ali Asghar out of the tents to get him a drop of water, when Hurmala shot an arrow at the baby and killed him. The Imam returned back to the battlefield to fight and initially very few dared to fight him, so they would shoot arrows from far or throw their spears at him. After the Imam (as) was martyred, it has been reported that there were 33 injuries from spears, 34 injuries due to swords on his body.

It has been reported that when the Imam was in his last moments, no one dared to come towards him to finish him. The horse of the Imam went towards the tents and the women and children became aware that the Imam was no longer on the horse. A child by the name of Abdullah the son of Imam Hasan ran towards Imam Husayn (as), but the enemies killed him while he was in the lap of the Imam.

According to the report by Hamid bin Muslim in Tarikh al-Tabari, the time that Imam Husayn (as) was martyred was the time of ‘Asr. It was at this time that Sinan bin Anas attacked the Imam and beheaded him. Other reports mention that it was Shimr who beheaded the Imam.

After the martyrdom of Imam Husayn (as), people began to loot him. It has been reported that all of those who had stolen something from the Imam, became afflicted with incurable diseases. The army began to loot possessions of his martyred companions as well. Umar ibn al-Sa’ad asked his army to stop the looting temporarily. Suwayd bin Mata’ – one of the Shi’as from Basra – arrived in Kerbala after the martyrdom of the Imam and in order to protect the family of the Imam, began fighting the enemies until he was also killed.

It was close to sunset when the head of the Imam was given to Khuli so that he could take it to Ibn Ziyad. After that, Umar ibn al-Sa’ad ordered his soldiers to trample the body of the Imam with horses.

The sorrowful day of ‘Ashura ends with Umar ibn al-Sa’ad holding congregational prayers of Maghrib. Sinan bin Anas started reciting poetry alluding to him being rewarded with gold, for he was able to kill the best of men.