Home  »  Newspaper Articles   »   US State Department: We are not arming Al-Nusra, but our allies might be 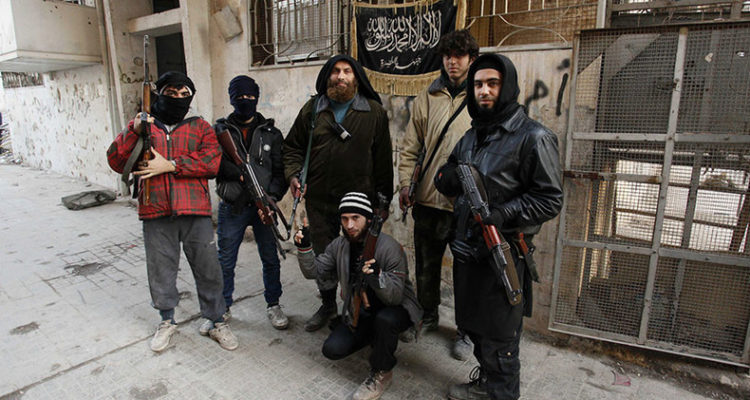 Al-Nusra Front is a terrorist group and the US will never provide it with any aid, said the State Department, reacting to revelations in a German newspaper – while admitting that unnamed US allies might be backing the jihadist militants in Syria.

On Monday, the German newspaper Kölner Stadt-Anzeiger published an interview with an Al-Nusra commander in Syria, identified only as “Abu Al-Ezz.” In the interview, conducted 10 days ago outside of Aleppo, Al-Ezz said that US allies were providing Al-Nusra with tanks and artillery. Abu Al Ezz reported very openly about his backers Saudi Arabia, Qatar and Kuwait.

“The Americans are on our side,” Al-Ezz reportedly said.

The US government has categorically denied providing any aid to Al-Nusra, while admitting awareness that its allies in the region may be arming the militants.

“We would never provide Nusra with any kind of assistance at all,”Toner continued, explaining that the group is a designated foreign terrorist organization.

Asked why the US has been unable to persuade the “moderate opposition” in Syria from separating itself from Al-Nusra, Toner replied it was the rebels’ responsibility, and that they would need a seven-day ceasefire to do so.

He blamed the Syrian government offensive against East Aleppo, which he said would drive “some of those forces, not all of them” into the arms of Al-Nusra. If the Syrian government continues to insist on the military solution, “there are those – not the US – who back various opposition groups in Syria, who might also seek to arm them,” and that would lead to escalation, Toner said.

Asked to clarify if that meant that US allies might be arming Al-Nusra, Toner replied that “countries that support the opposition may want to supply them with assistance.”

Al-Nusra has been receiving funding from Saudi Arabia, Qatar and Kuwait, and has obtained tanks and artillery from Libya via Turkey, according to what the commander, Al-Ezz, told the German newspaper. The group especially appreciated the US-supplied TOW anti-tank missiles.

“The missiles were given directly to us,” he said. “They were delivered to a certain group.”

The issue of Al-Nusra receiving outside aid was brought up by Russia’s ambassador to the UN, Vitaly Churkin, at the special session of the Security Council on Sunday.

“They are armed by tanks, APCs, field artillery, multiple rocket launchers… All of this has been received by them and is still being shipped to them by generous Western backers, with the US, presumably, turning a blind eye,” Churkin said.

“We have to see proof that there is a genuine desire to separate US-allied rebel groups from the Al-Nusra Front, then destroy the Al-Nusra Front and bring the opposition into a political process. Otherwise our suspicions that this was only meant to shield the Al-Nusra Front would only grow stronger,” the Russian envoy added, referring to the ceasefire agreed between Moscow and Washington that collapsed last week.

On Monday, however, the State Department talked about expecting “significant gestures” from Russia or the Syrian government to “restore their credibility” so the talks might continue, suggesting that the Syrian government should stand down its air force and cease the offensive on East Aleppo.

“The ball is somewhat in Russia’s court right now,” said Toner. However, he said the US was not ready to walk away from the talks. “If you’re asking about the legendary Plan B, we’re not there yet.”

Russian Foreign Minister Sergey Lavrov shrugged off the US rhetoric about Aleppo, however, pointing out that it was the US airstrike against the Syrian Army position besieged by Islamic State (IS, formerly ISIS/ISIL) that ended the ceasefire.

“I would like to emphasize that the Americans and their Western allies, for one thing, want to distract public attention from what had happened in Deir ez-Zor,” Lavrov told NTV on Monday.