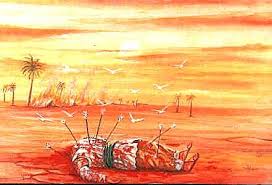 In the city of Elmont, New york renowned Sunni religious scholar Maulana Syed Fakharuddin made a thought provoking speech on Imam Hussain R.A (Son of Imam Ali R.A and grandson of Prophet Hazrat Muhammad Peace Be Upon Him) and talked about on his great sacrifice in Karbala.

He said , “Imam Hussain was lured of great riches,Governorship and other attractive things.If such offers were made for someone other he would be shaken but Imam Hussain did not accept them and refused to accept Yazeed as Caliph of Muslim community.When they could not shaken Imam Hussain through perks and greed then they tried to frighten Imam Hussain.He was threatened that if he would not accept Yazeed as Caliph then his offspring, comrades and others will be slaughtered and bodies of them would be mutilated and women would be taken prisoners.But Imam Hussain stood firm and not only gave sacrifice of his life but lives of his offspring, comrades and other male relative in Karabala.Our Khawja Ghareeb Nawaz ( Pro Poor Saint ) therefore paid great tribute to Imam Hussain for his sacrifice: