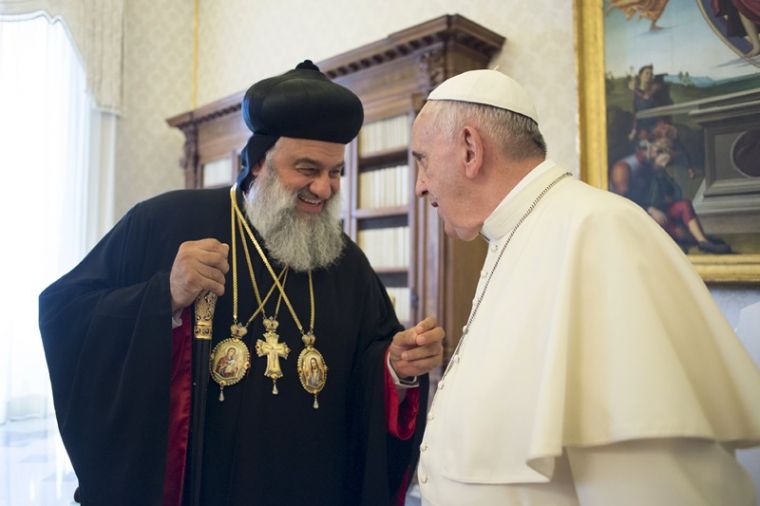 The world leader of Syria’s besieged Christians has issued a heartfelt plea to the West to “stop arming and supporting terrorist groups that are destroying our countries and massacring our people.”

The Patriarch of Antioch, Moran Mor Ignatius Aphrem II, said he was not asking the West for military intervention to defend Christians.

If the West wants to do something about the present crisis, the most effective thing would be to support local governments, which need sufficient armies and forces to maintain security and defend respective populations against attacks.

“State institutions need to be strengthened and stabilised. Instead, what we see is their forced dismemberment being fuelled from the outside,” he told Vatican Insider.

Patriarch Aphrem, head of the Syrian Orthodox Church, said the most blasphemous thing a person can do is to call suicide bombers “martyrs”.

“Throughout its journey through history the Church has also been a suffering Church,” he added. Speaking in the days after meeting the Pope in Rome, he had just returned from Qamishli, his home town, where he met thousands of new Christian refugees who fled after Islamic State jihadists attacked Hassake, in Jazira province.

Islamic State terrorists who die while carrying out their atrocities regard such deaths as martyrdom. They believe it secures them passage to paradise.

The Patriarch contradicted this view. He said: “Martyrdom is not a sacrifice offered to God, like those sacrifices which are offered to pagan gods. Christian martyrs do not seek martyrdom to demonstrate their faith. And they do not wilfully shed their blood in order to obtain God’s favour or some other prize, like Paradise.”

Along with bishops of his church he recently had talks with President Assad of Syria. “President Assad urged us to do everything in our hands to prevent Christians from leaving Syria. ‘I know you are suffering,’ he said, ‘but please don’t leave this land, which has been your home for thousands of years, even before Islam came.’ He said that Christians will also be needed when the time comes to rebuild this devastated country.”

He said the majority of Syrian citizens support Assad’s government and have always supported it.

“We recognise legitimate rulers and pray for them, as the New Testament teaches us. We also see that on the other side there is no democratic opposition, only extremist groups. Above all, we see that in the past few years, these groups have been basing their actions on an ideology that comes from the outside, brought here by preachers of hatred who have come from and are backed by Saudi Arabia, Qatar and Egypt. These groups receive arms through Turkey too, as the media have shown us.”

He said Islamic State was not the Islam that Syrians have learned about andlived alongside for hundreds of years. “There are forces that fuel it with arms and money because it is useful in what Pope Francis calls the ‘war fought piecemeal’. But all this also draws on a perverse religious ideology that claims to be inspired by the Koran.”