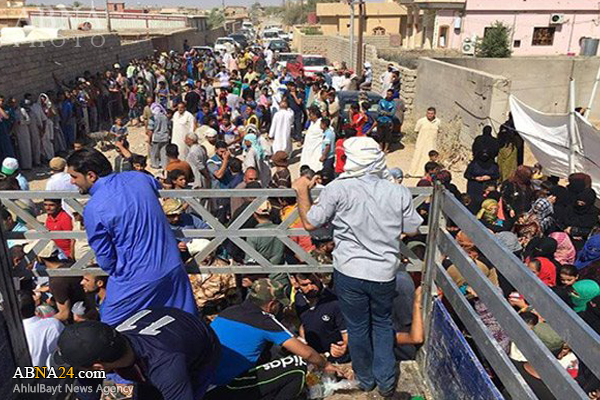 Grand Ayatollah Sayyed Ali Sistani, the highest Shiite religious authority in Iraq, has been trying to extract the seeds of sectarianism that have been planted in Iraq for many years.

Having already issued many fatwas (religious decree) aimed at prohibiting sectarian acts in the torn up country, Ayatollah Sistani has sent food and medicine supplies for 8,000 Sunni families in Iraq’s Saladin Governorate.

The governorate is predominantly Sunni and declared itself a semi-autonomous region in 2011. It is also the home province of former dictator Saddam Hussein and is the site of the shrines of the 10th and 11th Shiite Imams, al-Askari Shrine.

It has also been a fertile ground for ISIS terrorists since the group captured large swathes of territory in the north in 2014. Tikrit and Baiji have been liberated by the Iraqi army and national forces but the cities remain largely affected by the war. It is largely held up by government forces.

The mostly Sunni nature of the governorate has not stopped Ayatollah Sistani from extending a helping hand to its residents. If delivering aid to 8,000 Sunni families in a country wrought with violence does not resonate Ayatollah Sistani’s anti-sectarian stance, then what does?

The grand ayatollah’s anti-sectarian approach stands out throughout the conflict.

For example, after a group of young men organized a march in the predominantly Sunni al-Adhamiyah neighbourhood in Baghdad in October, Ayatollah Sistani was quick to condemn it. The protesters were chanting provocative slogans to insult Sunnis instead of voicing their anger against ISIS and terrorism.

A fatwa was soon issued deploring the abuse of Sunni sanctities. It reads: “This is to be condemned and denounced, and is contrary to the instructions of Shiite Imams.”

On June 11, 2014—not long after ISIS pushed for an expansion in northern Iraq—his office posted an official statement on his website. It explicitly called for unity among Iraqis in the face of terrorism.

“[Sistani] is following up on the recent security developments in the provinces of Ninevah and surrounding areas with great concern. He stresses the need for the Iraqi government and the rest of the political leadership to unify their rhetoric and join efforts to face the terrorists and protect the citizens from these evil acts…” the statement clarifies.

Another statement was later issued requesting “all citizens, especially in the mixed areas where Sunnis and Shiites exist together, to exercise the highest degree of restraint and work on strengthening the bonds of love between each other, and to avoid any kind of sectarian behaviour that may affect the unity of the Iraqi nation and all kind of armed manifestations outside of the official Iraqi army.”

Ayatollah Sistani has been keen to exert efforts to prevent sectarian confrontations from further escalating the country’s crisis.

This, however, does not mean that sectarianism is not deeply weaved into Iraq’s fabric. Years of foreign intervention and manipulation have exacerbated this issue.

“In the case of Iraq, key US policy choices made in the wake of the 2003 invasion, whether purposefully or unwittingly, have led to a progressive, incessant increase in sectarian tensions culminating in violent geographic consolidation of ethnic mapping,” writes Nabil al-Tikriti, Senior Fellow at the U.S Institute of Peace.

Under the title of US Policy and the Creation of a Sectarian Iraq, al-Tikriti refers to Washington’s role in the disintegration of Iraq.

“Invasion enthusiasts were quite clear that the Iraq encountered upon arrival would no longer be allowed to exist. Consistent with Condoleezza Rice’s doctrine of “creative chaos,” early policies eliminated the Iraqi state and symbols of common national identity. Sectarian-minded actors stepped into the vacuum while occupation forces passively observed the unraveling of the national fabric.”

Sectarianism and racism have been the main tools in the hands of foreign powers that interfere in Iraq’s and other regional states’ affairs. A hidden agenda is always kept in their pockets but is almost always implemented through the aid of sectarianism, the seeds of which they plant to grow hatred, violence and divisions so they can reap their interests. However, with influential figures like Ayatollah Sistani urging for and working toward unity, many hope that such plots to further divide Iraq will fail.