Saudi Arabia ‘too arrogant to accept defeat’ in Yemen 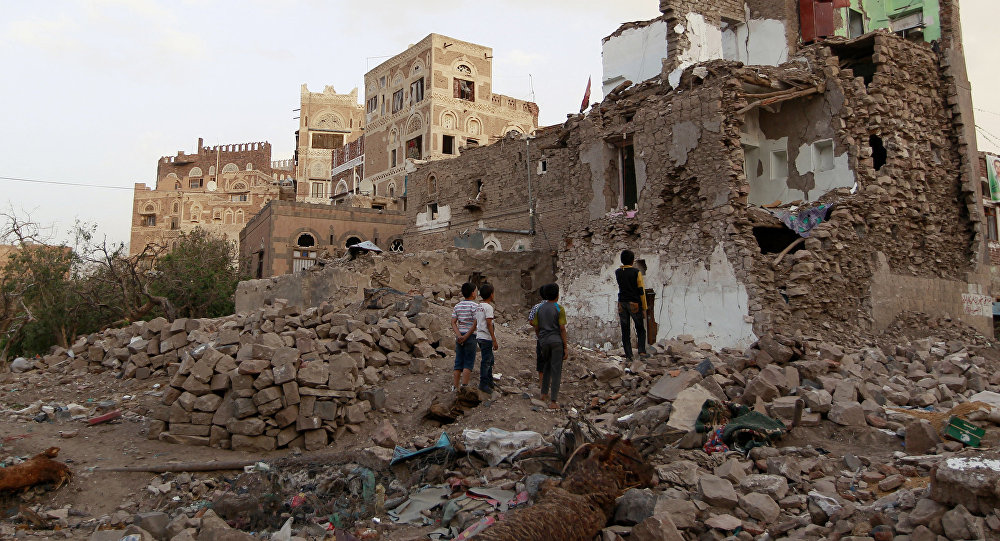 Days after over 100,000 Yemenis rallied in Sanaa against Saudi Arabia for the latter’s continued shelling campaign, US Secretary of State John Kerry arrived in Riyadh to discuss the ongoing bloodbath. The founder of the UK-based Islamic Human Rights Commission, Massoud Shadjareh, spoke with Radio Sputnik about Western involvement and possible outcomes of the war.

Framing the violence in Yemen as a proxy war involving Iran is flat-out wrong, in the words of Shadjareh, who was interviewed by Brian Becker on Radio Sputnik’s Loud & Clear program. Iran, accused by the Saudis of supporting the Houthi political opposition faction throughout the war, hasn’t got any influence on conflict in Yemen, he said. “There’s a total blockade of sea, and [Iranian] weapons cannot get through, personnel cannot get through. Iran has no air forces involved,” Shadjareh noted, offering that the real driving force of the hostilities in Yemen is Saudi Arabia that has been shelling the country since March 2015.

To justify its attempted invasion, the Saudis used the pretext of spreading democracy, which is patently absurd, given that Saudi Arabia is a monarchy, and it practices executions and widely oppresses women, Shadjareh said. Riyadh “wants to be a regional power” and has instigated a number of conflicts, including those in Bahrain, Syria and Yemen, he said. “They want to strengthen themselves so as to ensure the continuation of the royal family’s dictatorship.” The Saudi’s real goal in sending troops Yemen, he said, is to place a puppet president in power who will obey Riyadh. “Here we’ve got one of the richest countries in the region, or in the world, attacking one of the poorest countries, destroying infrastructure and killing children,” he said, speaking of the ongoing Saudi bombing campaign, known to be using US-manufactured weapons.

The war has not only killed over 9,000 people and left the country in ruins, but has also given a “kiss of life” to a branch of al Qaeda now planted in Yemen, he added. Concurrently, “the international community, that is supposed to be the peak of democracy and justice, is involved in it,” Shadjareh stated. Citing an Oxfam report, he observed that the UK is also actively supplying Riyadh with arms and ammunition, which are being liberally used against civilians. “Saudi Arabia couldn’t possibly get engaged in this sort of war without such support,” he said. Riyadh made it clear that its airstrikes, targeting hospitals and schools, are overlooked by the West, Shadjareh pointed out, citing the Saudi Foreign Minister’s claim that US and UK commanders have access to the list of Saudi airstrike targets. “The reality is that not only is Saudi Arabia commiting war crimes, but also those who make it possible,” he added, referring to logistical assistance and weapons supplied by Washington and London. Among the reasons prompting Americans and Britons to turn a blind eye to the “carnage and international law violations” currently being committed in Yemen by the Saudis is the aggressive sale of weapons by the West, weapons specifically provided for the use of Riyadh against the Houthi opposition.

“There are no economic reasons, other than the sale of arms. There’s no oil, geopolitical interest for the US or the UK there. So it really goes back to old-fashioned corruption.” In spite of the far-reaching support of the Western allies, the Saudis are stuck in a quagmire similar to that being experienced by the US in Afghanistan. The Houthi faction, disorganized at the beginning of the war, have become a “fighting machine, manufacturing weapons and being able to sustain themselves, despite all the blockades that had been imposed.” The Saudis, in their wealth and Western friendships, are “too arrogant and don’t want to accept a defeat” that has already happened, he said. Riyadh will drag on the war, refusing to negotiate or discuss peace, which is the only intelligent exit strategy left to the House of Saud.