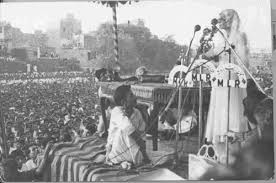 Women in Pakistan are extremely offensive and something needs to be done about this predicament. They affront the misogynists, they speak up, show courage and they have the audacity to live and breath among men.

Be it Sharmeen Obaid Chinoy winning an Oscar for the country or the “bodily motions” of a girls anatomy in a harmless TV commercial, offensive is all that a woman does. It’s like they’re looking for ways to ruin the honor of everyone around them and just create an imbalance in the society.

What our charming chauvinists seem to forget is that Pakistani women have been offensive to their notions of societal norms throughout history. Following are few of the extremely offensive things women in Pakistan have (thankfully) done:

WARNING: This list could be dangerous to the health of an honorable Pakistani man, you can go here instead, if you are weak of heart.

1. When Fatima Jinnah decided to take on a dictator.

Who did she think she was? An aging woman who thought she could take on a Field Marshall and turn the country into a democratic state? Who cares if she is the ‘Mother of the Nation’? We even have the horrible precedent of people fighting back against military dictators because of her.

2. When Begum Ra’ana Liaquat Ali Khan was not contend to spend the rest of her days as a former First Lady.

It surely did offend a lot of people that a woman, a widow of the former Prime Minister did not submerge herself in mourning and vanish from the public eye but took the place of her husband with determination and went on to become the first female governor of a province in Pakistan. Thankfully we’ve never had to deal with having another female governor anymore.

3. When women decided they wouldn’t have gender biased legislation shoved down their throats.

It was during Zia’s era that women decided to take this offensive step. Scores of women took to the streets, protesting against the Hudood Ordinance and to show the dictator their disapproval. Silly women who have a place only in their chadder and chaardiwari of their home came out on the streets and asked for rights? Hahahahahahhahahaha…

Bano Qudsia’s novel Raja Gidh created an uproar in the “conservative circles” because it was inconceivable for a women to pen down a story which spoke of seduction, physical intimacy and overall immodest themes. This offensive Urdu literature has found a place in the likes of Ismat Chughtai and Quratulain Haider’s extremely offensive works.

5. When Major- General Shahida Malik thought she could keep up with the men in boots.

A woman general? What could be more offensive than a woman trying to keep up with one of the toughest professions in the world and winning at it? Major-General Shahida Malik is the first female Pakistani general and her maiden offensive step led to many women choosing army as their career path. Astaghfirullah.

Quite scandalous a scene, you see. A young girl, clad in trousers and shirt, daring to bring a westernized notion of music to our land of pure. An offensive step which resulted in the revolution of Pakistani music industry and set out new genres, all the Ali Zafars and Atif Aslams and Vital Signs are led astray because this silly girl decided to become famous.

7. When Zenith Irfan decided to challenge the notions of femininity.

When Zenith Irfan decided that she had all the right to enjoy riding across Pakistan, it was deemed an inappropriate, highly offensive and unfeminine. This extremely dishonorable step is a start towards social emancipation of women from stereotypical roles that are assigned to them through society. Ab kaun banae ga gol rotiyaan.

8. When Maria Toorpakai decided sports was not just for boys

Hailing from the tribal areas and she thinks she can play professionally? Maria Toorpakai is offending us all ever since she decide to play squash that has brought fame not only to her as an individual but to Pakistan as a country.

A woman from a respectable family background decides to compete with men at their own game and becomes a highly successful entrepreneur, tauba can you even imagine? Women in Pakistan are thankful to Madam Seema Aziz for being the role model so many of them can dream to follow.

10. When Ayesha Farooq dared defy both the laws of gravity and the patriarchal society.

Aren’t girls supposed to firmly place their feet on ground and NEVER think of achieving anything beyond what their gender role specifies? Apparently not, for Ayesha Farooq who unsettled various notions about what women can do and with this one offensive step of hers, paved way for girls to achieve new heights.

11. When the acid attack survivors decided to smile again

And show their attackers that a woman’s body might be harmed but her spirit is the strongest thing on planet. No matter how offensive it would have seemed these acid attacks survivors did not lose themselves to self pity and did not squander in despair but decided to win at life.

12. When Maheen Rahman became the most successful money manager in Pakistan.

This offensive woman has been named as the most successful CEO of an investment banking company in Pakistan. She is also just 39 years old. Should’ve let uncle Shabbir be the CEO after all he is a wise 65 and knows how to keep women under his thumb.

Aik toh she is a girl and that too Pakistani, how dare she go on drawing comic books and instead of ironing her husband’s clothes? And the world calls her the secret weapon of Marvel Comics because she is one of their “geniuses”.

14. When girls decided to sit at dhabas

So shameful, having girls drink. At least thankfully they’re drinking tea. But still, don’t they realize drinking tea in this heat can actually kill their ovaries and how will they produce kids and keep up the family’s name?

15. When this one chose to entertain us all

After saving herself from an abusive marriage, Qandeel went on to become an internet sensation in Pakistan, and beyond. Her offensiveness lives on after her death and people who find a woman’s honor more fragile than their ego’s, cannot even condemn her brutal murder.

16. When Sharmeen Obaid Chinoy won not one but two Oscars before any Pakistani man did

She even got Nawaz Sharif to say that law on honor killing needs to change. Horrible.

18.When they were born

Why do these women even decide to be born?

We owe our offense to women who are brave enough to venture outside their homes in hostile environment to strive for what they believe in. Maybe we need our women to take more such offensive steps because that is the only way hawa ki beti will have equality in our society. But who cares, right?