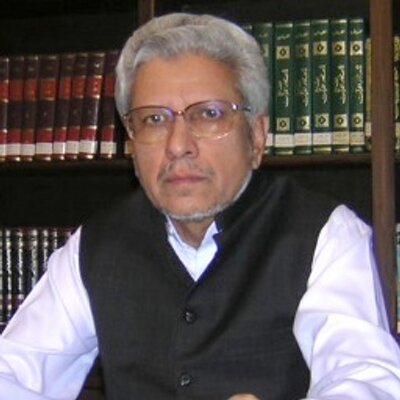 I keep saying that if there is any one who provides the ideological guidance and foundation for the takfiri Islamist ideology, he is Javed Ahmed Ghamidi. Although wahabi, salafi and deobandi top clerics allow their lower grade molvis to criticise and call names to Ghamidi as part of doctrine of best deception but make no mistake he is the most respected takfiri wahabi scholar.

Listen to this video very carefully this explains the takifiri ideology to its minute details. Pay attention to very subtle but important terms like kufr, biraat, itmam-e-hujjat, daawat, munkareen etc. All of these are foundation of takfiri ideology and also don’t miss the real message which he wanted to convey that is sects like bralevi, shia, ahmedi are indeed kaafir. Don’t be fooled by his twisted words he conveys a very simple message in those words, the message of hate towards other people, kaafir and ghair-muslims.

I give you another clue go ahead and compare his sermons with Zakir Naik, Zakir Naik is not as intelligent as him therefore you will easily catch that how he is spreading hate but when you would compare him with Ghamidi you can easily spot the common technique I.e. deception. Ghamidi will never answer anything straight, you ask him are Shia kafir? And he will explain to you what kufr, he would talk 10 minutes quoting all ahadeeth and Quranic verses that would indirectly prove that they are kafir, but at the same time he would ensure that he doesn’t say directly that Shia’s are kafir. In fact he would make extra effort to ensure that even accidentally he does not utter that Shias are NOT kafir.

Similarly ask him about suicide attacks, jihad and darulharb and darulsalam. He would explain to you in detail the basis of Jihad, suicide attacks, darulharb and ameer of Muslims. If you apply his ideology to ISIS and Taliban you will find that they follow him in letter and sipirit. He would however make sure that he hurriedly say that it was applicable only in the times of Prophet and Caliphs but when he says that he would make sure that he clarifies that he is a student of Quran and Sunnah and his interpretation may be wrong. But remember his humbleness is only on the last point for the rest of the takifiri ideology he never expresses his humility in fact whenever he is explaining takfiri ideology he always pretends that he is authority on this subject.

Listen to this video in the context of what I said above and I am sure you will understand the real meaning of this hate preacher.