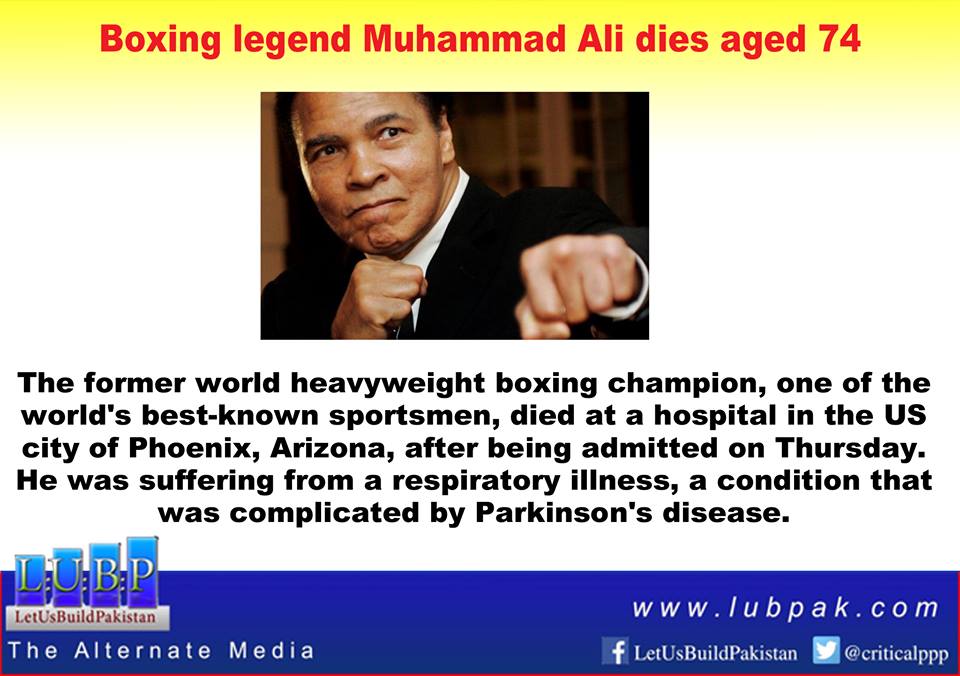 Boxing legend Muhammad Ali – one of the world’s greatest sporting figures – has died at the age of 74.

The former world heavyweight champion died late on Friday at a hospital in the US city of Phoenix, Arizona, having been admitted on Thursday.

He had been suffering from a respiratory illness, a condition that was complicated by Parkinson’s disease.

Ali’s funeral will take place in his hometown of Louisville, Kentucky, said his family.

Tributes for the heavyweight great have been pouring in from across the world.

“Muhammad Ali shook up the world. And the world is better for it,” said US President Barack Obama and his wife Michelle.

Former President Bill Clinton – husband of Democratic frontrunner Hillary – said the boxer had been “courageous in the ring, inspiring to the young, compassionate to those in need, and strong and good-humoured in bearing the burden of his own health challenges”.

Republican presumptive presidential nominee Donald Trump, meanwhile, tweeted that Ali was “truly great champion and a wonderful guy. He will be missed by all!”

over a professional career lasting 21 years

George Foreman, who lost his world title to Ali in the famous “Rumble in the Jungle” fight in Kinshasa in 1974, called him one of the greatest human beings he had ever met.

American civil rights campaigner Jesse Jackson said Ali had been willing to sacrifice the crown and money for his principles when he refused to serve in the Vietnam war.

Nicknamed “The Greatest”, the American beat Sonny Liston in 1964 to win his first world title and became the first boxer to capture a world heavyweight title on three separate occasions.

Crowned “Sportsman of the Century” by Sports Illustrated and “Sports Personality of the Century” by the BBC, Ali was noted for his pre- and post-fight talk and bold fight predictions just as much as his boxing skills inside the ring.

But he was also a civil rights campaigner and poet who transcended the bounds of sport, race and nationality.

Asked how he would like to be remembered, he once said: “As a man who never sold out his people. But if that’s too much, then just a good boxer.

“I won’t even mind if you don’t mention how pretty I was.”

Ali turned professional immediately after the Rome Olympics and rose through the heavyweight ranks, delighting crowds with his showboating, shuffling feet and lightning reflexes.

British champion Henry Cooper came close to stopping Clay, as he was still known, when they met in a non-title bout in London in 1963.

Cooper floored the American with a left hook, but Clay picked himself up off the canvas and won the fight in the next round when a severe cut around Cooper’s left eye forced the Englishman to retire.

Many residents of Louisville, Kentucky, woke up on this hazy Saturday morning to the news: Muhammad Ali is dead.

“I wouldn’t have thought he’d go that quick,” says Kevin Ishmael, a saw operator who laid a bouquet of daffodils at the Muhammad Ali Center, an expansive museum on the waterfront in downtown Louisville.

The news of his death is on every local television station, and the front page of the local newspaper reads simply “The Greatest” over the iconic image of Ali standing victorious over Sonny Liston in 1965.

Flags at Louisville’s city hall will fly at half mast today and the mayor will deliver a memorial service there.

“I cried. I cried like a baby when I found out the news,” says Arnold Mathis, 39, who was on his way to lay a wreath and light a candle at the museum. “It’s so surreal. I know he’s dead, but it hasn’t really set in yet.”

Almost everyone has a personal story about Ali, whether it’s a favourite fight, a glance through a car window, or a trip to his boyhood home, which opened as a museum only last week, the interior recreated as if Ali were still living there as a precocious 12-year-old boy in the 1950s.

Dwight Smith, who was sweeping the empty downtown streets outside the hotel where he works, doesn’t remember the day Ali hoisted him up for photos – he was only a baby – but he uses them as a motivator to this day.

“A great man held me high,” he said. “Go for what you want. If you dream it, you can achieve it. That was one of his mottos.

“I’m just hoping we get a really nice statue of him.”

In February the following year, Clay stunned the boxing world by winning his first world heavyweight title at the age of 22.

He predicted he would beat Liston, who had never lost, but few believed he could do it.

Yet, after six stunning rounds, Liston quit on his stool, unable to cope with his brash, young opponent.

At the time of his first fight with Liston, Clay was already involved with the Nation of Islam, a religious movement whose stated goals were to improve the spiritual, mental, social, and economic condition of African Americans in the United States.

But in contrast to the inclusive approach favoured by civil rights leaders like Dr Martin Luther King, the Nation of Islam called for separate black development and was treated by suspicion by the American public.

Ali eventually converted to Islam, ditching what he perceived was his “slave name” and becoming Cassius X and then Muhammad Ali.

“It’s a sad day for life, man. I loved Muhammad Ali, he was my friend. Ali will never die. Like Martin Luther King his spirit will live on, he stood for the world.” – Don King, who promoted many of Ali’s fights, including the Rumble in the Jungle

“Muhammad Ali was one of the greatest human beings I have ever met. No doubt he was one of the best people to have lived in this day and age.” – George Foreman, Ali’s friend and rival in the Rumble in the Jungle

In 1967, Ali took the momentous decision of opposing the US war in Vietnam, a move that was widely criticised by his fellow Americans.

He refused to be drafted into the US military and was subsequently stripped of his world title and boxing licence. He would not fight again for nearly four years.

After his conviction for refusing the draft was overturned in 1971, Ali returned to the ring and fought in three of the most iconic contests in boxing history, helping restore his reputation with the public.

He was handed his first professional defeat by Joe Frazier in the “Fight of the Century” in New York on 8 March 1971, only to regain his title with an eighth-round knockout of George Foreman in the “Rumble in the Jungle” in Kinshasa, Zaire (now Democratic Republic of Congo) on 30 October 1974.

Ali fought Frazier for a third and final time in the Philippines on 1 October 1975, coming out on top in the “Thrilla in Manila” when Frazier failed to emerge for the 15th and final round.

Six defences of his title followed before Ali lost on points to Leon Spinks in February 1978, although he regained the world title by the end of the year, avenging his defeat at the hands of the 1976 Olympic light-heavyweight champion.

Ali’s career ended with one-sided defeats by Larry Holmes in 1980 and Trevor Berbick in 1981, many thinking he should have retired long before.

He fought a total of 61 times as a professional, losing five times and winning 37 bouts by knockout.

Soon after retiring, rumours began to circulate about the state of Ali’s health. His speech had become slurred, he shuffled and he was often drowsy.

He lit the Olympic cauldron at the 1996 Games in Atlanta and carried the Olympic flag at the opening ceremony for the 2012 Games in London.

How Ali wanted people to remember him

“I would like to be remembered as a man who won the heavyweight title three times, who was humorous and who treated everyone right.

“As a man who never looked down on those who looked up to him…who stood up for his beliefs…who tried to unite all humankind through faith and love.

“And if all that’s too much, then I guess I’d settle for being remembered only as a great boxer who became a leader and a champion of his people. And I wouldn’t even mind if folks forgot how pretty I was.”