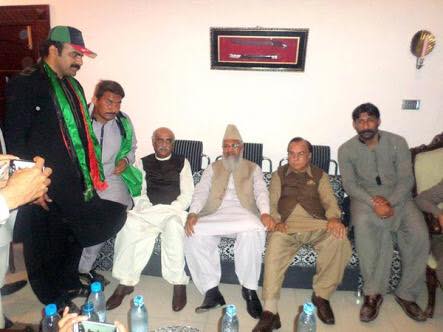 PPP has been blamed for many bad things but one could never think of accusing them of sympathising with terrorists especially after their major leader Benazir Bhutto was assassinated by takfiri terrorists due to her strong stance against Terrorist outfits.
PPP remained a popular target of terrorists due to their left leaning ideology and progressive leadership.

Moreover, PPP has always criticized rival political parties of having links with banned takfiri Deoabandi outfits.
However, presence of takfiri groups like ASWJ  will come as huge surprise to anyone visiting interior Sindh and strongholds of PPP. Right from start of highway to towns and villages in Sindh, one will witness Aswj flags side by side with pics of Benazir Bhutto, Bilawal Bhutto and Zulfiqar Ali Bhutto.

I was informed about aswj gathering at Khairpur, which is predominantly Shia majority area. With more than 65% shia population, local administration of PPP allowing a banned outfit like aswj that has history of terrorism and hate speeches associated with them doesn’t sound like such a good idea at first but when one would visit the area; he or she may easily understand why this is happening. Khairpur, under PPP has not developed at all. Infrastructure, govt provided facilities and water supply are in worst condition to say the least.

In this scenario, PPP needs to get votes using scare tactics and allowing a banned terrorist outfit like ASWJ to carry out their activities unchecked benefits PPP as it would scare the voters of this area to vote PPP or face aswj as there are no other alternative.

The current opposition Leader and resident of Khairpur, Khursheed shah is known as link between aswj and PPP. Both aswj leaders and Shah enjoy good relations and visit each other during personal events.

It’s up to the people of Khairpur now to decide how long they would allow PPP to blackmail them through these tactics. Also, it is also up to PPP central leadership to see how sustainable it is for them to ally with terrorists. Especially the ones who support murder of Benazir Bhutto.