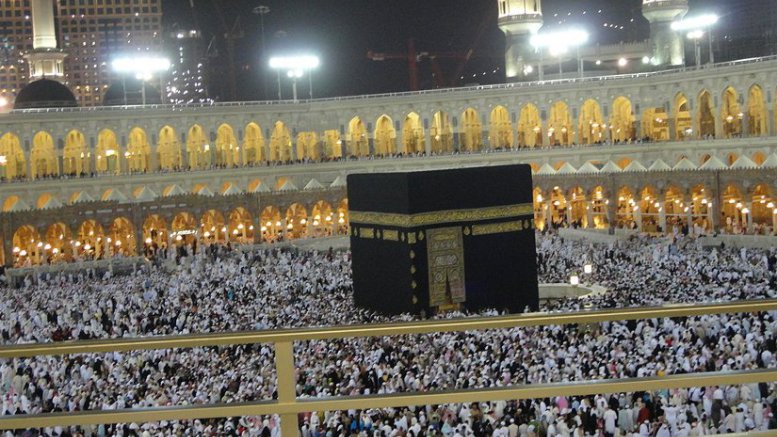 The role of Saudi Arabia in financing global Islamic Jihad needs to be analyzed deeply, since the Islamic Kingdom is considered as the guardian of Islam as the official custodian of Islam’s two holiest places viz Mecca and Medina to which Muslims across the world visit to perform mandatory Haj every year in Kabaa of Mecca. As such, Saudi Arabia is the official Godfather of Islam and any fatwa (Islamic decree) on any matter on Islam by the Imam of Mecca is taken as the ‘last word’ by the 160 crore Muslims living over 54 Islamic countries across the globe today.

Finance is the fuel that propels any work; nothing can be achieved without moneyed investment

. Islamic Jihad, too, at a grand scale across the globe, as we all are witnessing today, is being financed by the petro-dollars of the oil rich Islamic Kingdom of Saudi Arabia. As they say, ‘there are no free lunches in this world’, and Saudi Arabia is financing to spread global Islamic Jihad across the nook and corner of this world for its own benefits in the future.

The fairy tale Arabic story of extravagant luxury of Saudi King and its princes is fueled by hundreds of billions dollars the authoritarian State is earning by exporting its petroleum oil and investing in bonds, shares, etc. across globe. As oil and other natural resources are fast drying up, it will be solely dependent on the profits out of global investments most importantly on the guaranteed profits it will earn from the millions of Muslims coming to Mecca for obligatory pilgrimage every year.

That’s why Saudi Arabia is generously spending in the grab of doing obligatory Islamic charity or zakat (a lucrative investment for it) huge amount of money for spreading Islam all over the world – the more the followers, the more will be its income in the near future. Since Jihad is considered necessary, nay imperative to convert non-Muslims or kafirs to embrace Islam, either by persuasion or force, so the Islamic Kingdom is financing or investing heavily in spreading global Islamic Jihad, especially since 1970 when its ‘oil economy’ started booming.

The word Jihad literally means exertion, striving; but in the pseudo-judiciary jargon of the fundamentalist Muslim, it signifies the exertion of one’s power to the utmost in the cause of Allah and the spreading of belief in Allah in order to make His creed supreme in the world. The importance of Jihad can be gauged from the fact that it appeared 41 times in 23 verses of Quran as well as indirect references to it in about 109 Quranic verses, collectively called as the ‘sword or violent verses’. According to Quran, jihad can be waged by tongue (jihad bil lisan), hand (jihad bil yad) and heart (jihad bil qalb/nafs) but most ‘sacred jihad’ amongst them all is waging ‘holy war’ against the infidels (i.e. jihad by sword/ jihad bis saif) and it is the ‘greatest of all jihads’ striving in the cause of Allah and Prophet Mohammad.

According to Sahih Bukhari [the pre-eminent Hadith (prophetic traditions as Sunnah) collection of Sunni Islam] also, there are about 200 references to jihad in Hadith; about which 98% or 196 of them are clearly referred to in the true sense of ‘jihad by the sword’ [jihad bis saif or qital fi sabili Allahi (armed fighting/killing in the way of Allah)]. It is also the most ancient form amongst the 4 types of jihad, having commonly used both by Salafi and Wahhabi or Saudi Muslims, two most prominent and predominant Muslim clans across globe. Diane Morgan, head author of “The Dictionary of Islam” and British-American Orientalist Bernard Lewis in his book “The Crisis of Islam”, both argue that jihad has a military meaning/militaristic overtone in the large majority of cases.

Wahhabism is a strictly puritanical Islamic religious revivalist movement and today a sect or branch of Sunni Islam that calls to the Muslims across the world to return to the earliest fundamental Islamic sources of the Quran and Hadith, with inspiration from the teachings of medieval theologian Ibn Taymiyyah and early jurist Ahmad ibn Hanbal. Initially, the movement was instigated by an eighteenth century theologian, Muhammad ibn Abd al-Wahhab (1703 – 1792) from Najd, Saudi Arabia. He eventually convinced the local Amir, Uthman ibn Mu’ammar, to help him in his struggle. The movement gained unchallenged precedence in most of the Arabian Peninsula through an alliance between Muhammad ibn Abd al-Wahhab and the House of Muhammad ibn Saud, which provided political and financial power for the religious revival represented by Ibn Abd al-Wahhab.

The alliance created the Kingdom of Saudi Arabia around 1920, where Mohammed bin Abd Al-Wahhab’s teachings are state-sponsored by the successive Saudi Kings and today become the most dominant and predominant form of Islam, though it is considered outside of the four original schools of Islamic jurisprudence, viz Hanafi, Salafi, Hanbali and Maliki. Such is the power of Saudi sponsored Wahhabi Islam, today propagated as the only true form of Islam across the globe, thus, in reality is nothing but Saudi Islam!

Why it is dangerously retrogressive because Wahhabism in its idealization of the time of Mohammad, totally rejects any scientific and technical aspects of modernity. So, Wahhabi Islamic clerics demand banning television, movies, education of girls, participation of women in politics or public life et al which they view as sophisticated Western “cultural attack” (al-ghazw ath-thaqafi) or “intellectual attack” (al-ghazw al-fikri) – an insidious ploy of the West to gradually weaken Islam before finally converting all Muslims into Christianity. Hassan Muhammad Hassan, the author of “The Means of Combating the Intellectual Attack on the Muslim World”, a book published in Mecca by the Saudi-controlled, pan-Islamist Muslim World League argued that the West planned a three-stage offensive: first, the West would seek to convince Muslims that Islam is not a complete way of life but merely folklore; then Muslims would doubt their faith, before lastly, abandoning it.

Wahhabi Islam is against any attempt of modernization, since any modernization is mere westernization – a conspiracy to obliterate Islam and Muslims faith in it.

The Saudis began exporting Wahhabism in the early 1970s when the country’s oil wealth began growing at an ever-increasing rate. The amount the Saudi royal family, both by government donations and the generosity of individual princes, now lavishes on Wahhabist schools, colleges, mosques, Islamic centers and the missionary work of fundamentalist imams around the world is extraordinary.

According Lt. Col. Jonathan D. Halevi of Jerusalem Center of Public Affairs (JCPA), Islamic Jihad has an inbuilt aspect of ‘Financial Jihad’ (FJ) written in Quran itself. He said, “The definition of jihad in Islam, is not confined merely to waging war with arms, but includes several other aspects of support for “holy war”. By FJ, he implied one of the various forms of Quranic Jihads called in Arabic as ‘Al-Jihad bi-al-Mal’ i.e. fundraising for needy Muslims and supporting the jihad warriors – the mujahideen engaged in ‘holy war’ against infidels across the globe. Now, let’s just see how well-known Islamic commentators, authorities on Islamic studies view ‘FJ’.

According to Prof Hussein Shehata of Al-Azhar University in Cairo, one of exalted places of truly ‘pure’ Islamic studies observed, “Through financial jihad Allah gives wealthy Muslims the opportunity to allocate some of their money for da’awa (literally, the call for accepting Islam, here to infidels), the Islamic effort to teach or to convert people to Islam.” Dr. Ajeel Jassem al-Nashami, Secretary General of the International Organization for Zakat (Islamic charity) in Kuwait, argued that at least half of the donations made by Muslims across the globe for zakat should be funneled to finance jihad warfare in Palestine against Israel.

In 2003, a United States Senate committee on terrorism heard testimony that in the previous 20 years (1980-2000) Saudi Arabia had spent $87 billion on promoting Wahhabism worldwide. This included financing 210 Islamic centers, 1,500 mosques, 202 colleges and 2,000 Madrassas (Islamic seminaries). Various estimates put the amount the Saudi government spends via several fronts/foundations on these missionary institutions as up to $3 billion a year. This money smothers the voices of moderate Muslims and the poison flows into every Muslim community worldwide. Indian newspapers recently reported Saudi Arabia has a massive $35 billion program to build mosques and religious schools across South Asia, where there are major Muslim communities in India, Pakistan and Bangladesh. It also plans to spend $ 100 billion dollars per decade in financing global jihad all over the world by 2020 onwards targeting ‘Hindu India’, ‘Jewish Israel’ and the ‘Christian world’ for achieving its ultimate goal – Global Islamification.

Key figures in the September 2001 attacks on the United States were radicalized at mosques in Germany. Britain is now reckoned by some to be the worst breeding ground anywhere for violent Muslim fundamentalists. The links of the Boston bombers and the London butchers to organizations following the Saudi royal family’s religious line are clear. One of the two London butchers, Nigerian-born Michael Adebolajo, was radicalized by the cleric Abu Hamza al-Masri, who headed the outlawed terrorist group Al-Muhajiroun. Similarly, the Boston bombers, Tamerlan and Dzokhar Tsarnaev, hailed from Russia’s southern predominantly Muslim province of Chechnya. Starting in the late 1980s, Saudi Arabia began dispatching Wahhabist clerics and radical preachers to Chechnya.

From Al Sabaab in Somalia, Boko Haram in Nigeria to Jemaah Islamiyah in Indonesia – almost all the Islamic terrorist organizations spreading its tentacles all over the world are inspired by Wahhabi-Salafi world domination Islamic messianic philosophy are funded by Saudi Arabia via creating many Islamic charitable organizations across the globe viz World Assembly for Muslim Youth, International Islamic Relief Organization (IIRO), African Muslims Agency in Kuwait; the Red Crescent Society of the United Arab Emirates; the al Islah Charity, which is linked to Harakat al-Islah, a Somali diaspora group founded in Saudi Arabia; the Muslim World League (Rabitat al-Islam al-alamiyya) based in Saudi Arabia; Dawa al-Islamiyya; and the al Wafa Charitable Society, which is listed as a “specially designated terrorist entity” by the U.S. government for its suspected support to terrorist organizations.

In 2002, the US banned the Saudi-funded ‘Benevolence Foundation’ of New York post 9/11. A June 2013 report by European Parliament’s Directorate General for External Policies reveals how Saudi funded Wahhabi and Salafi groups based in Middle East are involved in the “support and supply of arms to rebel groups around the world.” It warns about the Islamic Wahhabi/Salafi terrorist organisations and claims that “no country in the world is safe from their operations.” It also said that Saudi Arabian petrodollars are bankrolling global terrorism.

Wahhabi Saudi Arabia has been proved time and again as the world’s largest source of funds for all the predominant prominent Salafi jihadist terrorist militant groups, such as Al-Qaeda, the Afghan Taliban, and Lashkar-e-Taiba in South Asia, and donors in Saudi Arabia constitute the most significant source of funding to Sunni Jihadi terrorist groups worldwide. This destructive phenomenon has come to be known as ‘Money Jihad’.

Almost all UN Security Council (UNSC) resolutions banning funding global terror fall flat due to the self-serving conspiratorial connivance of Saudi wealthy regime with ruling world leaders and their families, for instance its ‘strong ties’ with the powerful Bush family of America. Till they themselves are attacked or their family members got killed by the Saudi funded global Islamic terror groups, ‘true lies’ of global jihad and its Saudi connections will continue with impunity. Even Shia Iran’s Tehran Times in June, 2013 called Saudi Arabia’s sponsoring Wahhabi version of Islam as ‘anti-Islam’ and a ‘great threat to Islamic civilization’ itself.

No wonder that why Saudi oil money seems to turn up in many places like Boston, Madrid, Mumbai, Moscow, Paris, Brussels et al making them virtual battlegrounds, where terrorist violence stains the ground with blood from innocent civilians. Today, Saudi patronized Wahhabism is a highly politicized and dangerous school of thought (read Mind Pollution) whose main objective is to counter the growing influence of modern liberal values like secularism, women empowerment, human rights of minorities, gender justice and above all democracy itself.