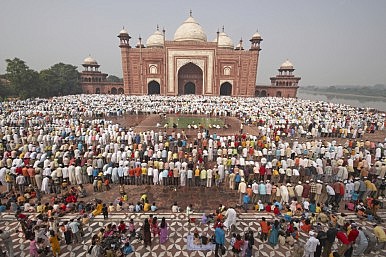 Even a cursory glance at the history of Islam in India will reveal that numerous denominations have coexisted since the religion’s advent in the subcontinent, as early as the 7th century AD. This naturally led to diverse forms of worship and rites, all innately at conflict, finding acceptance. These socio-cultural paradigms underwent periods of crests and troughs that led to them eventually being defined by the more vocally and numerically stronger sections. Islam in India is today undergoing one such trough, that is shifting it from polytheism (shirk, also meaning idolatry) to monotheistic Islam (tawhid).

The drive for Islamic homogeneity

In Tamil Nadu, on January 31, an Islamic congregation took place in Tiruchirappalli district that had notions of initiating a paradigm shift. The congregation (dubbed Shirk Ozhippu Manadu) was designed to bring followers of Islam in the state to understand true Islam (tawhid) and to condemn or abolish its lesser variants (shirk). The campaign dismissed “Dargah” worship (the worship of dead saints), astrology, and other syncretic practices, which have been part of the subcontinent for centuries, as derogatory and un-Islamic. A total of 18 resolutions were passed by the organization, Tamil Nadu Thowheed Jamath (TNTJ), urging Muslims to follow the ways of Islam as dictated and practiced by the Prophet Muhammad. The congregation, which did not respond to media inquiries, was considered a ‘puritanical drive’ by moderates in Islam and followers of such syncretic practices.

Such movements for the “oneness of Islam” are increasingly common in India, especially among the youth. Where does this drive for homogeneity in Islam come from?

The attack against the worship of things that are other than God, in the Islamic world, has been recorded since the time of Ibn Taymiyyah (1263-1328 AD) and Ibn Abd al-Wahhab, very much the intellectual founders of the present regime in Saudi Arabia. The shock and trauma over the downfall of the Islamic empires (especially the Ottomans), the clash of civilizational space with Christianity and science, and the weakening of faith by modern institutions have all brought to the fore previously latent tensions. According to the historian Ibn Khaldun, the renewal of such a morally weak civilization to its commanding heights is only possible through a return to the founding principles of Islam. What better way to revitalize political Islam than to cite the shahada (oneness of God and acceptance of Muhammad) and emphasize the “golden years” of the Prophet Muhammad in Mecca or his conquests in Medina?

Such yearnings have fueled Islamic organizations and leaders in India to seize the moment and drive for the purity of Islam. What starts as a pursuit of the “right way” to practice Islam culminates in redacted interpretations of Islamic history and jurisprudence. Among several such interpretations, the one that is gaining fast acceptance is the Salafi version of Islam, propagated by the Wahhabi school of Saudi Arabia.

Saudi Arabia’s hard power has been overtly visible in the numerous proxy wars being fought in West Asia and North Africa via extremist groups and client states. What has been more covert — yet with greater repercussions — is its soft power influence in regions beyond its immediate regional physical sphere of influence. From its stance as the guardian of Islam and arbitrator of Sunni Muslims, Saudi propaganda has gained widespread credibility among Muslim youths in South Asia. The migration to the Gulf region by South Asian youths for employment and the Gulf petro-dollars that flow inward for the construction of Islamic institutions in the region have bolstered Saudi’s influence multi-fold.

Institutions are vital in the process for a paradigmatic shift and assist in the methodical reorientation of established bodies in society. For Islam in India, mosques, madrasas and jamaats are contributing to a shirt, imparting a more parochial form of Islam to their followers. These institutions generally get their support from Saudi Arabia, either directly or indirectly. Some of them have been shrouded in mystery due to the fact that they do not adhere to a constitution/regulation, receive enormous funds of an unaudited nature, and have links to terror outfits or individuals.

Tablighi Jamaat, which acts as the missionary wing for the Deobandi school, has been in the spotlight for some time for its proselytization of Muslim youths. From sporting beards of a particular length to specific clothes, the jamaat tries to selectively replicate the way Muslims lived in the time of Prophet Muhammad. The organization’s primary goal is to revert “ordinary’” Muslims into believing Muslims.

On the face of it, Tablighi Jamaat acts as a beacon to those lost in jahiliyyah (the state of ignorance of guidance from God), but it stops short of just that. As Travelers in Faith puts it:

Man is a ship in tumultuous sea. It is impossible to repair it without taking it away from the high seas where the waves of ignorance and the temptations of temporal life assail it. Its only chance is to come back to land to be dry-docked. The dry-dock is the mosque of the jamaat.

A spiritual period in a jamaat, in other words, reduces the desires for worldly pleasures and sets the individual on the path to the world hereafter.

This isolation from the reality of everyday society and religion has been one of the primary reasons Tablighi Jamaat has been to be named the “antechamber of fundamentalism.” It is easy to fathom the conflict in a youth’s mind when he or she is unable to come in terms with the socio-political reality of the world outside the jamaat. This mental unrest has in the past created terrorists like Kafeel Ahmed, one of the suspects from India in the foiled Glasgow airport attack. Similarly, Shehzad Tanweer and Mohammed Khan, who helped carry out the July 7, 2005 bombings in the London Underground, were prayer attendees at a Tablighi mosque in Dewsbury. There have even been reports that al-Qaeda used the jamaat’s mosque in New Delhi for cover and shelter.

Such associations, though alleged as circumstantial, float the idea that Tablighi Jamaat might be a fertile ground for terrorism in future. Tablighi Jamaat describes itself as an “apolitical” organization, a convenient way to brush off such allegations. Most religious outfits adopt at least the veneer of being apolitical, but every movement has an objective, as Mushirul Hasan, former vice-chancellor of Jamia Millia Islamia, has pointed out.

In the south, the TNTJ — the group that initiated the anti-shirk campaign – was recently in the news when an attendee at one of its mosques was caught trying to join the Islamic State. Mohammed Nasser, a 23-year-old computer engineer from Tamil Nadu, was apprehended in Sudan, from where he was planning to join IS in Syria. Nasser was an attendee at a TNTJ affiliated mosque. He is one among the many young followers of Jainul Abdeen, the founder of TNTJ and self-styled preacher.

Similarly, the youths from Malvani, a suburban in Mumbai, who got disillusioned about their quest before departing for Syria, were regular attendees at a mosque run by Ahle Hadees Hind. This organization has been extremely vocal in promoting Salafi ideology and opposes polytheism vehemently; the infamous Salafi televangelist Zakir Naik has alleged links with Ahle Hadees Hind.

Most of the above-mentioned organizations and countless others have been funded generously by Saudi Arabia. The funding has been conditional on not only spreading the Wahhabi school of thought, but also reducing Shiiite influence in the region. WikiLeaks documents allegedly showing cables of the Saudi Arabian embassy in India show Riyadh’s increasing concern over Iranian (Shia) influence and the need to supersede it. The cables also mention the huge amount of money being pumped into India to fund the construction and operation of mosques and madrassas, as well as the training of imams.

The New York Times, citing the cables, notes that “some of the costliest projects were in India, which Saudi Arabia sees as a sectarian battleground.” According to the NYT, King Abdullah himself made a personal gift of $1 million from to an Islamic organisation in India. The funded organizations though may feign ignorance or act “apolitical,” but they invariably fulfill the Saudi aspirations of spreading a monotheistic and radical Islam in the subcontinent.

When religion starts to be politically constructed by the few, the “everyday” religion, as practiced and lived by ordinary followers, turns into heresy. The rise in the number of blasphemy cases in Pakistan is directly linked to the spread of Wahhabism in the region, which construes Shia Muslims and Ahmadiyyas as non-believers.

Yet India, with its 180 million-odd Muslim population, has had an extremely stable outlook in the face of the Islamic State and its call for terrorism. Despite the hard-line proselytization undertaken by radical outfits, the rampant poverty that most of the community faces, and the recent meddling into personal affairs by right-wing hindutva groups, Indian Muslims have largely ignored the calls of fanatics. Such a bolstering to the democracy of India should be reciprocated by removing the barriers that might unsettle them in the future.