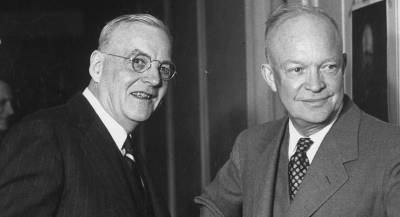 In part because my father was murdered by an Arab, I’ve made an effort to understand the impact of U.S. policy in the Mideast and particularly the factors that sometimes motivate bloodthirsty responses from the Islamic world against our country. As we focus on the rise of the Islamic State and search for the source of the savagery that took so many innocent lives in Paris and San Bernardino, we might want to look beyond the convenient explanations of religion and ideology. Instead we should examine the more complex rationales of history and oil—and how they often point the finger of blame back at our own shores.

America’s unsavory record of violent interventions in Syria—little-known to the American people yet well-known to Syrians—sowed fertile ground for the violent Islamic jihadism that now complicates any effective response by our government to address the challenge of ISIL. So long as the American public and policymakers are unaware of this past, further interventions are likely only to compound the crisis. Secretary of State John Kerry this week announced a “provisional” ceasefire in Syria. But since U.S. leverage and prestige within Syria is minimal—and the ceasefire doesn’t include key combatants such as Islamic State and al Nusra–it’s bound to be a shaky truce at best. Similarly President Obama’s stepped-up military intervention in Libya—U.S. airstrikes targeted an Islamic State training camp last week—is likely to strengthen rather than weaken the radicals. As the New York Times reported in a December 8, 2015, front-page story, Islamic State political leaders and strategic planners are working to provoke an American military intervention. They know from experience this will flood their ranks with volunteer fighters, drown the voices of moderation and unify the Islamic world against America.

To understand this dynamic, we need to look at history from the Syrians’ perspective and particularly the seeds of the current conflict. Long before our 2003 occupation of Iraq triggered the Sunni uprising that has now morphed into the Islamic State, the CIA had nurtured violent jihadism as a Cold War weapon and freighted U.S./Syrian relationships with toxic baggage.

This did not happen without controversy at home. In July 1957, following a failed coup in Syria by the CIA, my uncle, Sen. John F. Kennedy, infuriated the Eisenhower White House, the leaders of both political parties and our European allies with a milestone speech endorsing the right of self-governance in the Arab world and an end to America’s imperialist meddling in Arab countries. Throughout my lifetime, and particularly during my frequent travels to the Mideast, countless Arabs have fondly recalled that speech to me as the clearest statement of the idealism they expected from the U.S. Kennedy’s speech was a call for recommitting America to the high values our country had championed in the Atlantic Charter; the formal pledge that all the former European colonies would have the right to self-determination following World War II. Franklin D. Roosevelt had strong-armed Winston Churchill and the other allied leaders to sign the Atlantic Charter in 1941 as a precondition for U.S. support in the European war against fascism.

But thanks in large part to Allen Dulles and the CIA, whose foreign policy intrigues were often directly at odds with the stated policies of our nation, the idealistic path outlined in the Atlantic Charter was the road not taken. In 1957, my grandfather, Ambassador Joseph P. Kennedy, sat on a secret committee charged with investigating the CIA’s clandestine mischief in the Mideast. The so called “Bruce-Lovett Report,” to which he was a signatory, described CIA coup plots in Jordan, Syria, Iran, Iraq and Egypt, all common knowledge on the Arab street, but virtually unknown to the American people who believed, at face value, their government’s denials. The report blamed the CIA for the rampant anti-Americanism that was then mysteriously taking root “in the many countries in the world today.” The Bruce-Lovett Report pointed out that such interventions were antithetical to American values and had compromised America’s international leadership and moral authority without the knowledge of the American people. The report also said that the CIA never considered how we would treat such interventions if some foreign government were to engineer them in our country.

This is the bloody history that modern interventionists like George W. Bush, Ted Cruz and Marco Rubio miss when they recite their narcissistic trope that Mideast nationalists “hate us for our freedoms.” For the most part they don’t; instead they hate us for the way we betrayed those freedoms—our own ideals—within their borders.

For Americans to really understand what’s going on, it’s important to review some details about this sordid but little-remembered history. During the 1950s, President Eisenhower and the Dulles brothers—CIA Director Allen Dulles and Secretary of State John Foster Dulles—rebuffed Soviet treaty proposals to leave the Middle East a neutral zone in the Cold War and let Arabs rule Arabia. Instead, they mounted a clandestine war against Arab nationalism—which Allen Dulles equated with communism—particularly when Arab self-rule threatened oil concessions. They pumped secret American military aid to tyrants in Saudi Arabia, Jordan, Iraq and Lebanon favoring puppets with conservative Jihadist ideologies thath they regarded as a reliable antidote to Soviet Marxism. At a White House meeting between the CIA’s director of plans, Frank Wisner, and John Foster Dulles, in September 1957, Eisenhower advised the agency, “We should do everything possible to stress the ‘holy war’ aspect,” according to a memo recorded by his staff secretary, Gen. Andrew J. Goodpaster.

The CIA began its active meddling in Syria in 1949—barely a year after the agency’s creation. Syrian patriots had declared war on the Nazis, expelled their Vichy French colonial rulers and crafted a fragile secularist democracy based on the American model. But in March 1949, Syria’s democratically elected president, Shukri-al-Quwatli, hesitated to approve the Trans-Arabian Pipeline, an American project intended to connect the oil fields of Saudi Arabia to the ports of Lebanon via Syria. In his book, Legacy of Ashes, CIA historian Tim Weiner recounts that in retaliation for Al-Quwatli’s lack of enthusiasm for the U.S. pipeline, the CIA engineered a coup replacing al-Quwatli with the CIA’s handpicked dictator, a convicted swindler named Husni al-Za’im. Al-Za’im barely had time to dissolve parliament and approve the American pipeline before his countrymen deposed him, four and a half months into his regime.

Following several counter-coups in the newly destabilized country, the Syrian people again tried democracy in 1955, re-electing al-Quwatli and his National Party. Al-Quwatli was still a Cold War neutralist, but, stung by American involvement in his ouster, he now leaned toward the Soviet camp. That posture caused CIA Director Dulles to declare that “Syria is ripe for a coup” and send his two coup wizards, Kim Roosevelt and Rocky Stone, to Damascus.

Two years earlier, Roosevelt and Stone had orchestrated a coup in Iran against the democratically elected President Mohammed Mosaddegh, after Mosaddegh tried to renegotiate the terms of Iran’s lopsided contracts with the British oil giant Anglo-Iranian Oil Company (now BP). Mosaddegh was the first elected leader in Iran’s 4,000-year history and a popular champion for democracy across the developing world. Mosaddegh expelled all British diplomats after uncovering a coup attempt by U.K. intelligence officers working in cahoots with BP. Mosaddegh, however, made the fatal mistake of resisting his advisers’ pleas to also expel the CIA, which, they correctly suspected, was complicit in the British plot. Mosaddegh idealized the U.S. as a role model for Iran’s new democracy and incapable of such perfidies. Despite Dulles’ needling, President Harry Truman had forbidden the CIA from actively joining the British caper to topple Mosaddegh. When Eisenhower took office in January 1953, he immediately unleashed Dulles. After ousting Mosaddegh in “Operation Ajax,” Stone and Roosevelt installed Shah Reza Pahlavi, who favored U.S. oil companies but whose two decades of CIA sponsored savagery toward his own people from the Peacock throne would finally ignite the 1979 Islamic revolution that has bedeviled our foreign policy for 35 years.

Flush from his Operation Ajax “success” in Iran, Stone arrived in Damascus in April 1957 with $3 million to arm and incite Islamic militants and to bribe Syrian military officers and politicians to overthrow al-Quwatli’s democratically elected secularist regime, according to Safe for Democracy: The Secret Wars of the CIA, by John Prados. Working with the Muslim Brotherhood and millions of dollars, Rocky Stone schemed to assassinate Syria’s chief of intelligence, the chief of its General Staff and the chief of the Communist Party, and to engineer “national conspiracies and various strong arm” provocations in Iraq, Lebanon and Jordan that could be blamed on the Syrian Ba’athists. Tim Weiner describes in Legacy of Ashes how the CIA’s plan was to destabilize the Syrian government and create a pretext for an invasion by Iraq and Jordan, whose governments were already under CIA control. Kim Roosevelt forecast that the CIA’s newly installed puppet government would “rely first upon repressive measures and arbitrary exercise of power,” according to declassified CIA documents reported in The Guardian newspaper.