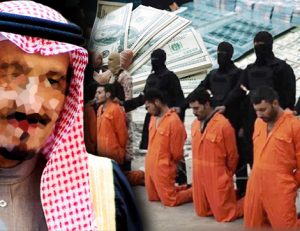 The West’s willingness to allow Saudi Arabia to spend over $100 billion spreading Islamic extremism across the globe and financing terror has led to the emergence of the Islamic State (ISIS), as well as the growing terror threat to the Western world.

And if ISIS achieves its goal of building a dirty bomb—a radiological device designed to spread radiation with conventional explosives—and then setting it off in a major city, the scale of atrocities that can be directly attributed to Saudi Arabia will rise exponentially.

The role of Saudi Arabia, and its Arab allies like Qatar, as the master funders of terror began decades ago when the House of Saud began exporting Wahhabism, its medieval version of Islamic doctrine, to Europe and other parts of the world. Wahhabis preached hatred of non-Arabs, namely Shiites, as well as Christians and all other religions. Imams versed in this theology in Saudi religious institutions were taught to preach that the followers of all other religions were infidels not worthy of mercy.

One can now see in Wahhabi doctrine the roots of the savagery in the mass executions of Christians and non-Arabs by ISIS in Syria and Iraq. The perpetrators of these heinous acts felt as if they were ridding the world of infidels, and the more the better.

The Saudis exported their ideology in a very clever way. In the 1980s, they began a program of building mosques in cities as far flung as Brussels and Karachi, Pakistan. They then dispatched preachers from Saudi theological centers to run those mosques. As part of their strategy to dominate Sunni Islam, they devoted billions more dollars to creating schools called madrassahs. The aim was to give the Muslim poor in many countries free education while indoctrinating the most young and vulnerable in Wahhabi principles. As a consequence, madrassahs from Europe to Pakistan, the Philippines, and Indonesia have since produced a constant flow of recruits for terror groups worldwide.

In Europe no effort was made to counter Saudi preachers advocating revolution or to prevent them establishing a bridgehead into prisons where they recruited criminals. The fruits of the prisons strategy have been evident for some time in Britain, France, and Belgium. Some of the terrorists, who blew themselves up in Paris and Brussels, had converted to Wahhabism in jail.

In tandem with the spread of virulent sectarian principles, Saudi Arabia began diverting huge sums of money to terror groups, starting with al Qaeda. They also used freelance arms dealers to provide the terrorists with weapons.

Congressional intelligence committees are sitting on a pile of classified Federal Bureau of Investigation documents linking the Saudis to terrorists groups, including the group of Arabs who were willing partners in the September 11 attacks. Those files, which remain hidden from the American public, show that the Bush administration allowed Saudis to flee the United States after the 9-11 attacks.

What is most shocking is the complicit role of the West in treating the House of Saud as an ally while it has continued to undermine Western policies across the globe.

One of the leading Saudis responsible for arming, training, and financing ISIS, and its fellow travelers in Iraq and Syria, is Prince Bandar Bin Sultan, who has been featured before in the pages of this newspaper. This member of the Saudi royal family was known as “Bandar Bush” when he was Saudi ambassador in Washington, due to his close ties to the Bush family. He was later head of his country’s national security and ran its foreign intelligence operations during 2012-2014.

In 2014, Senator John S. McCain III (R-Ariz.) was so thrilled with Bandar’s work he told CNN, “Thank God for the Saudis and Prince Bandar.” Of course, McCain, like so many of his colleagues on Capitol Hill, conveniently ignored Bandar’s role in arming the Islamic militias like al Qaeda and al Nusra that were steadily merging into ISIS. McCain was, in fact, applauding a regime that had the blood of Christians on its hands. The senator should also have been aware that Bandar flew fellow Saudis out of the U.S. on his private jet in the wake of the Twin Towers’ collapse.

It is notable that, shortly before 9-11, Bandar Bush told Sir Richard Dearlove, head of Britain foreign intelligence agency MI6, that a time was coming when it would be “God help the Shia.” He was in effect foretelling how the Saudis through their terror surrogates would slaughter Shiites. Perhaps he forgot to mention the slaughter would include Christians.

Despite the mounting evidence of the Saudi role in terror, Washington prefers to promote Russia as the real threat, conveniently ignoring the sinister House of Saud and its allies, the Turks.

Algerian journalist Kamel Daoud put it best when he said: “Daesh [ISIS] has a mother: the invasion of Iraq. But it also has a father: Saudi Arabia and its religious-industrial complex. Until that point is understood, battles may be won, but the war will be lost.”