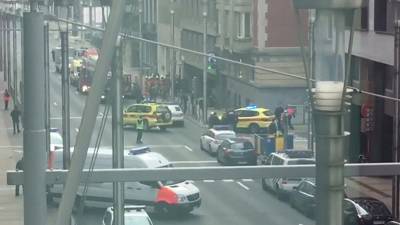 The West has brought terrorists attacks on their own people by supporting for decades Islamist terrorists trying to achieve geostrategic objectives, said the editor of Politics First Marcus Papadopoulos, commenting on the Brussels blasts.

“The roots of these terrorist attacks are Western foreign policy. For the last 30 years or so America in particular, but also Britain and France have been working with Islamist terrorists to try and achieve geostrategic objectives. And this is what happens when you get into bed with repugnant dangerous extremist people – it comes back to haunt you,” he told RT.

“Britain and France intervened in Libya and turned that into a failed state. Now it is ruled by various Islamist groups including ISIS. America, Britain and France, and their regional allies – Turkey, Saudi Arabia, and Qatar – have been supporting Islamist groups in Syria to try and overthrow the Syrian government… We have to analyze Western foreign policy, and by doing so, we will see that the West has brought these terrorist attacks on their very own people,” Papadopoulos added.

French President Francois Hollande said Tuesday “the world is facing a global threat, which requires a global response.” Papadopoulos agrees with the statement.

“Of course it is, but there is more than meets the eye to this. For example, the Syrian people on a daily basis are victims of terrorist attacks. Those terrorists, who are carrying out those attacks against Syrian people up and down the country on a daily basis have been backed by America, Britain, France, Turkey, Saudi Arabia, and Qatar,” he told RT.

“The French President is right there is a global threat from terrorism,” Papadopoulos said. Yet, he argues, France has played an important role in bringing this terrorist threat to the streets of, for example, Paris.

“The threat from Islamism terrorism would be nowhere near as powerful as it is today without the support they receive from the West. And the West uses them trying to achieve geostrategic objectives,” Papadopoulos continued.

Papadopoulos suggests in the immediate term Europe has to have borders again.

“Schengen has failed and it is finished. But if we want to tackle the reasons for the terrorist threat in the long-term, and we must always think of the long-term. We have got to see an end to Western foreign policy, in which it uses Islamist fighters to trying to achieve geostrategic objectives,” he said.

According to Papadopoulos, Syria at the moment is the principle root for Islamist terrorism.

“In order to reduce the threat Europe is facing from Islamist terrorism, the West and its regional allies – Turkey, Saudi Arabia and Qatar must – end all forms of support to all militant groups in Syria,” he said.

Papadopoulos proposes the Americans, the British, and the French tell Turkey: “Close your border with Syria. Do not allow Islamist fighters to cross into Syria anymore. Do not allow jihadists to cross from Turkey into Syria.”

Then, he said, “eventually the terrorists in Syria, the Islamist fighters will be starved, and the Syrian army, which is the heart and soul of the fight against the Islamist terrorism, backed by the Russian military will be able to liberate more and more territory which is currently occupied by ISIS, al-Nusra, the Free Syrian Army, who are all Islamist groups…”

According to Papadopoulos Turkey played a crucial role in the Syrian conflict and allowed its territory to “become a training camp for Islamist terrorists to go into Syria.”

“ISIS of course in the last year or so has taken over regrettably oil fields in Syria – they have managed to push the Syrian army out; and ISIS has been selling oil to Turkey. And Erdogan, the Turkish president, a close friend and ally of America, Britain and France has been benefiting financially.”

But the picture is bigger here as Ankara is “a puppet of the West,” the analyst said.

“America has given the green light to Turkey to destabilize Syria, to use Islamist terrorists, jihadists to try and destroy the Syrian government,” Papadopoulos told RT.