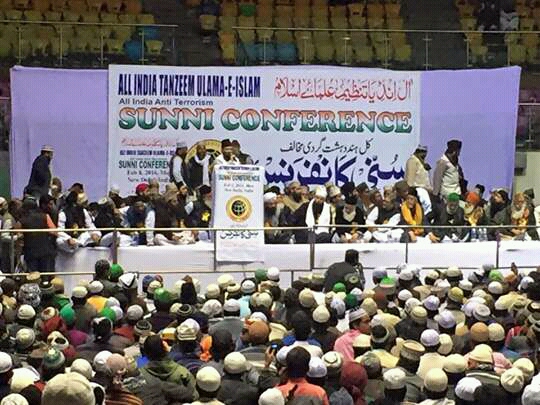 NEW DELHI: Prime Minister Narendra Modi appealing to the clerics of Barelvi sect among the Muslim Sunni community to step up their efforts to counter extremism, the clerics have raised a clarion call against the Wahabi ideology and demanded the government to clear the Waqf Boards across the country off the control of Wahabi elements.
An anti-terrorism Sunni conference organised by All India Tanzeem Ulama -e- Islam (AITUI) in the national capital on Monday spewed venom against the Wahabi ideology and cautioned the community against the radicalisation being funded by the Saudi and Qatar petro-dollars.

“AITUI clearly states that this radicalisation is being spread within Muslim community like a virus by Wahabi elements funded by Petro dollars of Saudi Arabia & Qatar … AITU wants to highlight the fact that ISIS is active in Indian under different names and banners. These ISIS fronts are organising conferences, and programmes to show their presence in India to their Saudi and Qatar-based funders and to assure them that they are present in India and working for the vested interests of Wahabis Monarchies of Saudi Arabia & Qatar,” declared the conference of Barelvi clerics at Talkatora Stadium in the national capital while demanding the government to ban organisations promoting Wahabi and Salafi objectives.
“We want to say that these radical organisations are working for Wahabi and Salafi objective of radicalising youth in the name of social revolution. AITUI demand that the activities of these extremist organisations be banned as they are working against national security,” the conference demanded, asserting that “Wahabism is part of dirty politics and has nothing to do with Islam”. The impressive gathering of Sufi Sunni Muslim community members in the national capital, in this backdrop, also pitched its battle against the dominance of Wahabi or Deobandi followers in the affairs of Waqf Boards and minority educational institutions and prevalence of their teaching through various forms in the country.

The gathering holds significance in wake of Prime Minister Narendra Modi’s appeal to members of Barelvi sect to counter extremism by way of Sufi version of Islam “In his remarks during a meeting with a delegation of 40 Barelvi Sufi Scholars from various parts of the country this evening, the Prime Minister said that forces of extremism are attempting to weaken the Sufi ideology today. He added that it is essential for Sufi saints and scholars to counter these forces through various avenues including on social media, so that the ideology of extremism does not take root in India,” a government communique had revealed about Prime Minister’s appeal to the community of Barelvi Sufi scholars in their meeting in August last year.

While the August communique by government did not refer to Wahabi ideology, the gathering of Barelvi Sufi clerics in the national capital today launched a tirade against the Wahabi ideology and sought government action to contain the followers of Wahabi sect in Waqf Boards among other things.