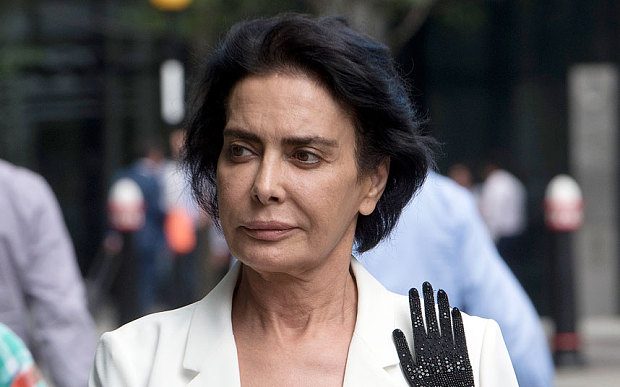 A film is being made that will claim to reveal the untold lives of Saudi Arabia’s royal family, focusing on the claims of a Palestinian woman who says she was a secret wife of the late King Fahd bin Abdulaziz al-Saud.

Janan Harb, 68, is a Palestinian-born Christian who says that after a forced conversion to Islam in 1968 as a 20-year-old, she married the 47-year-old “dashing and immensely powerful” Fahd, who was at the time Saudi Arabia’s crown prince and first in line to the throne.

But the royal family didn’t like Harb and in 1970 she was forced to flee Saudi Arabia at two hours’ notice after Fahd’s brother Salman, the current king, told him to get rid of her and her family.

Harb, who now lives in London and is a Scientologist, says that Fahd promised to look after her financially for life. But she accuses Fahd’s son Prince Abdulaziz bin Fahd of refusing to deliver on an agreement struck in 2003 when Fahd was ill, which was to give her £12m and two flats in London’s upmarket district of Chelsea.

Last November she won a landmark UK high court case and Abdulaziz was ordered to pay up, although the prince has until the end of March 2016 to decide whether to try and appeal the ruling.

In the interim, Harb has sold the rights to her extraordinary story to media relations consultant Damien McCrystal, who says funding has been secured in part to produce a film that will provide a unique insight into the inner workings of Saudi Arabia’s famously secretive royal family.

McCrystal told Middle East Eye that a two-minute trailer is currently being filmed in an undisclosed North African country. He said the clip will be published by the end of February in both English and Arabic.

The trailer will feature images of extraordinary claims including Fahd gambling at the Clermont Club casino in London; another showing him injecting himself with intravenous drugs to feed a claimed addiction to methadone; and another airing Harb’s allegation that Fahd forced her to have three abortions because he “didn’t want any little Arafats running about the palace,” in a reference to the late Palestinian leader Yasser Arafat.

Harb says she doesn’t regret marrying Fahd and in fact describes him as a “gentleman” who she has to thank because “he allowed me to escape Saudi rather than killing me”.

However, she admits that if Fahd were alive he “would not be very happy” about the film being made.

“But it has to come out,” she said. “No one in the whole world knows exactly how they live inside their palaces.” she told Middle East Eye. “It is part of history.” Saudi Arabia is renowned for being a deeply conservative Muslim country, where alcohol and gambling are banned and women aren’t allowed to drive. Harb’s controversial claims will likely cause much debate in the kingdom, where Fahd was widely adored during his reign between 1982 and 2005.

The film is being made by British director Malcolm Walker of the London-based production company Itasca and McCrystal estimates that it will require a budget of between five and 15 million pounds.

Its working title is “The Weaknesses of King Fahd” and beyond making salacious claims about Fahd’s personal life, it will also prominently feature the current King of Saudi Arabia Salman bin Abdulaziz al-Saud.

Harb says she knew Salman back when she lived in the palace with Fahd, but she doesn’t speak highly of him.

“He is not one of the nice people. I called him the ‘Butcher of Riyadh’ because of how he executed so many people,” she said, in a reference to Salman’s governorship of Saudi capital Riyadh.

“He didn’t have a good reputation, he was very aggressive. He was the one behind me being told to leave. But, he was a very handsome man – handsome and a dictator!” Harb has a broad disdain for the Saudi royal family, although much of her dislike is reserved for her late husband’s son Prince Abdulaziz bin Fahd, who she defeated in the compensation case in November 2015.

Harb described Abdulaziz as having “no shame” and said: “He is ungrateful. Fahd was such a nice man but he went cuckoo when he had that boy.”

Abdulaziz, 43, was revealed by a New York court in 2012 to have a $1bn property portfolio and he is also known to own several super-yachts.

The prince’s wealth comes from him being one of Fahd’s favourite sons, and as part of this legacy he receives 50 percent of the profits from Saudi media company the Middle East Broadcasting Corporation.

Harb claims that Abdulaziz travels the world with an entourage of at least 100 people and spends at least $6m a week on his lifestyle.

The prince has hit the headlines in the past year after his convoy of 10 cars was robbed in Paris of $335,000. He has also been accused of drugging one of his cousins in Switzerland.

His highflying controversial lifestyle has caused much anger among his fellow royals in Riyadh, according to Harb.

“He is shunned by the family,” Harb said. “The family is very happy I took him to court because they don’t like him. He’s not allowed to go to Saudi Arabia now.”

Harb’s autobiography, telling the full story of her life as Fahd’s secret wife, is planned to be published by the end of 2016. No date has been set for when the film will be completed.

In Saudi Arabia it is fair to say Harb’s story is given short-shrift.

When contacted by Middle East Eye for comment prominent journalist Jamal Khashoggi, a former advisor to the royal family, said: “I prefer to stay away from such gossip stories.”

Despite her controversial claims, Harb doesn’t fear any retribution from Saudi Arabia.

“I am Palestinian, I don’t get frightened,” she said.