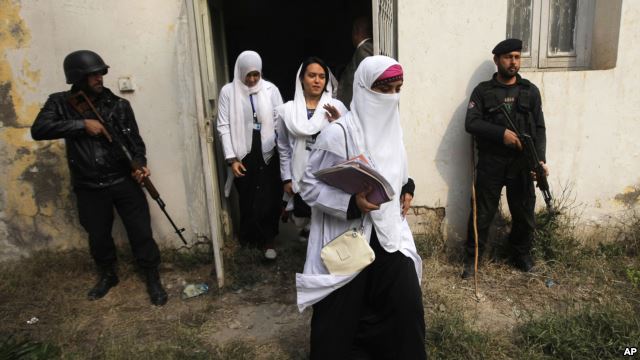 Pakistan’s civilian intelligence agency is warning the Islamic State terrorist group is an emerging threat in the country and hundreds of fighters linked to local banned religious groups have left for Syria in recent days to join IS ranks there.

In testimony before the Pakistan Senate Committee on Interior Affairs, Director General Intelligence Bureau Aftab Sultan revealed media groups and educational institutions in Pakistan are under threat from extremists linked to Daesh (the Arabic acronym for Islamic State, which the group considers derogatory).

It was the strongest admission by a high-ranking government official of an IS footprint in Pakistan.

Sultan said local Sunni-based Islamist organizations such as the banned Lashkar-e-Jhangvi and Sipah-e-Sahaba, which are blamed for deadly attacks against the country’s minority Shiite Muslims, “have a soft corner for Daesh.”

The spy chief alleged the group has established its headquarters in neighboring Afghanistan and is receiving cooperation from Tehreek-e-Taliban Pakistan, commonly known as the Pakistani Taliban, in planning terrorist attacks.

IS is also recruiting Pakistanis to join its forces in Syria, Sultan said.

“There are reports of fighters being recruited by sectarian and other outfits and being sent to Syria,” Sultan said, according to Pakistan’s Express Tribune. “The number of people leaving from Pakistan to Syria to join IS are in hundreds.”

IS is luring prospective recruits through social media, Sultan continued said, adding that IS uses the Internet to communicate with militants.

Islamabad has vowed “not to even tolerate the shadow of Daesh” in the country.  Officials cite recent successful raids in parts of Pakistan, particularly in the most populous Punjab province that have detained dozens of suspect IS fighters along with IS propaganda material.

But many prominent Pakistani politicians are concerned about a growing IS presence in the country.

“It [IS] is a danger not only to Pakistan but to the entire world,” Rahman Malik, former interior minister and chair of the  committee that held the hearing, told VOA.

“I think Pakistan and Afghanistan will suffer a lot in the future. China may also suffer,” Malik said. He added that a task force should be created to counter the growing IS influence in Pakistan otherwise, “the growing epidemic of terror will be extremely dangerous to Pakistan,” he said.

Pakistani analysts say if IS is not countered, it will create serious challenges to the country.

“Forces like these already exist in Pakistan,” Islamabad-based security analyst Sayed Nazir told VOA. “There are groups which provide shelters for them and support their ideology and help recruit for them.” He added that the government should not be hesitant in taking firmer measures against the banned outfits.

Peshawar University international relations professor Ijaz Khan told VOA: “They [IS affiliates] are two steps ahead of al-Qaida. They [government/security] had turn a blind eye to them…let’s see what they [government] are going to do about this issue.”

Afghan and U.S. military commanders believe Islamic State fighters have seized areas in eastern Nangarhar province, which borders Pakistan, and have been attempting to expand their influence on both sides of the long porous border.

They also believe that mostly militants formerly linked to the Afghan Taliban and the Pakistani Taliban are occupying Daesh ranks.  IS has identified Afghanistan, Pakistan and parts of Iran as its “Khorasan” province and appointed a former Pakistani Taliban commander as its head in the region.

In recent weeks U.S. drones and the Afghan air force have repeatedly attacked suspected IS hideouts, particularly in and around Nangarhar’s remote Achin district, killing scores of militants linked to the group.

IS announced the formation of its Khorasan branch in South Asia January 2015.

“Despite quick early growth in 2015, ISIL’s Khorasan branch will probably remain a low-level threat to Afghan stability as well as to U.S. and Western interests in the region in 2016,” U.S. National Intelligence Director James Clapper said Tuesday in testimony before the U.S. Senate Armed Services Committee.