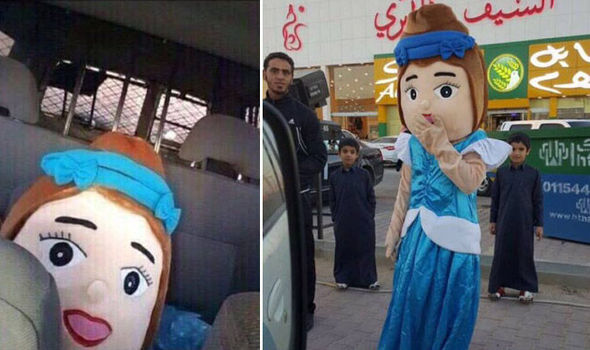 The female figure, whose hair was on display, was promoting the opening of a new sweet shop in Riyadh.The doll was dressed in a floor length blue and white dress and was wearing a headband.

The arrest was made because the man inside the costume was making inappropriate gestures to his male mascot companion, according to local reports.

The Saudi capital’s religious police said in a statement a number of complaints had been made about the two mascots making crude gestures in front of the shop.The statement said the police had “reminded them about Allah” and that “pretending to be women” is “against Sharia”.

Officers made the man inside the female doll and his supervisor write a statement promising the incident would not happen again. Men in the mascot costumes were reportedly makes rude gestures

In Saudi Arabia even dolls have to wear abaya

The statement said: “They expressed remorse and [we] asked them to accompany us to the station to complete the formalities.”The bizarre incident has sparked a backlash on social media, with thousands of Twitter users posting under the hashtag #Vice_Police_Arrest_a_Mascot.

One Twitter user wrote: “In Saudi Arabia even dolls have to wear abaya (Islamic dress)”.

Another wrote: “We never fail to prove to the world how pathetic we handle issues. Way to go.” A statement issued by religious police

The conservative Saudi kingdom, which enforces a strict dress code for women, has long been criticised for its lack of women’s rights.Women have to wear the hijab and a full black cloak called an abaya when in public.
In 2002 15 schoolgirls died in a fire after religious police refused to let them out of the burning public school because they were not “properly” covered.Officials denied charges of locking the school gates, but witness accounts led to a rare public criticism of the public body.

Women were given the right to vote in municipal elections for the first time last year but are still banned from driving and must be accompanied by a chaperone in public. Saudi women were recently banned from a Starbucks coffee shop after a wall used to separate males and females collapsed.A sign was put at the front of the shop in the Saudi capital telling women they were not allowed in and they should send their driver to order for them.