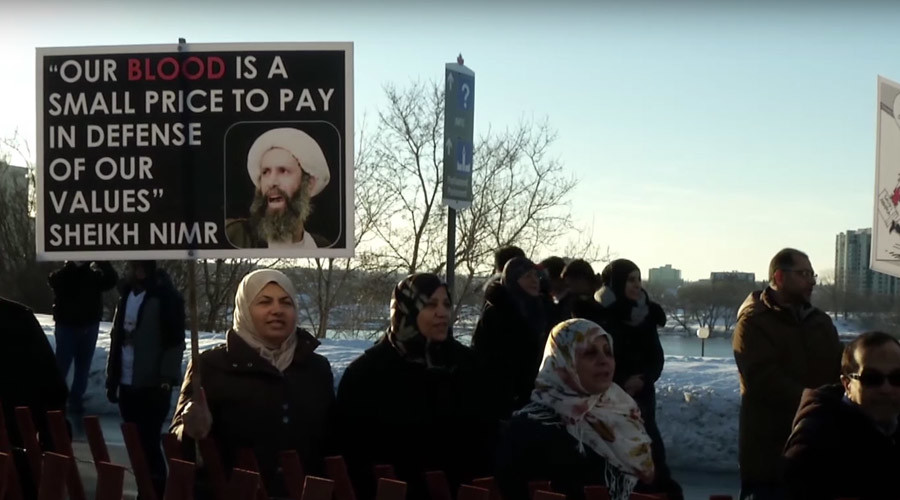 Editor’s note: We are sharing two insightful articles from the Boston Globe and RT. They point to the undisputable fact that it is high time for Western countries to focus on developing indigenous energy, continue to grow clean energy.

International norms are being violated by making arms deals with Saudi Arabia who is using these arms to suppress their own population as well as carpet bombing Yemenis. Enabling Saudi Arabia for Genocide by Nato is inexcusable and needs to stop

Hundreds of protesters have taken to the streets of the Canadian capital demanding that the government cancel a multibillion arms deal with Saudi Arabia in the wake of the execution of 47 prisoners, including a Shia religious leader.
Up to 500 people gathered at the Saudi embassy in Ottawa, Ontario, on Wednesday, outraged by the execution of 47 prisoners convicted on terrorism charges, including influential Shiite cleric Sheikh Nimr al-Nimr. The protesters were calling on Canadian Prime minister Justin Trudeau to cancel the CAD$15 billion ($10.5bn) arms deal with Saudi Arabia and thus demonstrate discontent with the clamant human rights abuses, even though the move would harm Canada’s economic interests.
https://www.rt.com/…/328211-protests-canada-saudi…/

For decades, US officials have refrained from criticizing Saudi Arabia, because of its government’s pro-American stance and US dependence on the country’s oil, even as they demonized Iran instead for religious extremism, oppression of women, and disregard for human rights.

But as the United States becomes less dependent on Saudi oil — and as oil itself recedes in importance — Saudi Arabia will come under increasing pressure to change its ways.