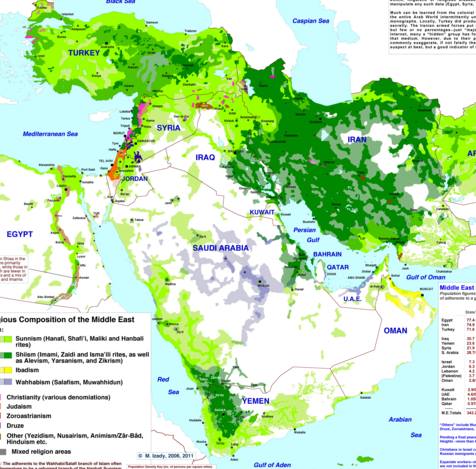 There are about three Shiites for every five Sunnis in the Middle East, i.e., 60% Sunnis and 40% Shias. Most of the Shiites are in Iran, but they are also the majority in countries like Azerbaijan, Bahrain and Iraq, and are a significant political and military force in Lebanon, Syria, Turkey and Yemen. In Turkey, a quarter of the country’s population is estimated to comprise Alevis and other Shias. In Yemen, they are dominant in North and West.

Saudi rulers adheres to Wahhabism, an ultraconservative subset of Sunni Islam. Wahhabism is a tiny part of Sunni Islam and is reject as extremist and intolerant by majority Sunni sub-sects such as Hanafis, Maliki and Shafii.

Wahhabism is practiced by a quarter of Saudi Arabia’s population. The majority of Saudis practice the more common form of Sunni Islam (i.e., Hanafi, Maliki, Sufi etc). Shia Muslims are a significant minority of the country, making up about one quarter of residents.