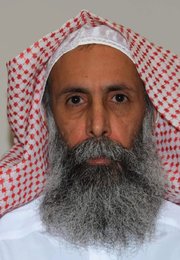 WHEN Saudi Arabia executed the Shiite cleric and political dissident Sheikh Nimr al-Nimr on Saturday, the country’s leaders were aware that doing so would upset their longtime rivals in Iran. In fact, the royal court in Riyadh was probably counting on it. It got what it wanted. The deterioration of relations has been precipitous: Protesters in Tehran sacked Saudi Arabia’s embassy; in retaliation, Saudi Arabia severed diplomatic ties. More severe fallout could follow — possibly even war.

Why did Saudi Arabia want this now? Because the kingdom is under pressure: Oil prices, on which the economy depends almost entirely, are plummeting; a thaw in Iranian-American relations threatens to diminish Riyadh’s special place in regional politics; the Saudi military is failing in its war in Yemen.

In this context, a row with Iran is not a problem so much as an opportunity. The royals in Riyadh most likely believe that it will allow them to stop dissent at home, shore up support among the Sunni majority and bring regional allies to their side. In the short term, they may be right. But eventually, stoking sectarianism will only empower extremists and further destabilize an already explosive region.

Over the past decade, Saudi rulers have turned to Iran and Shiites every time they needed an easy scapegoat. Anti-Iranian and anti-Shiite sentiments have long existed among religious extremists in the kingdom, but today they are at the heart of Saudi Arabia’s national identity. This development is dangerous for Saudi Arabia’s Shiite community, estimated at 10 to 15 percent of the population, and for the entire Middle East.

This is hardly the first time Saudi Arabia’s Shiites have come under fire. Sectarianism under Saudi rule dates back to the early 20th century. But until recently, the kingdom’s leaders have balanced strong-armed tactics with efforts to accommodate community leaders, seeking to minimize the dangers of sectarianism.

After the 2003 invasion of Iraq unleashed a new wave of Sunni-Shiite tension across the Middle East, Riyadh started to shift course. But in 2011, as the Arab world exploded in popular protests, the Saudi government cemented its commitment to sectarian confrontation. The Shiite majority population in neighboring Bahrain rose up against the Sunni-dominated monarchy. The Shiite minority in Saudi Arabia also took to the streets, protesting for political reform.

Invoking Iran and Shiites as a terrifying menace, Saudi rulers framed everything from domestic protests to intervention in Yemen in sectarian terms and in the process sought not only to demonize a minority group, but also to undermine the appeal of political reform and protest.

Sheikh Nimr had a long history of challenging the Saudi ruling family, but it was his post-2011 activism that led to his execution. After speaking defiantly about anti-Shiite discrimination, he was chased and arrested by Saudi police in July 2012. The police who apprehended him claimed that he had fired on them. Officially, Sheikh Nimr was executed for sedition and other charges. More likely, he was executed for being critical of power. He was not a liberal, but he gave voice to the kinds of criticisms the Saudi royals fear most and tolerate least.

Still, Sheikh Nimr’s execution was more important for what it communicated to the kingdom’s domestic allies and to potential future dissidents. The emergence of anti-Shiite sentiment over the past decade has not only been used to stamp out efforts by the Shiite minority to gain more political rights. In quashing calls for democracy originating from the Shiite community, Riyadh has also undermined broader demands for political reform by casting protesters as un-Islamic. Many Sunni reformers who cooperated with Shiites in the past have since stopped.

The Saudi authorities have good reason to be concerned about new calls for reform. About a week before Sheikh Nimr’s execution, the kingdom announced that it was facing an almost $100 billion deficit for its 2016 national budget. Declining oil revenues may soon force the kingdom to slash spending on social welfare programs, subsidized water, gasoline and jobs — the very social contract that informally binds ruler and ruled in Saudi Arabia. The killing of a prominent member of a loathed religious minority deflects attention from impending economic pressure.

The danger in Saudi Arabia’s ongoing sectarian and anti-Iranian incitement — of which Sheikh Nimr’s execution is just one part — is that it is uncontrollable. As is clear in Syria, Iraq and even further afield, sectarian hostility has taken on a life beyond what the kingdom’s architects are able to manage. This has already proved to be the case in Saudi Arabia, where terrorists aligned with the Islamic State have carried out several suicide bombings on Shiite mosques in the past year.

The real problem is not just that Saudis are willing to live with violent sectarianism. They are now beholden to it, too. That the kingdom’s leaders have embraced sectarianism so recklessly suggests that they have little other choice. This should be frightening, considering more is likely to be in store. But it should also be clarifying for those who believe that Saudi Arabia is a force for stability in the Middle East. It is not.