Home  »  Original Articles   »   Sheikh Nimr, A Man with Courage, who spat on the faces of Al Saud and left this world with pride and honour – Aamir Hussaini 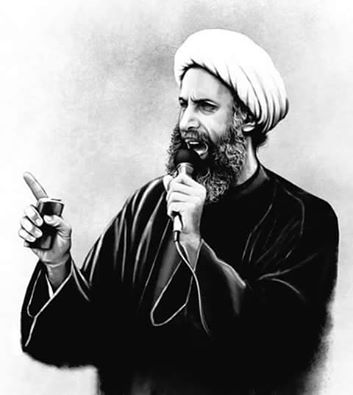 There is near about complete silence on execution of Sheikh Nimr Baqir Al-Nimr Asa in camp of prominent big voices of human rights activists , liberal journalists including Asama Jahangir , Najam Sethi , Beena Sarwar and others .I have seen their statements on Saudi bloggers , on arrests of human right activists in Saudi Arabia or Iran and their condemnation but now they are silent on death of Nimr despite world wide protests and many western human right activists , bloggers either from liberal camp or left circles are condemning this brutal act of Saudi Arabia.

Some Pakistani Liberal circles are following same line of pro-Saudi Mullahs and Takfiri lobbies in Pakistan and they are calling Sheikh Baqir Al-Nimr as proxy Mullah of Iranian regime . In Pakistan ” Question of People of eastern province of Saudi Arabia is being distorted by pro Saudi lobby and projecting as result of Iranian intervention not as People’s struggle for rights and liberation as we have seen in case of Bahrain .

I have clarified some fallacies about eastern province of Saudi Arabia and Sheikh Baqir Al-Nimr .I am Socialist and support socialist Saudi Arabia not in favour of Iranian style model of state but i do not consider Sheikh Nimr Baqir Al-Nimr a proxy of Iran or Iranian agent or his struggle a struggle of fundamentalist , fanatic and Takfiri Mullah .In my thought he was semi-Utopian Islamic socialist leader of people of Eastern province of Saudi Arabia although he never called himself a Socialist in his life .

It is injustice to call him a terrorist , sectarian or Takfiri Mullah. I do not include him in line of sectarian , fundamentalist , religious fanatic Mullahs , he was not . He did not excludes Sunnis from ranks of Muslims and Islam and he never supported even fully Iranian model of state for people of Saudi Arabia . He was very honest leader who always supported demand of Kurd people for independent Kurd state consisting of all Kurd areas which are at this time part of three Muslim countries Iraq , Iran and Turkey , this support is unique feature of his life which we do not see in other Shi’ite political clergy of Iraq , Iran , Lebanon , Syria even in Bahrain .

So silence on his murder by Saudis is not justice but a crime while taking refuge either in Shia-Sunni Binary or Saudi-Iranian proxy theories and labeling Baqir as Iranian agent or Iranian proxy . All socialist , progressives should stand with peoples of Eastern province and support their movement for democracy , rights , equality and independence and condemn Saudis on their brutality , injustice and cruelty .

To condemn this murder and execution of Sheikh Baqir is not sectarianism , not Shia-ism , not support to Khuamini-ism , not to take side of Iranian camp , not to fall in Iranian camp but is to stand with Justice , equality and all human values .You can see in his speeches love for human values , freedom , respect for humanity , wretched of earth .He was non-violent and do not support violent ways of politics . He was following like Gandhian path in politics . In his people he gave sermons for humanity and non violence .

He showed path anger youth and saved them from falling in terrorism and violence . I think various pro Iranian Shi’ite people in Pakistan admiring him are also unaware of this non violent aspect of his life and they did not know his Gandhian way of politics .They should read his views thoroughly on Question of State , Political system , Patriotism and love for his land . He was nationalist in some sense .Please read transcribed speech of Baqir which i have translated in Urdu and given in last of my article . Sectarianism , Takfiri mentality and pro-Saudi camp even some circles in pro-Iranian camp in Pakistan are great hurdles in understanding of Resistance Movements in Saudi Arabia , Bahrain , other Gulf states , in Iran , even in Lebanon .