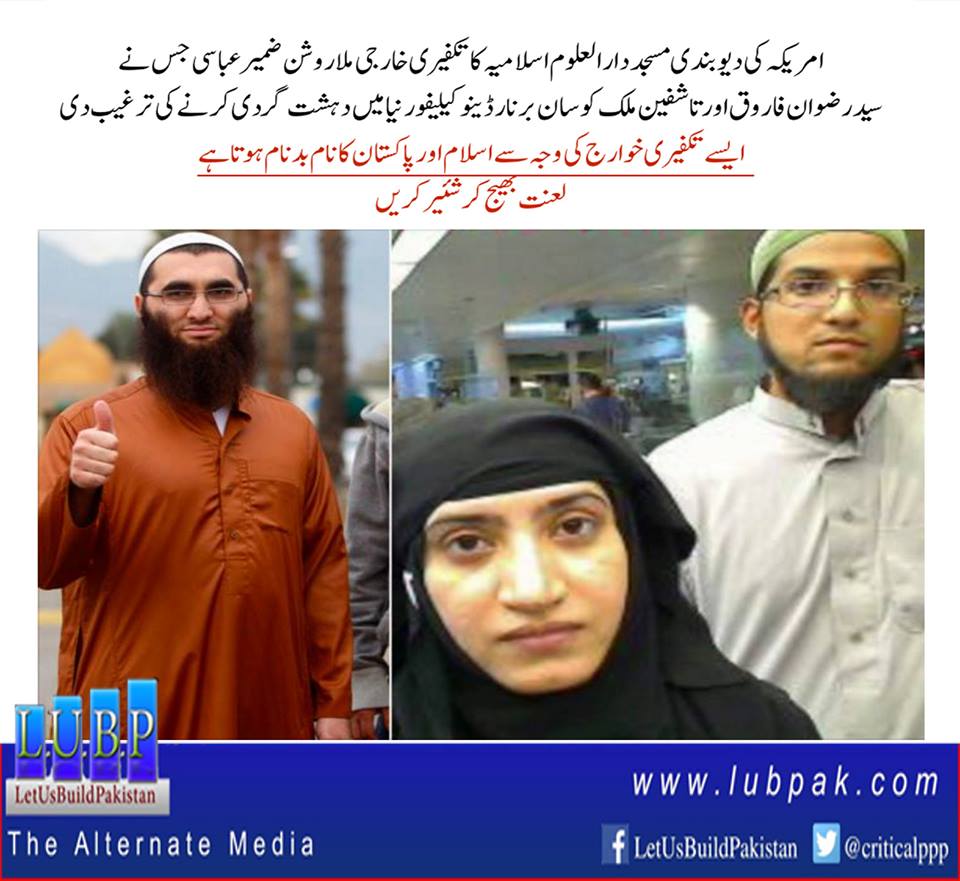 The cleric acting as spokesman for the San Bernardino mosque where terrorist Syed Rizwan Farook worshipped claims he barely knew Farook and didn’t know his terrorist wife at all. But phone records and other evidence uncovered by federal investigators cast doubt on his story.

The FBI has questioned the cleric, Roshan Zamir Abbassi, about his phone communications with Farook — including a flurry of at least 38 messages over a two-week span in June, coinciding with the deadly Muslim terrorist attack on two military sites in Chattanooga, Tenn.

Abbassi, a Pakistani, insists he had nothing to do with the shooting at a San Bernardino County government building five miles from the mosque. While he confirms the text messages with Farook, he claims they were merely discussing food donations for his Dar-al-Uloom al-Islamiya of America mosque.

Abbassi maintained at a press conference that he didn’t know Farook any better than he knew the reporters in the room. But members of the mosque say Farook was a fixture there. He had been coming to pray and study at least three times a week for two years. In fact, he memorized the Koran there, something you cannot do without learning Arabic, a subject Abbassi teaches.

His other assertion that he never even saw Farook’s wife, Tashfeen Malik, also strains credulity. Malik joined her husband in shooting 35 of his government co-workers at a Christmas party.

“No one knows anything about his wife,” assistant imam Mahmood Nadvi agreed. “She never came to prayer.”

But longtime mosque member Gasser Shehata, who claimed to have prayed “shoulder to shoulder” with Farook, said Dar-al-Uloom prepared a chicken-and-rice dinner to celebrate the couple’s wedding last year. Reportedly, hundreds of congregants attended the walima reception, including the mosque leadership.

Asked if Farook was radicalized at the mosque, Abbassi snapped, “Never.” He said the mosque teaches only peace, insisting no one has even an “extremist idea.”

“In Islam,” he said, “we are against innocent killing.”

Abbassi recently posted a message on Facebook condemning the United States and other Western nations for their Mideast policies, arguing they are equally guilty of violence to achieve political and religious goals. His mosque’s Web page features a video claiming that the San Bernardino shooting was carried out by the US government in a “false flag conspiracy,” and that Farook and Malik were “patsies” assassinated “by government-sponsored perpetrators.”

Another person of interest is Abbassi’s brother, Mohammad Sabir Abbassi, a Muslim activist who serves as a trustee and English teacher at the San Diego mosque once headed by the late al Qaeda cleric Anwar al-Awlaki.

FBI Agent Joel Anderson said in court filings that Farook indicated he was a big fan of Awlaki and listened to a series of sermons about jihad and martyrdom called “The Hereafter.”

In his filing, Anderson says Farook studied the ultra-orthodox Islamic sect Tablighi Jamaat. US officials say the cult, with 50,000 members, is rife with jihadists, and jihadi groomers are recruiting at mosques in at least 10 states.

“We have significant presence of Tablighi Jamaat in the United States,” said Assistant FBI Director Michael Heimbach, “and we have found that al Qaeda used them for recruiting.”

Homeland Security Department veteran Philip Haney said Dar-al-Uloom was among the mosques his agency was investigating as part of a probe of the Tablighi movement.

“Individuals who were already in the case in 2012 went to that mosque,” Haney claimed in a Fox News interview.

He said he ID’d some 300 jihadists and terrorists tied to the movement in the United States before the Obama regime pulled the plug on the investigation in 2012. Known Tablighi alumni include the Lackwanna Six, the American Taliban John Walker Lindh, shoe bomber Richard Reid, dirty bomber José Padilla and would-be Brooklyn Bridge bomber Iyman Faris.

“We have nothing to hide,” Roshan Abbassi asserted.

Investigators shouldn’t take his word for it.