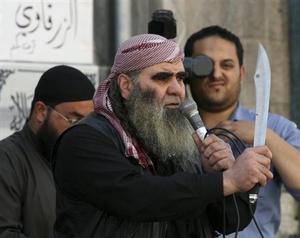 Editors’s Note: While the author is talking about Salafis, the same hate teachings have been used by Deobandis in South Asia. A substantial number of ISIS fighters are recruited at Deobandi Madrassas in South Asia. Other terms like Takfiri Khawarj are also used for the militant literalist mindset.

THIS spring, I traveled to the cradle of the Arab uprisings — a forlorn street corner in Sidi Bouzid, Tunisia, where a street vendor, drenched in paint thinner, struck a match in December 2010 that ignited the entire Middle East. “We have far more freedoms,” one peddler hawking fruit in the same square lamented, “but far fewer jobs.” Another noted that Mohamed Bouazizi, the vendor who set himself on fire, did so not to vote in a democratic election but because harassment by local officials had cost him his livelihood.
Continue reading the main story
Related Coverage

A gunman who said he was a member of a jihadist group near the Bab al-Hawa border crossing in Syria. The signs read “The solution is Islam,” left, and “There is no god but God.”
As Syrian War Drags On, Jihad Gains FootholdJULY 29, 2012

As the peddlers vented, prayers ended at the whitewashed mosque across the street. Among the faithful were Salafis, ultraconservative Sunni Muslims vying to define the new order according to seventh-century religious traditions rather than earthly realities. For years, many Salafis — “salaf” means predecessors — had avoided politics and embraced autocrats as long as they were Muslims. But over the past eight months, clusters of worshipers across the Middle East have morphed into powerful Salafi movements that are tapping into the disillusionment and disorder of transitions.

A new Salafi Crescent, radiating from the Persian Gulf sheikdoms into the Levant and North Africa, is one of the most underappreciated and disturbing byproducts of the Arab revolts. In varying degrees, these populist puritans are moving into the political space once occupied by jihadi militants, who are now less in vogue. Both are fundamentalists who favor a new order modeled on early Islam. Salafis are not necessarily fighters, however. Many disavow violence.
Continue reading the main story
Related in Opinion

In Tunisia, Salafis started the Reform Front party in May and led protests, including in Sidi Bouzid. This summer, they’ve repeatedly attacked symbols of the new freedom of speech, ransacking an art gallery and blocking Sufi musicians and political comedians from performing. In Egypt, Salafis emerged last year from obscurity, hastily formed parties, and in January won 25 percent of the seats in parliament — second only to the 84-year-old Muslim Brotherhood. Salafis are a growing influence in Syria’s rebellion. And they have parties or factions in Algeria, Bahrain, Kuwait, Libya, Yemen and among Palestinians.

Salafis are only one slice of a rapidly evolving Islamist spectrum. The variety of Islamists in the early 21st century recalls socialism’s many shades in the 20th. Now, as then, some Islamists are more hazardous to Western interests and values than others. The Salafis are most averse to minority and women’s rights.

A common denominator among disparate Salafi groups is inspiration and support from Wahhabis, a puritanical strain of Sunni Islam from Saudi Arabia. Not all Saudis are Wahhabis. Not all Salafis are Wahhabis, either. But Wahhabis are basically all Salafis. And many Arabs, particularly outside the sparsely populated Gulf, suspect that Wahhabis are trying to seize the future by aiding and abetting the region’s newly politicized Salafis — as they did 30 years ago by funding the South Asian madrassas that produced Afghanistan’s Taliban.

Salafis go much further in restricting political and personal life than the larger and more modern Islamist parties that have won electoral pluralities in Egypt, Tunisia and Morocco since October. For most Arabs, the rallying cry is justice, both economic and political. For Salafis, it is also about a virtue that is inflexible and enforceable.

“You have two choices: heaven or hellfire,” Sheikh Muhammad el-Kurdi instructed me after his election to Egypt’s parliament as a member of Al Nour, a Salafi party. It favors gender segregation in schools and offices, he told me, so that men can concentrate. “It’s O.K. for you to be in the room,” he explained. “You are our guest, and we know why you’re here. But you are one woman and we are three men — and we all want to marry you.” Marriage may have been a euphemism.

Other more modern Islamists fear the Salafi factor. “The Salafis try to push us,” said Rachid al-Ghannouchi, founder of Ennahda, the ruling Islamist party in Tunisia. The two Islamist groups there are now rivals. “Salafis are against drafting a constitution. They think it is the Koran,” grumbled Merhézia Labidi, the vice chairwoman of Tunisia’s Constituent Assembly and a member of Ennahda.

Salafis are deepening the divide between Sunni and Shiite Muslims and challenging the “Shiite Crescent,” a term coined by Jordan’s King Abdullah in 2004, during the Iraq war, to describe an arc of influence from Shiite-dominated Iran to its allies in Iraq, Syria and Lebanon. Today, these rival crescents risk turning countries in transition into battlefields over the region’s future.

The Salafis represent a painful long-term conundrum for the West. Their goals are the most anti-Western of any Islamist parties. They are trying to push both secularists and other Islamists into the not-always-virtuous past.

American policy recently had its own awakening after 60 years of support for autocratic rulers. The United States opted to embrace people power and electoral change in Tunisia, Egypt, Libya, Morocco and Yemen. Yet Washington still embraces authoritarian Gulf monarchies like Saudi Arabia, tolerating their vague promises of reform and even pledging the United States’ might to protect them.

Foreign policy should be nuanced, whether because of oil needs or to counter threats from Iran. But there is something dreadfully wrong with tying America’s future position in the region to the birthplace and bastion of Salafism and its warped vision of a new order.