Bookstore owner Abul Shukoor and manager Mazhar Ahmad were arrested Wednesday, Dec. 2 from Ahmadiyya Book Depot in Rabwah. Both men were taken to an unknown location after their arrest.
According to a leaked charge sheet the men were charged under section 298-C of Pakistan’s Penal code. The infamous law prevents members of Ahmadiyya sect from preaching and calling themselves Muslim.

In a surprising turn of events, the two men have also been charged under Pakistan’s Anti Terrorism Act (ATA) of 1997 for the crime of selling books published by the minority Ahmadiyya community. The men have been booked under Provision 8 of ATA which carries a prison sentence of up to seven years and under section 298-C they can face an additional three years in jail.

This is not the first time Shukoor has been targeted by the authorities, Earlier this year in January Shukoor was harassed and has his store vandalized by local police. In 1974, Shakoor’s opticial shop in Sargodha, Punjab was ransacked and looted along with his house. In 1985 he was charged with blasphemy under article 298c for claiming his Ahmadi belief. In 1990 he was given a three year prison sentence after a local Khatme Nabuwwat cleric filed a complaint against him for wearing a ring with a Quranic inscription. 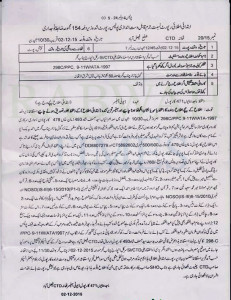 This has come as a shock to the local Ahmadiyya Muslim Community who are often times victims of terror attacks. The provision 8 of the anti-terrorism act was designed to stop sectarian hatred against minorities like the Ahmadiyya but is being increasingly used by extremist clerics to target members of the Ahmadiyya sect.

In 1974, Pakistan declared the Ahmadiyya sect to be non-Muslim through a constitutional amendment, since then the Ahmadis have faced severe persecution both by the state and by local extremist groups like Khatm-e-Nabuwat.