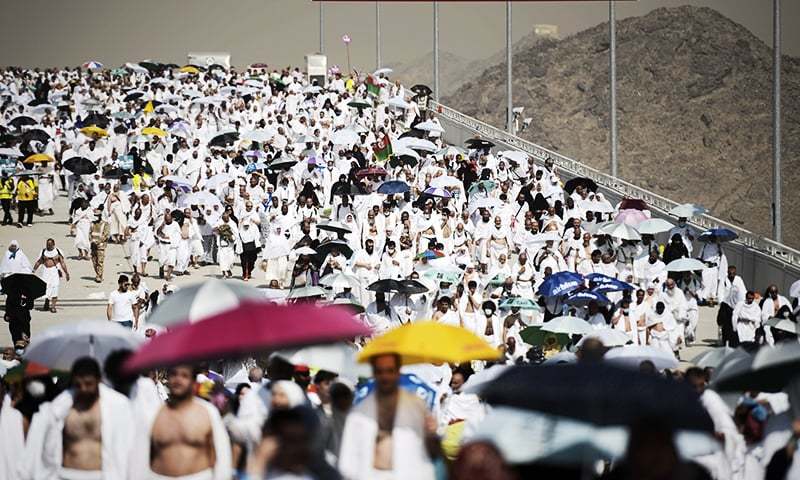 KARACHI: It was for the second time that Uzma Haq and her husband, Naveed Ahmed Usmani, survived a tragedy. The first time was the crane crash incident at the Grand Mosque and this time a stampede at Mina, five kilometres outside Makkah.

Speaking to Dawn over the phone from his hotel in Makkah, Mr Usmani, a resident of Shadman Town in Sakhi Hassan, said they had already performed the ritual of stone throwing early in the morning. “We reached Mina at around 7.30am, and it was already packed,” he said, while behind him a cacophony of voices and ringing of phones could be heard. “By the time we were ready to leave — after finishing our prayers between Mina, Arafat, Muzdalifa, Rami and Fajaar — there was no space to stand in the scorching heat. So, we quickly left for our hotel in Makkah,” he said.

As soon as the couple reached the hotel, they received phone calls and messages on their mobile phones. The first call was from their uncle Abdul Hayee from North Nazimabad, asking them if they were fine. Abdul Hayee, 57, was flicking through channels when a news story about a stampede in Mina caught his attention.

He frantically started dialling their phone, as the death toll increased from a hundred to two hundred within an hour. Speaking to Dawn, he said: “We often don’t keep a record of emergency numbers, though we should. In this case, we had asked them both to keep us informed about their whereabouts as this is the second accident that has happened within a month.”

On the other end, Naveed Usmani was counting his lucky stars. “We were in a group of 23 Pakistanis who reached Mina early. I was quite taken aback to know the death toll after the stampede. And it probably happened at the ground floor near Maktab 93 because usually people don’t wait; rather they push their way to get to the front, which causes people to get lost or, in extreme cases, stampedes occur. It also says a lot about the arrangements this time around.”

In other cases, as mobile networks were constantly busy, families tracked one another through internet-based services, such as WhatsApp, Tango and Viber, to keep track of their loved ones lost in Mina.

Another Pakistani, Mohammad Niaz, a resident of the Garden area, was looking for a friend he had made at Mina the last time he went for Haj. Narrating his friend’s ordeal, Niaz said Yunus Sheikh, a prayer leader at a small mosque near Mina, was looking for his family who got lost during the stampede.

Speaking to Dawn over the phone, Yunus Sheikh, of Burmese descent, said his wife and two daughters were standing near the Jamarat when the stampede began. “The crowd kept growing and I kept calling out their names, while thinking of going towards the hospital. But finally my wife called out to me and I found them huddled in a corner. My wife was trying to keep people from stepping on them,” he narrated, adding that they kept holding hands and finally made it to the tunnel from where instead of staying back at their camp, they left for Makkah instantly.

Abdul Aziz, an official working at the Mina camp for emergency services, said: “Seven Pakistanis have been rescued so far. Our officers from the Pakistani embassy are still on site and nothing has been confirmed concerning how many Pakistanis have died in the stampede.”