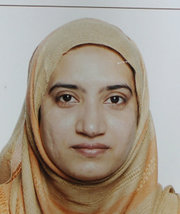 Editor’s Note: It is now a matter of public record that the moderate Sunni Barelvi relatives of Tashfeen Malik distanced themselves from the hardline Deobandi views espoused by her father. It is also a fact that Tashfeen and her father were radicalised during their stay in Saudi Arabia. Most importantly, it is also a matter of public record that Saudi Arabia, a central US ally in the region, is the largest donor to the Deobandi mosque network in Pakistan. Deobandi mosques and madrasses are the most significant recruiting grounds for extremists and are the nursery for terrorist groups like ASWJ-LeJ, Taliban, Jundullah, JeM and Jamaat ul Ahrar. Lastly, it is emerging that Tashfeen Malik was established connections with the most radical Deobandi mosque network in Pakistan; i.e., the notorious Lal Masjid (Red Mosque) Saudi Arabia invests primarily in Deobandi mosques due to their close historical and ideological affinity to Wahhabism – the official State variant of Islam that is strictly enforced in Saudi Arabia. Tashfeen’s initial radicalisation occurred in Saudi Arabia. Even if it was completed in Pakistan, it took place in Deobandi institutes that represent Saudi Arabia’s ideological Trojan Horse in not just Pakistan but South Asia as a whole. We appreciate that this article was clear in mentioning the specific Deobandi ideology of Tashfeen Malik – the same ideology that was also responsible for the APS school massacre. The extremist Deobandi mosque network in Pakistan unfortunately has the support of the PML N leadership as well as sections of the establishment. So to that extant there is responsibility. However, Saudi Arabia must not be allowed to dodge the fact that it is Terrorism Central due to its central role in sponsoring Wahhabi and Deobandi radicalisation across the globe.

CAIRO — As a tide of Islamist violence washed across Pakistan in recent years, Bahauddin Zakariya University in the southern city of Multan struggled to halt spreading intolerance, with mixed results. That university has come into the spotlight in recent days as one of the few known way points for Tashfeen Malik, the Pakistani-born woman who along with her husband, Syed Rizwan Farook, took up assault rifles and, the police say, killed 14 people last week in San Bernardino, Calif. Ms. Malik’s role in the decision to attack is of particular interest, in part because on the day of the assault she posted on Facebook that the couple was dedicating the massacre to the Islamic State. She and her husband were killed in a gun battle with the police after the attack. During Ms. Malik’s time as a pharmacy student at the Multan university, starting in 2007, as Taliban attacks shook Pakistan, the area around Multan and her nearby hometown gained notoriety as centers of radical sectarian activity. The authorities’ concern became so great that in the months after Ms. Malik left the university, officials there began helping Pakistani intelligence agencies monitor for extremist activity on campus.

The officials even installed surveillance cameras in the residence halls, out of concern that they had become recruiting grounds for radical groups. Teachers described Ms. Malik as a polite and driven student who was visibly devout, always wearing the niqab face covering and avoiding contact with male students. But that hardly made her unique in southern Pakistan, particularly after she had spent most of her life in Saudi Arabia, and the timing and circumstances of her shift into militancy remain a mystery to investigators. Still, in the turbulence of that moment, and in the broader generational tensions stemming from Pakistani families who, like Ms. Malik’s, go to Saudi Arabia for opportunity and return practicing a more conservative brand of Islam, there are clues to the cultural and religious way stations of her apparent transformation.

Culturally, Ms. Malik, 29, straddled several worlds, having been born in Pakistan, raised in Saudi Arabia and married in the United States. Her family, which comes from the remote Layyah District of Punjab Province, moved to Jidda, Saudi Arabia, in 1989, according to interviews with some of her relatives and former neighbors in the area. They say that her father, an engineer, left in anger, having fallen out with his brothers over a property dispute. From 2007 to at least 2012, Ms. Malik studied in Multan, the main city in southern Punjab, famed for its sparkling religious shrines that mark it as a historical center of Sufism, a mystical form of Islam.

Although Ms. Malik obtained her place under a quota system that reserves places for the children of expatriate Pakistanis, she quickly impressed professors with her diligence and ability. Some thought she might eventually become a lecturer. “We felt she could be an asset to the university if she joined the faculty after completing her studies,” Dr. Khalid Hussain Janbaz, a former lecturer, said in a phone interview.

No male lecturer knew what she looked like, however, because of the niqab. And though conservative Muslims were not unusual there, Ms. Malik developed a reputation as someone who purposefully avoided making friends with men and who was deeply rooted in her Saudi upbringing. After two years living at Maryam Hall, a hostel for female students, she complained to one faculty member that she was uncomfortable with the behavior of the other women.“She told me, ‘My parents live in Saudi Arabia, and I am not getting along with my roommates and cannot adjust with them, so can you help me?’ ” Dr. Syed Nisar Hussain Shah recalled. Soon after, Ms. Malik moved into a private house in the city that her parents rented for her. “I would call Tashfeen a Saudi girl,” Dr. Shah said. “She had just come to Pakistan for her degree.”

In many ways, Ms. Malik was a classic product of the conservatizing influence that Saudi Arabia has brought to bear on countries like Pakistan. Critics of Saudi influence usually focus on the funding of hard-line mosques and religious schools, a criticism echoed on Sunday by the German vice chancellor, Sigmar Gabriel, who connected the export of Saudi-style Islam to the danger from growing extremism in Europe. “We must make it clear to the Saudis that the time of looking the other way is over,” Mr. Gabriel said an interview with the newspaper Welt am Sonntag. But Ms. Malik’s family represents a different strand of the same phenomenon: changes wrought by Pakistanis who, since the 1970s, have migrated to Saudi Arabia for work, only to return with a far more conservative creed.

Relatives and neighbors said that, after some years in Saudi Arabia, Ms. Malik’s father, Gulzar, rejected the Barelvi school of Sunni Islam that his family had traditionally practiced, and turned to the stricter Deobandi school. He stopped returning home for weddings, and his children, including Ms. Malik, did not meet their Pakistani relatives.

“There was a lot of friction within the whole family as they adhered to different sects,” said Zahid Gishkori, a journalist based in Islamabad who is from the same district as the family. In recent interviews in the United States, some of Mr. Farook’s male relatives spoke of Ms. Malik’s conservative ways with suspicion, saying they had never seen her face and noting that she chose not to drive. Dr. Shah, of the university faculty, said he was shocked by the news that Ms. Malik was suspected of committing a mass killing.

He said he did not think she had become radicalized at the university, because it does not have a reputation for extremism. But neither Multan nor Ms. Malik’s university have been immune to extremist currents. A proliferation of hard-line religious schools across southern Punjab have obtained a reputation as incubators for sectarian and militant groups, some of which enjoy the tacit support of political leaders and elements of the Pakistani security forces. In response, the university kept a “very vigilant eye” on its students, said Dr. Janbaz, the lecturer, and coordinated with intelligence agencies to install surveillance cameras.

Ms. Malik, however, never came under scrutiny, he said. “We never heard anything suspicious about her activities,” he said. “She kept to herself and seemed to just focus on her studies.” But the authorities did little to stop a virtual witch hunt on campus that led to a nationally publicized death after Ms. Malik left the university. In 2013, Islamist students there accused Junaid Hafeez, a young lecturer in English who had traveled to the United States as a Fulbright scholar, of insulting the Prophet Muhammad in comments he made on his Facebook page. Mr. Hafeez was later charged with blasphemy, a crime that carries a possible death penalty in Pakistan, and he is currently in jail awaiting trial. Mr. Hafeez has struggled to find legal representation since two men fatally shot his lawyer, Rashid Rehman, in May 2014, in what was seen as punishment for daring to defend someone accused of blasphemy.

Pakistani security officials say there is no indication yet that Ms. Malik moved in extremist circles on campus or in the city. Yet they have sought to restrict reporting from the area in recent days, often by issuing quiet threats to Pakistani reporters to back off. The officials conducted a search of Ms. Malik’s former home in Multan on Saturday. On NBC’s “Meet the Press” on Sunday, Attorney General Loretta E. Lynch said that investigators from the United States were “working closely with our foreign counterparts,” including Pakistan, to gather more information about Ms. Malik and Mr. Farook. At a news conference in Islamabad on Sunday, Pakistan’s interior minister, Chaudhry Nisar Ali Khan, pledged to cooperate with the American investigation.

But Mr. Khan criticized some of the American news media’s coverage of the attack. “The wrongdoing of an individual Muslim or Pakistani does not mean the entire country or religion is at fault,” he said. Ms. Malik’s estranged relatives, however, have been vocal in expressing shame over her actions. “We are ashamed and shocked about this act done by our niece,” Malik Ahmed Ali Aulakh, a relative and a former provincial minister, told Agence France-Presse. “Why did she do something so gruesome? We can’t believe it.”