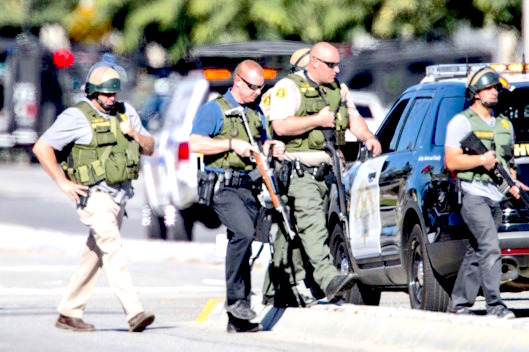 Almost all of these attacks are committed specifically by Wahhabis or their South Asian ideological equivalent, Deobandis. Wahhabis originally made up about only 15% of the total Muslim population, but thanks to Saudi petro funding, the Wahhabi ideology is increasing rapidly across the globe boasting of many new converts.

Phase 2: Organize, fund, and arm followers into militant groups like Boko Haram in Nigeria, ISIS in Iraq, Syria, Libya, or Al-Qaeda in Afghanistan and Pakistan.

All of these phases have manifested themselves today in the shooting attack at San Bernardino. Muzammil Siddiqi of the Council on American Islamic Relations, was very quick to issue a press conference to settle the public before any backlash occurs.

However, this is going to take more than just a few press conferences and condemnations. The US as a whole, both the Muslim community and Western institutions need to tackle the issue at its root. Saudi Wahhabi petro dollars and the US government’s protection of the Saudis cannot be stressed enough as the root cause of the world wide jihadist terror. They are corrupting ordinary Muslims everywhere to adopt more radical versions of Islam and even recruiting non-Muslims to convert to Wahhabism. There is a dangerous relationship between Western and Wahhabi institutions that is bonded by Saudi petro dollars.

Some Western governments have a track record of employing these radical Wahhabi Islamists against secular Arab leaders and moderate Muslim societies causing not only a massive refugee crisis but an increase in terror attacks across the globe.

How Zero Hedge reports on this incident:

“Farook traveled to Saudi Arabia earlier this year and returned with a wife,”AP reports, citing co-worker Patrick Baccari, who said Farook “was gone for about a month in the spring, and when he returned word got around [he’d] had been married.” His new wife was described as “a pharmacist.”

Now clearly there are no smoking guns there, but it’s worth noting that when it comes to radicalization, no one does it quite like the Saudis Source