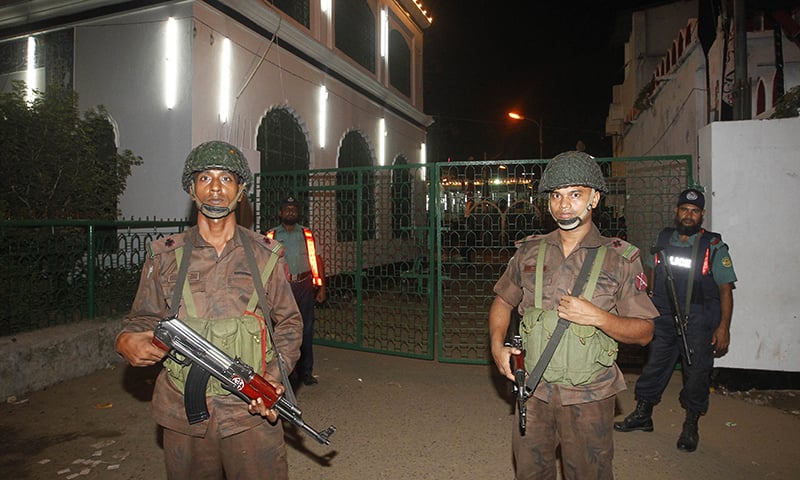 DHAKA: The militant Islamic State (IS) group has claimed responsibility for a deadly attack on worshippers at a Shia mosque in northern Bangladesh, the United States (US)-based monitoring organisation SITE said Friday.

The attackers entered the mosque in Shibganj, some 125 kilometres north of Dhaka, during evening prayers on Thursday and opened fire on the gathered worshippers before fleeing.

Police said the prayer caller had been killed and three worshippers wounded in the shooting, a rare attack on minority Shia Muslims in the mainly Sunni nation.

Detectives say they are questioning two people over the shooting although they had not been formally arrested.

“We have picked up two Sunni locals for interrogation in connection to the shootout,” Shibganj police chief Ahsan Habib told AFP.

The SITE Intelligence Group, which monitors militant activity, said on its website that the IS group had claimed responsibility in a message posted on Twitter.

Bangladeshi authorities have previously said there is no evidence that IS extremists are active in the country.

The group, however, has claimed a series of attacks in Bangladesh, including the shooting and wounding of an Italian priest and the killing of a Sufi Muslim shrine chief, both this month.

Security had been stepped up across the country after two top opposition leaders were hanged on Sunday following their conviction for war crimes committed during the 1971 independence conflict against Pakistan.

One of the men executed was Ali Ahsan Mohammad Mujahid, who was the official number two in the Jamaat-e-Islami party.

Salahuddin Quader Chowdhury, a senior figure in the main opposition Bangladesh Nationalist Party (BNP), was hanged at the same time at Dhaka’s Central Prison in the capital’s old quarter.

The attackers in Shibganj struck a day after police shot dead a top militant accused of hurling grenades at the country’s main imambargah in Dhaka last month, killing two people.

The bombing was believed to be the first attack on Shias in Bangladesh, though banned militant groups have killed more than a dozen Sufi Muslims and attacked Hindus and Christians in the last two years.

Speaking after the latest attack, local Shia leader Mir Zulfiqar Ali said that there was growing sense of fear among the community.

“We are now concerned as it was the second time an attack came on us. All we can do is to condemn such attacks and ask for extra security from the government at our mosques and shrines,” he told AFP.

Police have pledged to step up security in the wake of the attack.

“Security has been beefed up at all important Shia installations including their mosques in Dhaka ahead of the Muslim’s Friday prayer,” Dhaka police spokesman Muntashirul Islam told AFP.

Bangladesh has been roiled by violence for much of the last three years since a domestic tribunal began delivering its verdicts on opposition figures accused of orchestrating massacres during the 1971 war.