Home  »  Newspaper Articles   »   This is a Saudi textbook. (After the intolerance was removed) 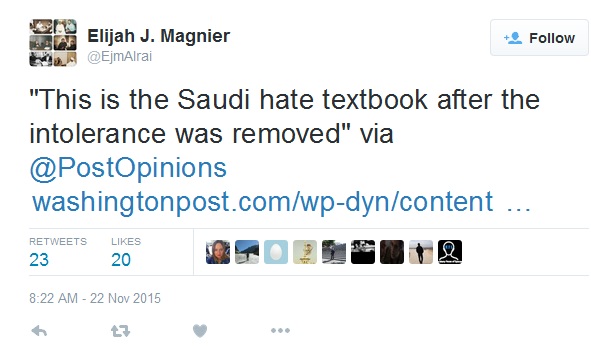 Saudi Arabia’s public schools have long been cited for demonizing the West as well as Christians, Jews and other “unbelievers.” But after the attacks of Sept. 11, 2001 — in which 15 of the 19 hijackers were Saudis — that was all supposed to change.

A 2004 Saudi royal study group recognized the need for reform after finding that the kingdom’s religious studies curriculum “encourages violence toward others, and misguides the pupils into believing that in order to safeguard their own religion, they must violently repress and even physically eliminate the ‘other.’ ” Since then, the Saudi government has claimed repeatedly that it has revised its educational texts.

Prince Turki al-Faisal, the Saudi ambassador to the United States, has worked aggressively to spread this message. “The kingdom has reviewed all of its education practices and materials, and has removed any element that is inconsistent with the needs of a modern education,” he said on a recent speaking tour to several U.S. cities. “Not only have we eliminated what might be perceived as intolerance from old textbooks that were in our system, we have implemented a comprehensive internal revision and modernization plan.” The Saudi government even took out a full-page ad in the New Republic last December to tout its success at “having modernized our school curricula to better prepare our children for the challenges of tomorrow.” A year ago, an embassy spokesman declared: “We have reviewed our educational curriculums. We have removed materials that are inciteful or intolerant towards people of other faiths.” The embassy is also distributing a 74-page review on curriculum reform to show that the textbooks have been moderated.

The problem is: These claims are not true.

A review of a sample of official Saudi textbooks for Islamic studies used during the current academic year reveals that, despite the Saudi government’s statements to the contrary, an ideology of hatred toward Christians and Jews and Muslims who do not follow Wahhabi doctrine remains in this area of the public school system. The texts teach a dualistic vision, dividing the world into true believers of Islam (the “monotheists”) and unbelievers (the “polytheists” and “infidels”).

This indoctrination begins in a first-grade text and is reinforced and expanded each year, culminating in a 12th-grade text instructing students that their religious obligation includes waging jihad against the infidel to “spread the faith.”

Freedom House knows this because Ali al-Ahmed, a Saudi dissident who runs the Washington-based Institute for Gulf Affairs , gave us a dozen of the current, purportedly cleaned-up Saudi Ministry of Education religion textbooks. The copies he obtained were not provided by the government, but by teachers, administrators and families with children in Saudi schools, who slipped them out one by one.

Some of our sources are Shiites and Sunnis from non-Wahhabi traditions — people condemned as “polytheistic” or “deviant” or “bad” in these texts — others are simply frustrated that these books do so little to prepare young students for the modern world.

We then had the texts translated separately by two independent, fluent Arabic speakers.

Religion is the foundation of the Saudi state’s political ideology; it is also a key area of Saudi education in which students are taught the interpretation of Islam known as Wahhabism (a movement founded 250 years ago by Muhammad ibn Abd al-Wahhab) that is reflected in these textbooks.

Scholars estimate that within the Saudi public school curriculum, Islamic studies make up a quarter to a third of students’ weekly classroom hours in lower and middle school, plus several hours each week in high school. Educators who question or dissent from the official interpretation of Islam can face severe reprisals. In November 2005, a Saudi teacher who made positive statements about Jews and the New Testament was fired and sentenced to 750 lashes and a prison term. (He was eventually pardoned after public and international protests.)

The Saudi public school system totals 25,000 schools, educating about 5 million students. In addition, Saudi Arabia runs academies in 19 world capitals, including one outside Washington in Fairfax County, that use some of these same religious texts.

Saudi Arabia also distributes its religion texts worldwide to numerous Islamic schools and madrassas that it does not directly operate. Undeterred by Wahhabism’s historically fringe status, Saudi Arabia is trying to assert itself as the world’s authoritative voice on Islam — a sort of “Vatican” for Islam, as several Saudi officials have stated– and these textbooks are integral to this effort. As the report of the commission investigating the Sept. 11 attacks observed, “Even in affluent countries, Saudi-funded Wahhabi schools are often the only Islamic schools” available.

Education is at the core of the debate over freedom in the Muslim world. Al-Qaeda leader Osama bin Laden understands this well; in a recent audiotape he railed against those who would “interfere with school curricula.”

The passages below — drawn from the same set of Saudi texts proudly cited in the new 74-page review of curriculum reform now being distributed by the Saudi Embassy — are shaping the views of the next generation of Saudis and Muslims worldwide. Unchanged, they will only harden and deepen hatred, intolerance and violence toward other faiths and cultures. Is this what Riyadh calls reform?

” Every religion other than Islam is false.”

“True belief means . . . that you hate the polytheists and infidels but do not treat them unjustly.”

“Whoever obeys the Prophet and accepts the oneness of God cannot maintain a loyal friendship with those who oppose God and His Prophet, even if they are his closest relatives.”

“It is forbidden for a Muslim to be a loyal friend to someone who does not believe in God and His Prophet, or someone who fights the religion of Islam.”

“Just as Muslims were successful in the past when they came together in a sincere endeavor to evict the Christian crusaders from Palestine, so will the Arabs and Muslims emerge victorious, God willing, against the Jews and their allies if they stand together and fight a true jihad for God, for this is within God’s power.”

“As cited in Ibn Abbas: The apes are Jews, the people of the Sabbath; while the swine are the Christians, the infidels of the communion of Jesus.”

“God told His Prophet, Muhammad, about the Jews, who learned from parts of God’s book [the Torah and the Gospels] that God alone is worthy of worship. Despite this, they espouse falsehood through idol-worship, soothsaying, and sorcery. In doing so, they obey the devil. They prefer the people of falsehood to the people of the truth out of envy and hostility. This earns them condemnation and is a warning to us not to do as they did.”

“They are the Jews, whom God has cursed and with whom He is so angry that He will never again be satisfied [with them].”

“Activity: The student writes a composition on the danger of imitating the infidels.”

“The clash between this [Muslim] community (umma) and the Jews and Christians has endured, and it will continue as long as God wills.”

“It is part of God’s wisdom that the struggle between the Muslim and the Jews should continue until the hour [of judgment].”

“Muslims will triumph because they are right. He who is right is always victorious, even if most people are against him.”

The 10th-grade text on jurisprudence teaches that life for non-Muslims (as well as women, and, by implication, slaves) is worth a fraction of that of a “free Muslim male.” Blood money is retribution paid to the victim or the victim’s heirs for murder or injury:

“The greeting ‘Peace be upon you’ is specifically for believers. It cannot be said to others.”

“If one comes to a place where there is a mixture of Muslims and infidels, one should offer a greeting intended for the Muslims.”

“Do not yield to them [Christians and Jews] on a narrow road out of honor and respect.”

“Jihad in the path of God — which consists of battling against unbelief, oppression, injustice, and those who perpetrate it — is the summit of Islam. This religion arose through jihad and through jihad was its banner raised high. It is one of the noblest acts, which brings one closer to God, and one of the most magnificent acts of obedience to God.”