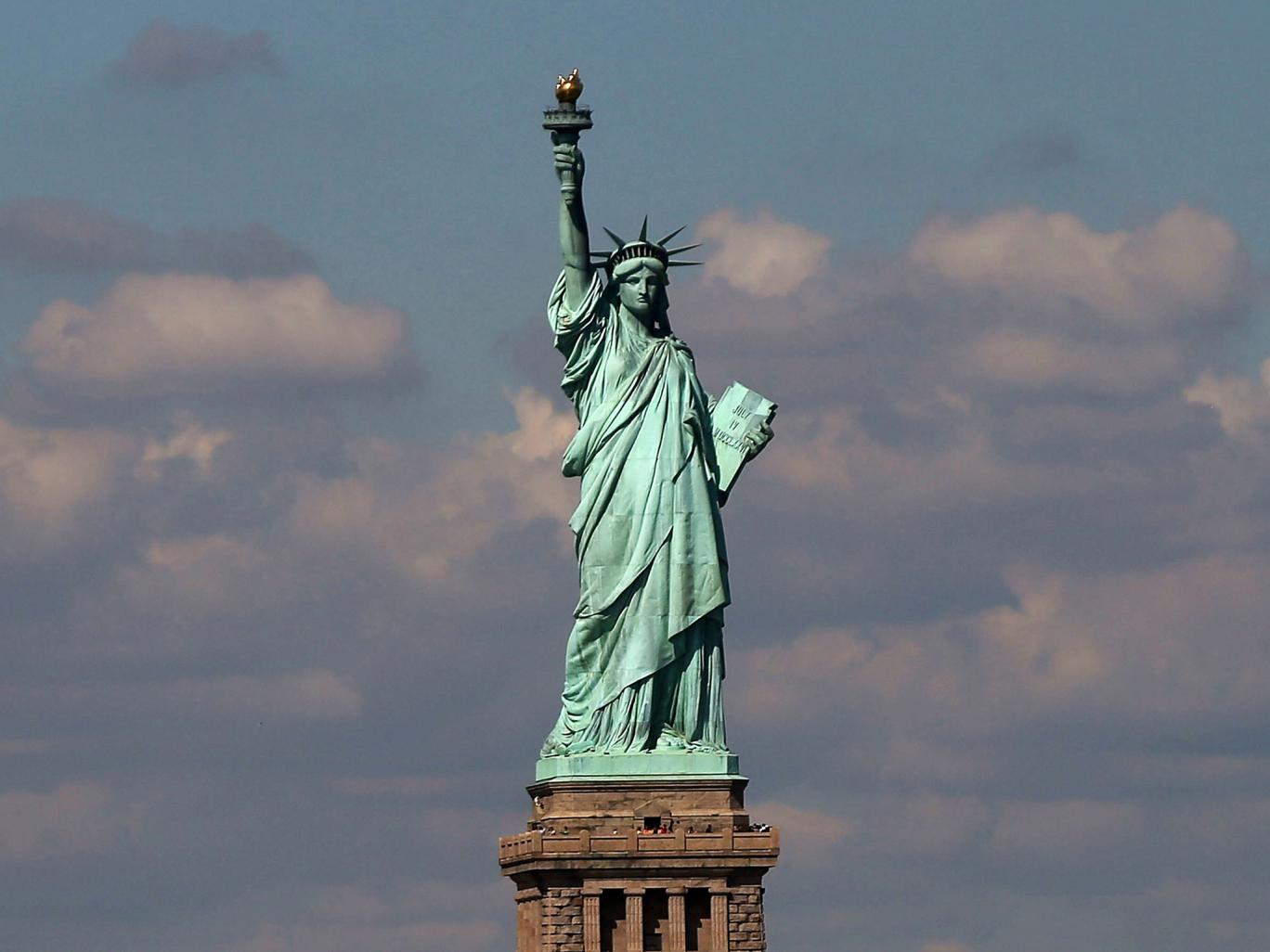 Current debates over the resettlement of Syrian refugees have prompted repeated invocations of the words on the Statue of Liberty: “Give me your tired, your poor/ Your huddled masses yearning to breathe free.”

The lines, written by poet Emma Lazarus in the late 1880s, were inspired by the hardships endured by Jewish refugees who arrived in New York after fleeing eastern Europe’s pogroms. They’re made even more relevant to the present moment, however, when considering the origins of the Lady Liberty statue.

The first draft for what would become the nation’s symbol of welcome to the “huddled masses”  was conceived by French sculptor Frédéric Auguste Bartholdi not for the Statue of Liberty but for an entirely different project: a lighthouse that would stand at the entrance to the Suez Canal.

According to historian Michael B. Oren, in his book “Power, Faith, and Fantasy,” Bartholdi would carve the likeness of an Egyptian peasant woman holding aloft a torch of freedom. The monument, twice as high as the Sphinx, would guard the waterway’s entrance and perhaps double as a lighthouse. Its name would be Egypt (or Progress) Bringing Light to Asia.”

Thus, as the Daily Beast’s Michael Daly pointed out on Wednesday, the nation’s symbol of all-American freedom and charity was in fact originally conceived as an Egyptian — and by default in those times, a Muslim.

For the next two years, Bartholdi worked on sketches and tried to persuade Isma’il Pasha, the then-Khedive (Viceroy) of Egypt, to finance his project. But the viceroy was bankrupt by 1871 and in no condition to support a monument as large as two sphinxes.

This compelled a “distraught” Bartholdi to take solace in a cruise to America. As he sailed into New York harbor, he saw the “egg-shaped” Bedloe’s Island and started considering a new location for his majestic vision, imbued with new meaning.

Not long before, Bartholdi had had a conversation with the French abolitionist and fervent supporter of the the North in the Civil War, Édouard René de Laboulaye, who proposed that France offer the United States a gift in recognition of the end of that conflict. After years of negotiation, it was decided that America would pay for the Statue of Liberty’s pedestal and France for the statue itself.

The dedication of the completed monument took place in October 1886. Oren describes the occasion in the following way:

“The thousands of spectators who listened as President Grover Cleveland pledged ‘not [to] forget that liberty here made her home’ gazed up at a creation that bore little resemblance to the one Bartholdi had visualized for Egypt. The Muslim peasant had been replaced by an idealized Western woman and the name of the piece changed from Bringing Light to Asia to Liberty

Over the next forty years, ‘Lady Liberty’ would provide millions of immigrants with their first glimpse of America, kindling their hopes for better lives and beckoning them with the possibility of freedom. For Egyptians, though, as for the many Middle Eastern peoples destined to come under foreign rule during that period, there would be no such illustrious symbols.”

So when politicians such as Ted Cruz suggest that only Christian Syrian refugees should be allowed to enter America, and critics respond with the ideals that the Statue of Liberty stands for, their statements have a particular historical resonance.

Had Egypt come by better financial fortunes, Bartholdi may have built a grand tribute to a Muslim peasant. But instead she was reincarnated as Libertas, a Roman goddess symbolizing personal freedom in America.