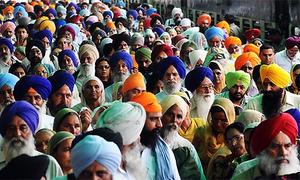 PESHAWAR: The district administration on Saturday patched up things between Sikhs and Muslims over a gurdwara dispute paving the way for the reopening of the place of worship closed since 1942.

“Members of Sikh community will resume the acts of worships in the ancient Jogiwara gurdwara soon after minor renovation and repairs are done to it,” said a Sikh participant of the jirga held in the office of the Peshawar deputy commissioner to resolve the longstanding dispute. The gurdwara is located near Hashtnagri locality.

A senior official of the district administration told Dawn that the gurdwara was closed before the creation of Pakistan due to a dispute between Sikhs and Muslims over the ‘privacy’ of those living in the neighbourhood, especially women.

He said the two religious communities had lost two lives to the dispute.

The official said no one had bothered to make efforts for the reopening of the gurdwara since its closure more than 70 years ago.

After the jirga, Riaz Mehsud told Dawn that Muslims and Sikhs had formally done an agreement on the reopening of the gurdwara.

“Now, Sikhs can worship in the gurdwara without trouble,” he said, adding that the agreement was a classical example of interfaith harmony in Peshawar.

The DC said the gurdwara’s building was historic and beautiful. He said he had been making efforts with the help of the police officers and local elders for the reopening of the gurdwara that bore fruit on Saturday.

According to the agreement, a wall will be constructed near the gurdwara to ensure ‘privacy’ of the girls enrolled in the adjacent school in line with the local culture.

The agreement also read a wall would be constructed on the roof of the temple to ensure ‘privacy’ of those living in the neighbourhood.

“The people using the street near gurdwara won’t face any disturbance,” it said, adding that in future, the locals will not object to Sikhs observing rituals in the gurdwara.

When contacted, special assistant to the chief minister on minority affairs Soran Singh said after the reopening of the Jogiwara gurdwara, Sikhs would get another place of worship in the city.

He said currently, Sikhs had only one gurdwara that was located in Mahalla Jogan Shah, which was reopened to worshippers in 1985.

The special assistant said the number of Sikhs in Peshawar had increased in the last one decade due to their displacement from different tribal areas for militancy.

He said the Jogiwara gurdwara needed minor repairs and whitewash for being closed for decades and when all that was done, it would be opened to worshippers.

“A grand ceremony will be held on the gurdwara reopening day,” he said.

Soran Singh said the reopening of the gurdwara would send out a positive message to the world about Pakistan and Peshawar.