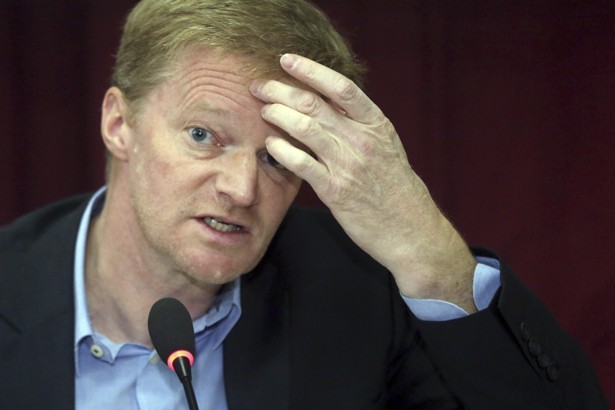 Christopher Stokes, the general director of Doctors Without Borders, right, talks during a press conference at their office in Kabul, Afghanistan, Thursday, Nov. 5, 2015. The international medical charity, known by its French acronym MSF, said wounded Taliban fighters were being treated in an Afghan hospital bombed by U.S. forces last month but that there were no armed men or fighting in the area. (AP Photos/Massoud Hossaini)

On October 3, the U.S. bombed a hospital run by Doctors Without Borders, (MSF), the Nobel Peace Prize-winning humanitarian group, in Kunduz, Afghanistan, killing at least 30 people. In the aftermath of the bombing, MSF called for a never-before-used mechanism of the Geneva Conventions to investigate the strike, and General John Campbell, the senior-most U.S. commander in Afghanistan, said the “hospital was mistakenly struck”—an apparent evolution of the U.S. position on what happened that day in Kunduz.The bombing came amid the backdrop of the Taliban’s capture—since reversed—of Kunduz. It was the Taliban’s biggest prize since the U.S.-led invasion of Afghanistan ousted the militant group from power. The fighting was bloody and the civilian toll high. Many of the injured—civilian, Afghan military, and Taliban—were treated at MSF’s Kunduz hospital.At a news conference in Kabul on Thursday, Christopher Stokes, MSF’s general director, said it’s “quite hard to understand and believe” the hospital was mistakenly hit. The group released an initial internal review of the strike that pointed out that U.S. and allied militaries were given the GPS coordinates of the hospital, and though Taliban members were treated at the facility, there were no weapons inside—in keeping with the organization’s rules. The report makes for chilling reading. One excerpt: “Patients burned in their beds, medical staff were decapitated and lost limbs, and others were shot by the circling AC-130 gunship while fleeing the burning building.” In its report, MSF said:The report detailed the week prior to the U.S. attack, starting September 28, when the MSF team launched a mass-casualty plan to receive an expected large number of people wounded in the fighting between the Taliban and Afghan forces.The next day, September 29, MSF says it informed the U.S. and others of its exact GPS locations because fighting had intensified.

On Wednesday, September 30, MSF says it received two Taliban patients, who “appeared to have had higher rank.” They were brought in by several combatants, and there were regular inquiries about their medical condition “in order to accelerate treatment for rapid discharge.”

The following day, October 1, the group says it received a query:

On October 2, the night of the airstrikes, two MSF flags were placed atop the facility, which was one of the few buildings in Kunduz still to have electricity. A nightly security check, conducted shortly after midnight, found the area “calm.” And, the report appeared to dismiss Afghan government claims that the hospital complex was being used by the Taliban in their fight.

The attacks began between 2 a.m. and 2:08 a.m. on October 3, the MSF report said. At the time, the hospital was treating 105 people. Between three and four were government combatants, MSF said. About 20 were wounded Taliban. Also present: 140 MSF national and nine international staff, and one delegate from the International Committee for the Red Cross. The airstrikes continued for a little more than one hour, and ended between 3 a.m. and 3:15 a.m., the MSF report said.

Here’s a log of calls made by MSF during the airstrikes:

And here’s what MSF says about the attack itself:

In Washington on Thursday, Captain Jeff Davis, a Pentagon spokesman, said MSF had shared its report with the military.

“We have worked closely with MSF to determine the facts” surrounding the attack, he said, adding the U.S. would continue to work closely with the group to identify both those killed and wounded “so that we can conclude our investigations and proceed with follow-on actions to include condolence payments.”