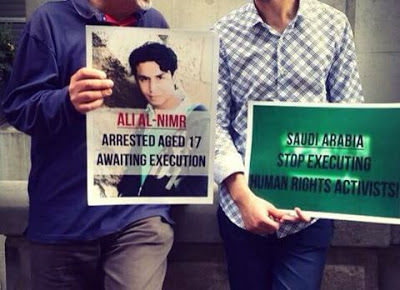 While the liberal corner of the internet is positively outraged over the arrest of a fourteen year old Texan boy who made a suspicious looking clock and brought it to school, the official change.org petition to save Ali al-Nimr from execution doesn’t even have 500 signatures.

As pointed out beautifully by American talk show cynic Bill Maher;They are going to crucify him. And then behead him, In case, you know, The crucifixion didn’t work. So yeah, if you haven’t used up all your heroism hash-tagging for the clock kid, may be do it for this guy (Ali Nimr).

Ali, 21, is the nephew of Shia cleric and activist Sheikh Baqr al-Nimr, who was jailed and sentenced to death for his fiery speeches against Saudi Arabia’s ruling House of Saud dynasty, which has controlled the Arabian Peninsula since the 1930s. Sheikh al-Nimr was detained and then sentenced to death on terrorism charges as well as “waging war on God” for his speech during anti-government protests in Qatif, a city that saw massive street protests followed by a bloody crackdown by the Saudi authorities in the wake of the Arab Spring.

Al-Nimr, who was 17 when he was arrested in 2012, has been sentenced to die by crucifixion, If that isn’t enough,Wahabi /Salafi’s will also behead Ali before they rope him up on to a piece of wood, NGOs claimed earlier in September, after a closed trial on charges ranging from possession of firearms to encouraging pro-democracy protests using his BlackBerry in Saudi Arabia’s restive Eastern Province.

When al-Nimr’s first trial was held on14 feb 2012, he called up his family and asked them the meaning of Haraba (brigandage). Ali, then 17, was not able to understand the charges laid against him by the court.

Activists and campaigners allege al-Nimr’s conviction is politically motivated as he is the nephew of Sheikh Baqr al-Nimr. They also claim Ali Nimr was tortured after his arrest in 2012 and forced to sign a confession.

During his “trial”, Ali raised the claims of torture but no investigation took place and the court used the confession to sentence him, the charity claims.

Zena Esia, a research assistant at the European Saudi Organisation for Human Rights, said it was still not clear whether King Salman had signed Ali’s death warrant after his appeal was denied earlier in September. As is the custom in Saudi Arabia, family members are not informed until after executions have taken place, so Ali could be put to death at any time.

It was revealed this week that Ali’s appeal against the death penalty has been denied and he will be put to death by the Saudi authorities, first beheaded and then his body strapped to a cross and left to rot.

According to British legal aid group Reprieve claims that Ali was arrested without a warrant, has never been given access to his lawyer and was not informed of the charges until halfway through the proceedings.

A closed appeals process — which he was not invited to and occurred without his knowledge — dismissed any remaining possibility that the nation’s legal system would prevent his biblical execution.

“No one should have to go through the ordeal Ali has suffered — torture, forced ‘confession’ and an unfair, secret trial process, resulting in a sentence of death by ‘crucifixion,'” Maya Foa, director of Reprieve, said in a statement.

A Scottish politician raised Ali’s case in parliament this week. She spoke eloquently and she spoke in strong opposition to a practice that has no place in our modern world.

“How in 2015 can a supposedly civilized country impose such an inhumane and merciless penalty on any of its citizens, let alone one so young?” MP Margaret Ferrier said.

Nimr’s family have avoided the media and kept relatively quiet since his arrest for fear of inflaming the situation, but after his appeal was denied, both his mother and father took to Twitter to highlight his case.

The first word that his family received about his case was this week, when it was revealed that his appeal had been turned down.

Ali’s family allege that his connection to Sheikh al-Nimr is the real reason for the case, as well as the ongoing crackdown against Shia activists in the east of the country, which has gone largely unreported due to heavy restrictions on both the local and international media in Saudi Arabia.

The case has caused massive criticism internationally after Saudi Arabia’s UN ambassador was appointed chair of an independent panel of experts at the UN Human Rights Council in June.

Whilst Ali al-Nimr is set to be executed at any moment.Ali was supposed to call his mother on Tuesdays (09/22/15) but there was no phone call. Fears surrounding his execution heighten.

The UN decides to award the Saudi ambassador a key role on a human rights panel.

We leave the comments to you 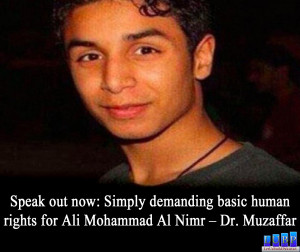