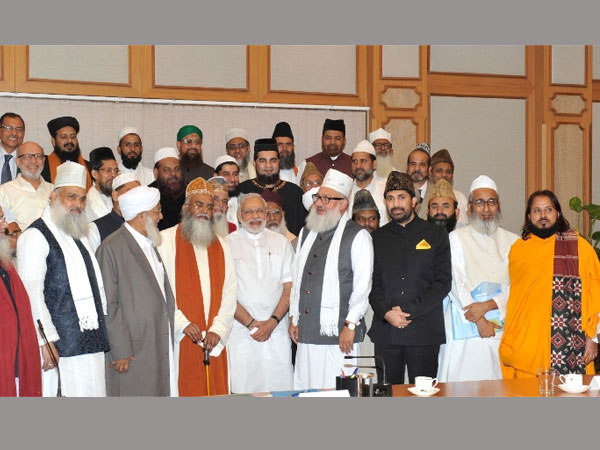 A delegation of 40 Barelvi Sufi Scholars on Thursday, Aug 27 called on Prime Minister Narendra Modi. The event which was organized by the National Security Advisor, Ajit Doval aimed at sending a strong message in the sub-continent that there are a large number of moderates who do not subscribe to the radical thought that has created outfits such as the ISIS and al-Qaeda.
With outfits such as the ISIS and the al-Qaeda gaining in strength and the problem threatening to snow ball into a major one in India as well, this meeting of the Prime Minister with the 40 Barelvi Sufi Scholars is of extreme importance. Narendra Modi meets Sufi Scholars The meeting aimed at conveying that there is a moderate line of approach which is still present and this should over power the radical school of thought. A message to radicals During the meet in which the NSA was also present, the Prime Minister said that forces of extremism are attempting to weaken the Sufi ideology today.
He added that it is essential for Sufi saints and scholars to counter these forces through various avenues including on social media, so that the ideology of extremism does not take root in India. The Prime Minister said that the tradition of Sufism has kept evil at bay, wherever it has continued to flourish. Sources say that the meeting is significant and there is a need to encourage the moderate voices. Currently there are several radicals who have crowded the internet and push forth a wrong ideology.
This has led to several youth being misguided. Hence it becomes all the more important to support persons with a moderate approach and ensure that their message is conveyed loud and clear. Modi and Sufi scholars The delegation that met with the PM on Thursday was clear that there is a spread of terrorism in the name of Islam and this poses a danger to the world. They added that there is need to spread awareness among the Muslim community that organizations such as the ISIS and Al-Qaeda, do not represent the path of Islam.
The PM and the NSA want this message to be conveyed loud and clear. A meeting with the Prime Minister would only mean that this message reaches a larger sect of people and this school of thought should be made the norm in a bid to overpower the radical school of thought. The problem of radicalization The ISIS threat is looming large over the world. In India the exact number of youth with the ISIS is 11 as of today. The government of India has taken a very different approach to the problem and has been successful to a large extent.
The message to all the police handling cases in which youth have attempted to join the ISIS is counsel and not convict. This approach has helped to a large extent and most of the youth who have been brought back are not bitter, but have a sense of realization, officials also say. However the Indian government is aware that it cannot relax and the process to curb radicalization is a continuous affair.
While roping in the elders from the Muslim community to counsel the youth is one part of the programme, the other would be to have such meetings with moderates and ensure that the whole of the sub-continent gets the message loud and clear. Modi meets sufi scholars It is a persistent threat, says an official. We cannot sit back and relax as terrorist groups with the help of the radical thinkers make attempts every second to put forth their agenda. The situation is largely under control in India today.
However it can blow up anytime if we are not careful, the official also adds. Who are the Barelvi Sufis? The Barelvi Sufis are around 200 million in number in South Asia. The name Barelvi is derived from the Bareilly town and was founded by Ahmed Raza Khan. Their movement is influenced by Sufism and their movement has always taken a strong stance against the Talibanisation of Islam. While organizing several anti-Taliban protests in India, they have termed the Taliban movement to be unjustified sectarian violence.

According to globalsecurity.org, “the Barelvis follow many Sufi practices, including use of music (Qawwali) and intercession by their teacher. A key difference between Barelvi and Deobandi that Barelvi’s believe in intercession between humans and Divine Grace. Unlike the Deobandis, the Barelvis see the Prophet Mohammad as more than a man, a part of the divine light of Allah. This doctrine gives rise to a form of Islam that provides a space for holy men and esoteric practices and graves appear to be often more ornate than those found within Deobandi communities.