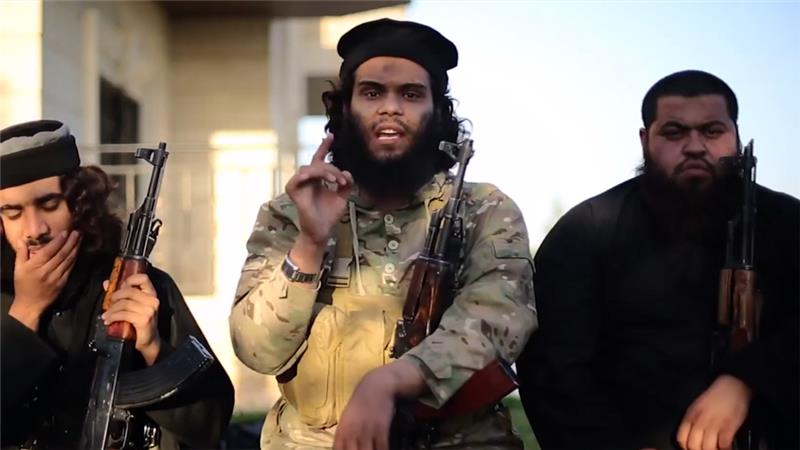 The Islamic State of Iraq and the Levant (ISIL) group has threatened the Palestinian armed group Hamas, vowing to end the faction’s rule in the territory.

In a 16-minute long video shared by social media accounts sympathetic to ISIL on Wednesday, fighters based in Syria’s Aleppo province condemned Hamas for its crackdown on Salafist groups in the Gaza Strip, and its failure to implement a rigid enough interpretation of Islamic law.

“The point of jihad is not to liberate land … but jihad as defined by God, is fighting for and implementing the law of God,” said one masked fighter, who further condemned Hamas for its dealings with Iran and Lebanese Shia movement Hezbollah, as well as “nationalist”, “secularist”, and “communist” factions.

“They raise their children to respect this (Palestinian) flag,” the fighter said, telling Palestinians that Hamas could not secure their freedom.

“The road to liberate Palestine goes through Iraq and we (ISIL) are getting closer, day by day … while they (Hamas) are moving away from that goal.”

Another fighter condemned the Palestinian faction for referring to ISIL and its supporters as “khawarij”, a term used to refer to a group of Muslims in early Islamic history, meaning “those who have transgressed”.

The fighter later refers to ISIL’s seizure of parts of the Yarmouk refugee camp in the Syrian capital of Damascus after clashes with Palestinian groups, including a faction associated with Hamas.

“What is happening today in Syria, especially in the Yarmouk camp, we swear by God, will happen in Gaza,” the fighter said.

Hamas has clamped down on alleged supporters of ISIL in recent months, in a campaign to snuff out purported attempts by the group, which controls large parts of Syria and Iraq, to establish a foothold in Gaza.