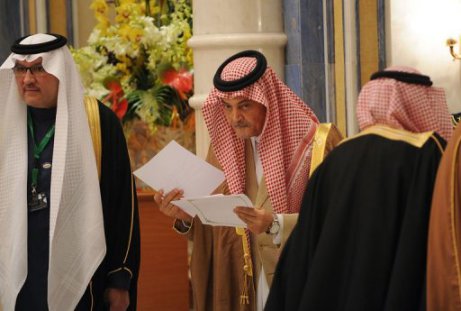 While only a small portion of the half a million Saudi cables have so far been released by WikiLeaks, a quick scan of the available documents that relate to Iraq reveal three consistent approaches adopted by the Kingdom in an effort to extend its influence in the country: financial and political support for Sunni Arab tribes, politicians and Kurdish actors that are willing to undermine the central government in Baghdad; close communication with Baath Party officers, financial support and political asylum for families of high-ranking former officials; and regional diplomatic efforts aimed at undermining the sovereign legitimacy of the Iraqi state.

Here are ten of the most insightful leaked cables concerning Iraq:

Saudi Arabia’s foreign ministry proposes a three-stage plan to establish connections with, and ultimately co-opt, Sunni Arab tribes and politicians in Iraq. The stated goal is to undermine the government of Prime Minister al-Maliki and nurture assets that are sympathetic to Saudi Arabia’s policies in Iraq. The cable recommends close coordination between the Kingdom’s foreign ministry and intelligence agency, and suggests inviting co-opted Iraqis on a regular basis to the Kingdom in order to “strengthen relations and exchange views and information”.

Another cable reveals how it is inundated with requests from tribesmen to visit the Kingdom, primarily in search of financial assistance. The ministry notes that some of these requests have come from individuals who reside outside of Iraq and have little influence on the ground. The memo goes on to recommend that Sunni tribes with deep connections should be sought out in order to further the Kingdom’s national interests.

Numerous cables reveal how a wide spectrum of Iraqi Sunnis that are motivated by financial and political gains have requested to visit Saudi Arabia. They include the notorious Erbil-based Anbari sheikh Ali Hatem Sulaiman who famously called for violent attacks against Iraqi Security Forces; and other Dulaimi tribesmen.

The foreign ministry cable notes how a request from Iraq’s official Hajj (pilgrimage) body for an additional 2,000 visas was rejected by Saudi authorities. Instead, some 6,000 visas were secretly offered to leaders of the Sunni al-Iraqiya bloc: Ayad Allawi, Tariq al-Hashemi and Usama al-Nujaifi. Only Allawi’s 2,000 visas were eventually processed.

Saudi Arabia officially allocates a strictly limited quota of Hajj visas for all Muslim countries. Thus, Allawi would have taken advantage of his allocation to enhance his political standing and reward those loyal to him.

A cable from the Kingdom’s embassy in Jordan refers to two letters addressed to former Iraqi vice president Tariq al-Hashemi from the Saudi crown prince and the head of the intelligence agency. An arrest warrant related to terror charges had been issued by Iraqi authorities for Hashemi, who was residing in Erbil at the time,

Saudi’s intelligence agency approved a request of financial assistance for a Kurdish Islamist charity in the KRG and allocated 2 million riyals (approximately 530,000 USD) in aid, in addition to political and media support.

Saudi foreign minister Saud al-Faisal concurs with the intelligence agency’s recommendation to host Kurdistan Region of Iraq’s Masoud Barzani in Riyadh because of his opposition to Prime Minister Al-Maliki.

A cable from the Saudi embassy in Tehran notes that KRG president Masoud Barzani asked Iran to mediate on his behalf in order to persuade Prime Minister al-Maliki to loosen up the revenue-sharing arrangement between Baghdad and Erbil (such as allowing independent Kurdish oil exports). Maliki tells Iran that he will not budge and will abide by the constitution.

The son of former vice president Izzat al-Douri requests a meeting with the Saudi ambassador in Sanaa in order to pass on a message from his father to the Saudi leadership. Al-Douri heads the main wing of the outlawed Baath Party and is responsible for countless attacks on US and Iraqi personnel since 2003.

The family of former deputy prime minister Hikmat Azzawi, who was number 45 on the Iraq most-wanted playing cards, request political asylum in the Kingdom. Their request is passed on to the relevant committee and the Saudi embassy in Amman decides to provide them with financial support in the meantime.

Another foreign ministry cable discusses the case of Adnan al-Dulaimi, who served as head of Saddam Hussein’s legal defense team, and has requested asylum in the Kingdom. The cable notes that he still maintains “extensive relations with the Baathist leadership in Jordan and Syria”.

An email sent to the Saudi embassy in Jordan, purportedly from Saddam Hussein’s Republican Guard, warns all Arab countries not to attend the Arab League Summit in Baghdad in March 2012. The group threatens to wreak havoc and target all attendees if the summit is held in Baghdad.

Foreign Minister Saud al-Faisal expresses Saudi’s dissatisfaction at the decision to host the Arab League Summit in Baghdad because it would “hand Iraq over to Iran”, and reasserts the Kingdom’s instructions to its Gulf neighbours to ensure that their representation at the summit is limited to the level of ambassadorial envoys to the Arab League.