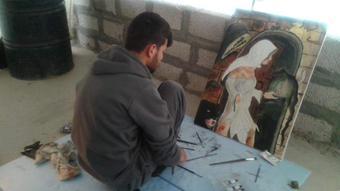 The barbaric treatment of non-Muslims and Shia in Iraq at the hands of so-called Islamic State of Iraq and Syria (ISIS) or Daesh has alarmed the world. The Christians have been fleeing from northern Iraq where they have been living for thousands of years. Shia Muslims have also been hounded, killed and dozens of their mosques have been razed. Seen as deviation from the pure conception of Islam, scores of Sufi shrines and tombs were also demolished under the literalist interpretations of Islamic faith. Another minority group, the Yazidis, have been a victim of ISIS ideology. Yazidis to flee their homes, their women were captured as sex slaves and now thousands are refugees in Kurdistan, Syria and other neighboring countries.

The little known Yazidi community of Iraq found itself under global spotlight for all the wrong reasons. Last summer, the ISIS attacked Yazidis in northwestern Iraq forcing 40,000 men, women and children to flee to Mount Sinjar and 130,000 to Kurdish north. Later, in October 2014, a report claimed that ISIS executed 5000 Yazidis while 7000 were taken as sex slaves. These horrifying statistics found greater credibility once UN accused ISIS for genocide of Yazidis in March 2015. Yazidis are a Kurdish ethnic and religious minority found in parts of Iraq, Turkey, Syria and Iran. They have ancient roots in Iraq and are one of the oldest communities in the region. Even though they respect all religions and scriptures the Islamic extremists target them as devil worshippers.

The besieged group derives its name from a Persian word ‘ized’ denoting an angel or a deity and ‘Izidi’ that means, a worshipper of God. Yazidis believe that Yazdan, the Supreme Being, created the world and entrusted it to seven angels. And the Yazidis worship the fallen angel – Tawwus, or the Peacock Angel – as one of the seven angels. Yazidi faith – an extension of the ancient Zoroastrian belief system – incorporates elements from Christianity, Islam and Judaism ranging from baptism (from Christianity) to circumcision (from Islam) to reverence of fire as a manifestation from God (derived from Zoroastrianism). Recently, I came across a young Ezdi, Nasser H. Kassow from Shingal (Sinjar) who is a student of English at a University in Zakho. Kassow had tweeted some of his impressionistic paintings on the state of Yazidis. As we engaged on social media, I interviewed him via Skype to know a little more about his work. I was struck by the raw imagery, the somber mood of these paintings. Often what long reports cannot convey, a simple image communicates far more effectively. Kassow told me that when ISIS occupied Mosul in June 2014 within days they blocked the surrounding roads to exert their control. “The only route between Shingal and Kurdistan was blocked and I couldn’t go home to be with the family.” Later, his family found a way to move out.

“In recent months all my family has moved to Kurdistan, leaving everything behind.” Some of his family members live in Khanky camp in Duhok area of Kurdistan. “They are living among thoudands in harshest of conditions that man can endure” adds Kassow. In the summer it is way too hot and during the winter the tents can’t be heated due to the risk of a fire. In April 2015, Peshmerga forces, Kurdish fighters backed by U.S. military, repulsed an attack from IS militants and launched a counteroffensive in Shingal. Intense fighting followed for over a month in which more than 30 militants were killed. US-led airstrikes helped Peshmerga forces to hold ground and make significant advances in the fight against ISIS. Incessant air strikes from US forces have helped but without ground forces the battle is an uphill one.

Kassow also related how his uncle Darwaish “stayed with his wife and newborn child in Mount Shingal for days with nothing to support their lives.” Among the thousands who fleed on foot and walked for miles to enter Syria suffered unbelievable tragedies. “Hundreds of children died of thirst and hunger and hundreds of old men and women died due to the weather conditions.” Kassow’s uncle finally arrived in Kurdistan “immensely tired, with ripped clothes and a beard.” His feet had been ripped apart due to endless walking. Kassow’s anguish found a medium in self-taught art. Fleeing their homes, then suffering on the top of a desolate mountain top where aid arrived after days and weeks and the treatment of his community have shaken him. I could sense the nervousness as he talked and the haunting sadness in his voice. But as they say, art is therapeutic. The ISIS has been attempting to ‘purify’ the lands it captured after the exit of U.S. troops from Iraq and the subsequent anarchy and dismantling of the fragile Iraqi state. The brutality with which Yazidi girls and women were treated is harrowing. A recent Human Rights Watch report highlighted organised rape, sexual slavery and forced marriages. Many girls are still missing and the Interviews conducted by the rights group revealed that ISIS militants had raped even 12-year-old girls. Muslims across the globe have been shocked by these heinous criminal acts perpetrated in the name of Islam. ISIS in its publication Dabiq, holds that Islamic faith permits sex with non-Muslim “slaves” and they can be captured, sold and distributed. But this is simply a cynical literalism to justify horrors. The historic Al-Azhar’s Grand cleric Shawqi Allam in Egypt said that ISIS flouts Sharia and humanitarian laws and in reality ISIS were harming Muslims. However, the problem is that there is enough material in the ninth and tenth century jurisprudential literature that justifies this maltreatment. This is an urgent issue that the Muslims worldwide need to address.

Kassow intends to finish his studies and find a decent job to take care of his family. He continues to paint feverishly as it enables him to deal with the trauma and helplessness that his neighbours and family have suffered. Artistic expression also becomes a vehicle to fight back and social media has been a tool for him to reach out to the world. I would have not met him online otherwise.

“We can endure hunger, heat, cold and thirst…but we can not live without our kidnapped women”, Kassow tells me before signing off. “We shall fight for our place in this world… and our dignity must be restored even before our land is freed.”